Really, there's nothing we'd rather do in the first days of the 2014 season than start the transfer rumors for 2015. But this one should be a fun one to follow. The season is likely to be dominated by the buzz around the birth of the Alonso team for 2015. And the first bulletins are a doozy.

The background of course is the entry of Formula 1 superstar Fernando Alonzo as a team-owner in cycling. After the attempt to take over the Euskaltel World Tour license failed last fall, Alonso focused his efforts on establishing an all new teamstructure for 2015. His project and it's ambitions are already announced with the UCI and they will be seeking a WT license for next season. Complicating this is the new UCI policy that mandates that new teams must prove themselves at the ProConti level before they are awarded World Tour status. We'll get back to the implications of this later.Reportedly a main sponsor from Dubai is already secured for a five year period which presumably makes this the biggest project in cycling since Team Sky got off the ground. This may be more hurried but it looks every bit as well funded and serious and it's potential direct impact looks huge, bigger than Sky in 2010 for sure

Now first of all, new contracts can't be announced until the transfer window opens up on August 1 so everything we hear between now and then is going to be pure speculation, no matter how certain Gazzetta dello Sport sound in their breaking stories. The big first news is the rumored agreement with Peter Sagan on a two year contract worth 6.6 million Euro. That means they would have the most prolific winner in cycling secured and in theory wouldn't need to do much more than build around him and they would still have a decent team. But this isn't going to be that kind of team obviously and Sagan's current team is a good example of why it wouldn't be a good idea. Faced with the loss of their slovak star it's hard to see what Cannondale are going to build on for the coming ears now that they have let their stageracing super-squad slip out of their hands over the last seasons. One rumored solution to their dilemma and also Alonso's inability to gain WT access from year 1 is a merger between the two projects. The bike manufacturer Cannondale are of course eager to keep the most bankable star in cycling on their bikes and nowadays they not only sponsor the team but are in fact majority owners in the management company behind the team. Most importantly that means they control the WT license and can make the deal happen.

Going in with Cannondale though would once again mean that Alonso is partly hamstrung and committed to a set of riders under contract. Allegedly that was part of the reason the Euskaltel deal fell through and you could see how he would be hesitant to go down that road again. Going ProConti for a year makes perfect sense to me but for some reason it doesn't seem like they feel the same way. A one year building period would seem smart, they can pick a bit more select calendar and not have the demand to race everywhere all the time. It's not like a team of the calibre this isn't going to get invites to wherever they want basically. That gives the team a bit of space to work out first year kinks. That those kinks will come, no matter how well funded and prepared a team, was shown by Sky if nothing else. And should they have to sit out one or two races it's not the end of the world. It's a bit unclear to me what the huge deal to be in the WT right away is but if Alonso is so passionate about this it's hard to get why he wouldn't take the time to build the team he really wants? Unlike the stressed dilettante (as far as sport is concerned) Oleg Tinkov Alonso has worked in and around super-professional sport-organizations for his whole career and knows what it takes to make them work.

On the rider side apparently the second big target for Alonso is spanish stageracer Joaquim Rodriguez who is under contract with Katusha for 2015. Alonso has said that they will only go after riders that are free on the market for 2015 but these are the pesky little details that rider agents are paid to get around behind closed doors so that teams and riders can make bold statements about "fulfilling lifelong dreams" and "matches made in heaven" and so on. Bringing J-Rodaboard should certainly make less dependent on Sagan. With Sagan and Rodriguez as the top stars this would pretty much look like a wet FSA DS-dream-team.

Less dreamlike is the rumored management team. Paolo Bettini, the almost smiling former double World Champion, is apparently the intended manager. Bettini inherited the job as Italian national coach after his successful good friend Franco Ballerini but hasn't had any notable success in that role so how much he brings to the table remains to be seen. Nothing so far indicates that he has the qualifications to build a top World Tour team but who knows. Spanish former super-domestique of Lance Armstrong, José Luis "Chechu" Rubiera is said to be in place as a DS. The "medical" history of both these two lend little credibility to the stated "zero-tolerance"-policy that Alonso has said will be in place in some version or other. For all his money and fame it's easy to forget that Alonso is "only" a 32 year old athlete and with little practical experience of pro cycling so it's easy to see that whoever ends up in the management team here can have quite an influence on where this project goes. Color me un-impressed so far. 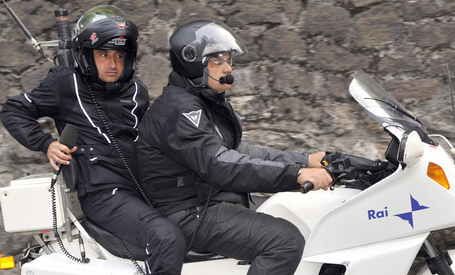 Bettini in another role that didn't really work out. (Photo: AFP Damien Meyer)

After an almost cataclysmic 2013-14 transfer-market with a net loss of teams, no new projects and a huge amount of riders finding themselves out of contracts, forced to step down to lower levels or retire from the sport, 2015 could be very different with the arrival of Alonso. At least at the top end of the sport where we will have Alonso and Tinkov will be in competition to re-enforce their (presumably) wealthy teams. Whether we see some trickle down effects might very well depend on whether Alonso choses to go the merger-way or if his team will make up an entirely new unit. If the former is true then the net-gain of positions might not be affected as much and there will be fewer newly created job-opportunities. Either way, this project should profoundly affect the transfer-market and rumormill throughout the season. Just going by the attention a small appearance at the Dubai Tour got it's going to be crazy until they make their announcement at the Tour de France and when they can start confirming their signings.