Don't worry people, the end of the cyclocross season means the Spring Classics are nearly here.... The last SuperPrestige is always one worth watching, especially in the mud, and streamed live - albeit later than usual. It's Middlekerke, the Noordzeecross!

Share All sharing options for: The last SuperPrestige of the season - Noordzeecross Middelkerke, LIVE!!!

Here's how tgsgirl described it in her superlative CX Calendar:

Noordzee: that's the north sea. Sea, that means dunes. The name is mightily deceptive though - as they race in a sports park some ways away from the salty water. A shame. There's still some sand in the Noordzeecross though - some sand upon which maybe Sven Nys can get his thirteenth - yes thirteenth - Superprestige overall.

Now, that was at the start of the season - today there's one man standing in the way of Nys domination - Niels Albert!  Here are the standings Nordzeecross before the final race:

There are 1 point increments between each finishing place - so if Nys wins, and Albert is 6th or further back, Nys could win the series, and there's lots to fight for in that top 5.  Fun times!

It will be streamed on Vier as usual, and there's more information on the race website, including the course map.  Join us to talk through the race as usual in the comments! 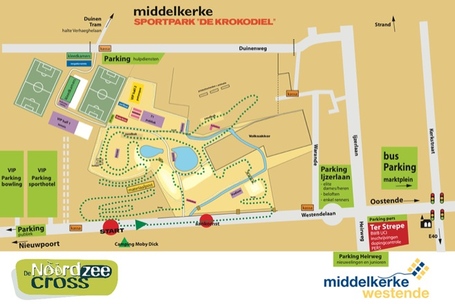