Share All sharing options for: Stars, stars, stars at Tirreno-Adriatico

Some of the busiest days of the season are ahead of us. Paris-Nice is already underway and starting Wednesday we have parallel races going on as Italy's second biggest stage race starts off with a team timetrial. Tirreno-Adriatico which is a big race in itself also works as the warmup for the country's two biggest events. To win the Milano-Sanremo it has almost become a necessity to prepare yourself by riding Tirreno and for the bunch of GC riders aiming for the Giro d'Italia this is their first real test. Just as there seems to be some intangible advantage to be gained from preparing for the TdF in the other french race, the Criterium du Dauphíne there seems to be some connection between the T-A and the Giro. Perhaps it's merely about getting accustomed to the surroundings and the rhythms of an Italian stagerace? Either way, all but one of the pre-appointed favorites for the Giro in May are here on the start-line. And it looks as if we are in for a memorable edition of the race.

Hey! New crazy uphill finishes! This time it's the weird and wacky Muro di Guardiagrele at the end of stage 5 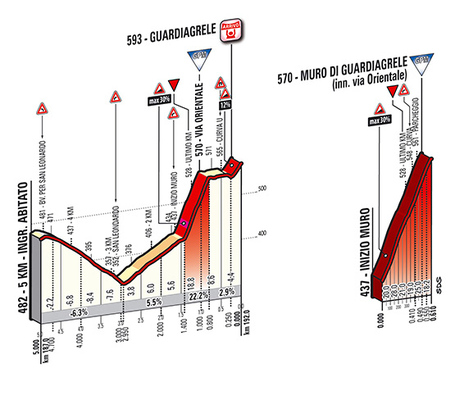 That's at the end of the 194 km stage where they have gone over the Passo Lanciano (aka. the lower part of the climb to Blockhaus) so that is going to sting. More nasty stuff dug up by the routeplanners at RCS, I think this is the raceorganizer-equivalent of pulling the legs off flies. It doesn't seem a healthy thing to spend your time looking for these kind of torture-roads but god bless them for doing it.

What's also new is that everyone who isn't french or batshit crazy is doing this race and not Paris - Nice. I think only Sylvain Chavanel, some other random Frenchmen and Marcel Kittel's grandmother opted to do Paris- Nice voluntarily. Practically everyone who has a reasonable shot at winning a GT, plus most of those who really don't but think they do, have opted for the "two badass mountain-stages, two Timetrials and assorted other"-Tirreno Adriatico this year. Will it lead to a better race? Who knows, the stages are hard but how many are prepared to go really hard at this point?

The course. No doubt one of the better looking one-week courses I can remember seeing. It has it's by now standard TTT start and San Benedetto del Tronto timetrial finish plus two real mountain stages and three sprint stages. No surprise why it attracts all but the puncheurs really. The charm of the feisty little sharp uphill finishes have sort of lost a little allure nowadays when the Vuelta has 53 of them every year. Also, the way the peloton looks right now they do all tend to end roughly the same (and there's not an Italian winning them all) so that makes them less fun.
There's some interesting team dynamic going on too. Sky, where it will be fun to see the division of labor between the late-appointed GC captain Porte and Wiggo who by all accounts is thrilled to work for someone else. That totally sounds like Wiggo so let's see where it leads. I have no idea where that guy's head is this season but this might give us an indication. Katusha is also resting J-Rod, presumably to give Dani Moreno a chance to be his own man but how many courses better suited for Rodriguez are we likely to see? And speaking of well suited, we'll see Thibaut Pinot on a great course for him as well but Iäm guessing FDJ's general suckiness in the TTT will see him hunting stagewins if anything.

What's also interesting is that as hard as the mountainstages are, this race has also managed to lure the biggest sprinters. Milano Sanremo is of course the reason for that. The big names Kittel, Greipel and Cav are here gearing up for an assault on the new and tamer MSR route (except Kittel, he's just here to kick everyone's ass).

On the Muro di Guardiagrele no doubt. Stage 4 has some serious heavy climbing certainly but the regular "pedalabile" climb to the finish shouldn't give the big differences unless Sky goes on some brutal black-train-rampage to shed the opposition. The day after on the other hand has a big late climb to Passo Lanciano followed by a quick drop and then immediately the short but brutal final climb including the muro and we should see the winner emerge there. If not, there's the 9 km timetrial at the end but I'll bet that will just be there for Tony Martin to amuse himself and decide the lower placings. So if your boss has unreasonable expectations that you show up to work each and every day, Sunday March 16 is the day to fake typhoid, stomach cramps or menopause and stay home to watch the race.

There's going to be the obvious suspects of course. Richie Porte is going to be a factor as will Quintana and Horner. Yes, old man Horner, you heard me right. Just look at the climbs, this is perfect for him and presumably he needs to show Lampre that he isn't a complete dud if they are to put some faith in him for the Giro. Beyond that is where it gets interesting. In his general quest to be a player everywhere it will be fun to see what Kwiatkowski will do here. We saw him do big mountains in the Tour last summers so with the form he's on I don't see what this race could throw at him that he can't handle. Then there's a Mollema who looked sharp last we saw him and most importantly wants to start winning things. There's only so much fun you can have with top 10s in the GTs, a little winning never hurts. Same goes for Talansky and Martin on Garmin. The climbs might still be a little too steep to fit the American but Martin should be right at home here and the TTT should work in their favor. 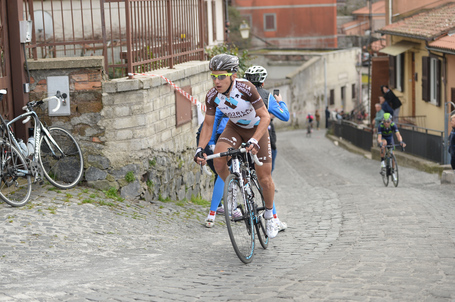 Top outsider has to be tiny Domenico Pozzovivo though. After killing it at Roma Maxima he is clearly primed to win this thing. The climbs are tailor-made for him and with his newfound timetrial prowess the final stage won't pose a problem. Betancur has hauled his fat behind to France so he won't be a rival and instead Ag2r have guys like Gretch and Peraud here to make sure the TTT isn't a complete disaster. I don't see how Pozzovivo doesn't win, or at least comes very very close, this week.