Things are getting interesting, despite what you may hear

Today Paris-Nice reaches the sun. Or, maybe not today, maybe more like tonight. In which case there won't be any actual sun. But by 24 hours from now, all will be lovely and spring-like. Not that that's been a problem... the whole "race to the sun" concept is about as true as "global warming ate my baby." Does global warming eat children? Not on a daily basis, but over a century that will appear to be true, more or less. And Paris-Nice will generally get warmer as it progresses, except when it doesn't. Weather this weekend will be more or less identical in both Paris and Nice.

What? Am I making small-talk? Huh, I suppose I am. Is that because I'm reluctant to launch into the real subject, whether or not this is a good race? Hm, I suppose it is. Hey, what do you think of my new kit?

OK, fine. We've reached the critical juncture of Paris-Nice, with four days left (including the one rolling off the line shortly), and four stages of much-criticized middlingness. But with a tight GC containing plenty of quality, it could be that the reputation os Paris-NIce is what saves it in the end. Young guy in need of notoriety? Been a classics guy all your life? Accustomed to getting in your miles here while Sky nail the time trial and seize yellow? Well, suddenly you're ten or twenty or thirty seconds out of the lead in a World Tour stage race. Your motivation just got real. 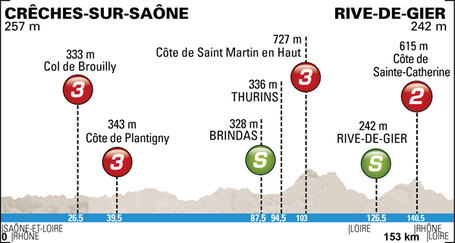 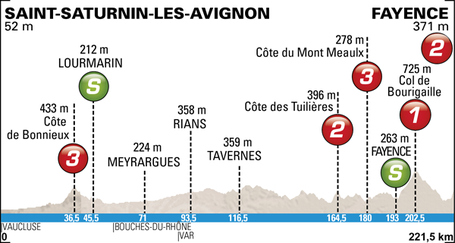 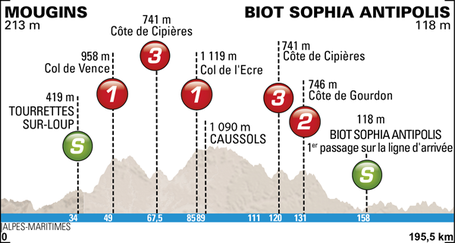 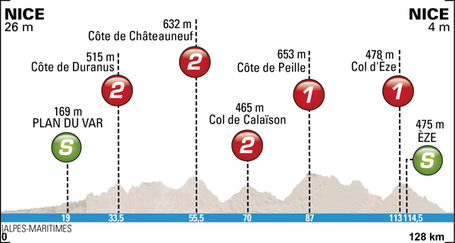 Basically, two tricky finishes likely to produce small gaps; one nothing-burger (today), and a mountain stage which will kill off any GC hopeful who can't climb. Not a lot to work with, I know, but if nothing else the order of these stages makes good sense, and anyway lack of separation means close competition. Definitely some upside in there.

What I expect is that today's stage won't produce a major reshuffling, other than to perhaps (but maybe not) dispatch John Degenkolb from the podium. He's the only "sprinter" in the lot, but unlike some of his fellow fast-finishers, he's not completely hopeless on what looks like a classics-style course. The usual attacks will bring slight changes, but no more. Tomorrow's finale should decisively winnow the field down to guys who can climb, with a 7km ascent of the Col de Bourigaille so close to the line. It's a touch under 6% average, so the climbers' teams will need to set the pace to "blistering," but at that length the opportunity to shed several lowland types is there.

This means that by the time Saturday's Queen Stage begins, we should know who the real contenders are. While the race finishes in a technology park whose mail difficulty, according to Wikipedia, "was to relate people and to create a sense of community," the race should be relatable at worst and exciting at best. Five rated climbs means that the peloton will be down to the climbers and their assistants -- with emphasis on the latter. The run to the line is uphill, briefly, making for some late-race shenanigans and precious seconds on the line, but that's 60km after the last summit. Team power will go a long way in the last two hours of this stage. Sunday, finally, will be a traditional Col d'Eze day, with the final up-and-down of this iconic climb sorting out whatever is left to be settled.

Up to now, three teams have been more visible than the rest: FDJ, towing Nacer Bouhanni around, plus Sky and Astana, who have made their overall ambitions clear in the last 30 minutes every day. For their efforts, FDJ have two contenders, Sky have the lead, and Astana the best man for the job... in theory.

FDJ, racing at home, bagged stage 1 via Bouhanni, and proceeded to defend the jersey for two more days, despite Bouhanni showing no further inclination to win. On Monday he trailed Degenkolb while, luckily enough, Moreno Hofland punked the stage. By Tuesday he was outside the top five and yielding to Degs. Yesterday he finished in the gruppetto. No matter; with Arthur Vichot and Arnold Jeannesson lurking 19 seconds back, all that pulling hasn't cost them a shot at a huge home result.

Sky, meanwhile, seem a little too happy about their face-saving grab of yellow from yesterday. Their last-minute transfer of Richie Porte to Tirreno-Adriatico, with the excuse that they needed to cover for a sore Chris Froome, is one of the big stories of the race, a complete fuck-you to the venerable French circuit. In fairness, Tirreno features two more time trials than Paris-Nice, making their "it's not you, it's me" excuse seem plausible as regards the crono-acing Porte. But when their leader Geraint Thomas escaped with Tom-Jelte Slagter (why didn't I name my first born Sage-Jelte?) and seized the overall lead in the process yesterday, Sky were all smiles and Thomas was celebrating his "massive" move. With the yellow target on his back, he won't be celebrating for long.

Astana, meanwhile, seem to move up and protect Vincenzo Nibali smartly every day. It's nice to have singular goals, plus the firepower to accomplish them. The Sons of Vino brought their A-team to France, not Italy, and it's nice to see them work on protecting their biggest asset. The problem is, I'm not sure Nibali himself has the form to finish the job. With three downhill finishes the Shark should be smelling blood in the water. Properly trained, he could win that Col d'Eze stage nine times out of ten. But there's nothing in his current palmares that says he's anywhere close to peak form.

So Who Got This?

If this does evolve into a climbers' race, the name of Betancur jumps off the page. Fifth in the Giro d'Italia last season, Betancur's climbing is inarguable. Toss in a win two weeks ago at the Haut Var (over the likes of Evans and Gautier) and you've got some indication of form. The team's motivations are through the roof, though how much protective firepower they can bring is another matter. Sky and Astana, with deep lineups and multiple contenders, would do well to isolate the young Colombian and make him play defense, rather than allow him to take a shot at winning stage 7 and being able to defend on stage 8. If Betancur can be checked, there's no telling who on that list above will take his place. If nothing else, ASO have a wide-open event on their hands.