A different kind of Primavera

First it was this one thing, then they decided to make it into another thing but then all this stuff happened and it turns out it's going to be this whole other third thing that no one saw coming . And that in short is why we finally might get to see Mark Cavendish and André Greipel duke it out for the win in Milano-Sanremo on Sunday. Stick with me for the long version.

Share All sharing options for: A different kind of Primavera

Soapopera seems to be the theme for RCS Sport, the organizers of the Giro, Milano-Sanremo and most of the other major Italian races, this year. First we had the odd and not yet resolved case of alleged embezzlement that lead to the firing of director Michele Aquarone and after christmas we had the will it be/ won't it be -saga of the Milano-Sanremo route. Much noise was made last year as RCS announced the latest in a long line of course-changes throughout the race's history. Like before this was done to make the race harder to keep up with the evolution of the ever-improving pro peloton. Worried that the race would fall too easily to the sprinters and that the finale wouldn't produce enough excitement until the final few hundred meters a new steep climb, the Pompeiana, was included in the course betwen the classic Cipressa and Poggio climbs and the Le Manie climb that has served as the sprinter-killer since 2008 was excluded.This was how the course was supposed to have looked. 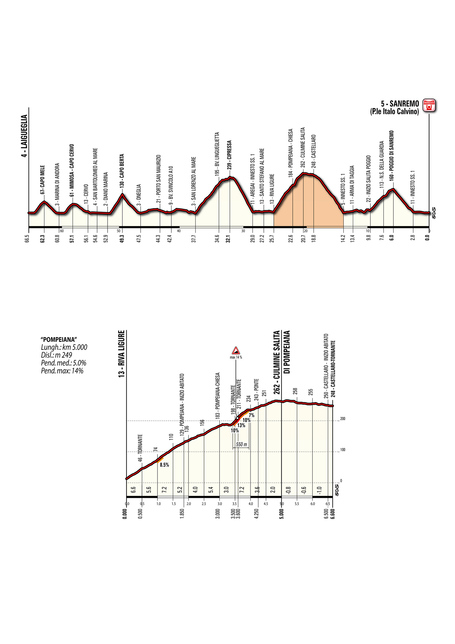 The Pompeiana differed from Le Manie in that it had such steep sections that it would prove an almost impossible hindrance to the sprinters. Add to that the fact that the three climbs in succession would offer almost zero chance for recuperation and for establishing an organized chase of the attacker and the course almost guaranteed a solo win or a very select group sprint. Climbers and puncheurs rejoiced while cranky sprinters bawled in the press about their toys being taken away from them. It was all good drama for us polemica-addicts. And then it all fell apart...

Act II of the melodrama was when weather and winter ruined the roads of the Pompeiana and RCS were forced to a late change back to a course that is not only without Pompeiana but also without Le Manie. Enter the sprinters again. You'd think they'd be pleased but instead they mostly seemed grumpy that they were given such short notice. One would think the sudden possibility of winning a monument would bring them more joy but that's bikeriders for you. If they aren't complaining then most likely they're dead.

Which brings us to the now. What do we have? We have a course that looks like this

Basically it's the good old pre-2008 course which gives the sprinters an excellent chance to win. Don't get me wrong, they still have to contain the attacks on the Cipressa and hang on for dear life on the Poggio to have the chance to win by pulling off a hair-raising chase down the Poggio-descent and fight like crazy to make it a big sprint in the end. It's not a silver platter kind of deal by any means but at least its a decent enough chance.

What kind of race are we in for?

Basically: Peter Sagan vs. The World. It was going to be like this on the "old" course and it's going to be like this now. Everyone who saw Sagan after last year's narrow defeat knows it. You can bring all the Cavendishes, Cancellaras, Greipels and Gilberts you want, this race is Sagan's to lose. Yes things got tougher when the course pancaked out but the basic premise is the same and Sagan can win on pretty much any variation of this course. What will make things interesting is if we really do get a battle royale between the sprint-kings, Cav, Greipel and Sagan. I mean if it's going to be a sprinters classic then having the absolute bigs settle it between them would be ideal. It seems unlikely to me given Cav's form though. Either he's bluffing better than ever or he honestly hasn't had time to find the climbing legs that will be needed to put him in contention. As for Greipel, climbing legs shouldn't be the problem but I still find it hard to see him win the race if Sagan is with him to the sprint. Greipel does best when he has a few teammates setting him up and that isn't super likely to happen unless Lotto have a truly magical Sunday.

Beyond the three bigs the major name mentioned seems to be Degenkolb. Giant-Shimano obviously have enough faith in him that they resisted temptation to throw Kittel in on short notice too. I have to say that Degenkolb's inability to make a mark in the big classics so far is the one big questionmark that remains about him. His record is impressive beyond that but when he emerged we thought for sure he would be a guy for monuments, not minor races. He has come up just short until now and he's another one I have a hard time seeing just how his path to victory looks? If he gets over Poggio with the front I have a hard time seeing that a few faster guys manage the same, but who knows.

In fact there is a whole group of second string sprinters who look really good coming into the race and who could all benefit from killing off Cav and Greipel. Kristoff, Demáre , Boasson Hagen, Goss (edit: not riding) and Hushovd are all guys with better climbing than the two bigs but still basically bunch sprinters. But once again we come back to the major crux, do we see any of them beating Peter Sagan? If so , how? Somehow the "long"-range attackers look more likely to shake off the yoke of Sagan in this race. No matter how hot Sagan is, he and Moser (edit: Moser out with knee problem) will struggle to contain every attack from the Cipressa and onwards if people go about it aggressively. BMC are most likely putting all their energy into this with Gilbert, who has MSR as a major season-target, and Greg van Avermaet. Both of those are riders that Cannondale can't let get away and they're not the only ones. Gerrans and Kwiakowski ar similar types with similar status from Cannondale's point of view.......and then there's Cancellara who deserves his own category in the list of favorites. A year or two ago he would be the supreme five star favorite but at this point he is (deceptively) just one of many but you can bet that he doesn't care one way or the other if the route is changed. If he is on form he makes his own course and it is up to the others to try and respond to whatever he throws at them.

The beauty of this edition is that people will be itching to go from the bottom of the Cipressa. The race has to be made hard there or too many riders will be put out of contention. Surely people will be looking for ways to pre-empt Cannondale and also make 100% sure that Cav & the Gorilla go home in tears. Too many people come here with serious ambitions and teams aren't stupid. They've done pre-2008 editions most of them and have a good understanding of how much of an effort it takes to rip this out of the hands of the sprinters. One can only hope they have enough offensive courage to try and avoid the predictable ending. Teams with longshot riders should probably try and make the selection already here. Garmin's on-form Tom Jelte Slagter along with his old Belkin chums could be a good bet. Belkin have basically pretended that the course is still the climby one and have kept captains like Mollema and Nordhaug without hedging their bets with a sprinter or two. Most likely due to the fact that they don't have any sprinters that can make this finale but still (yes, I know they have Martens but let's face it, that ship has sailed). So basically if they want it, Belkin have try to win this race the hard way. Another one who should perhaps go long is Sylvain Chavanel ? Anonymous so far this season this could be his time to make his presence known and he isn't really explosive enough to make all the difference on the Poggio. Getting in the right selection already from the Cipressa though he could totally pull off and we know he isn't afraid to commit himself early like too many riders are. 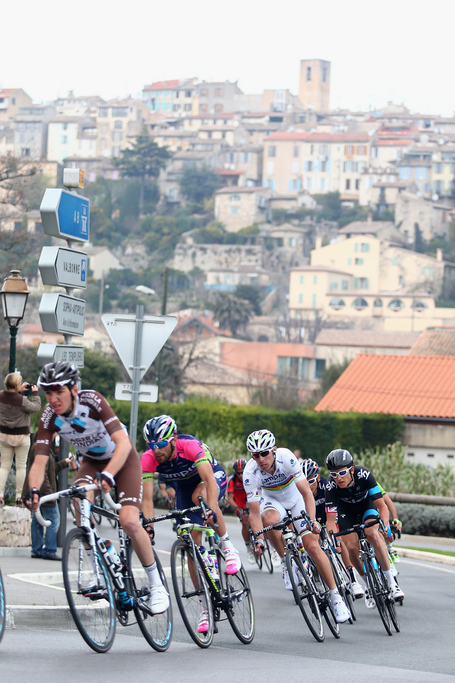 Lampre-Merida is another team with intriguing options, they can basically play on all outcomes. A likely gameplan could be to plan for launching Ulissi on the Cipressa, Costa on the Poggio(edit: Costa not riding)  if that fails and then have Sacha Modolo as the last option should it come to a sprint. Modolo made his name in Sanremo four years ago and has never really lived up to that promise since then but the pre-season shows that could very well be about to change.

In the end though I can only come to one conclusion: this is going to be an full-on, massive, unavoidable Sagan-fest. Odds are he and Moser close down whatever aggression we see and the Slovak makes the decisive selection. Barring that, he's picked up enough insights the last two years to make sure he doesn't make any mistakes should it come down to a sprint. It's a dull prediction but in the end Sagan can only go so long before he finally wins one of the really big ones. I won't really be the one putting my money against it happening here even when I know the hectic, unpredictable nature of Milano-Sanremo. But even if Sagan does emerge victorious I'm excited to see how the race will play out. So much has been made of the course changes that we seem to have lost sight of the fact that MSR is often the one race where the saying "the riders make the race" holds most true. And with soapopera being the theme there are so many differing agendas and so much uncertainty so it's bound to be a cracking edition.