Time to kick off the Ronde Warmup season. I know I've kicked that off at least two other times already, using the concept rather loosely. But now, finally, is a race that everyone agrees is a Ronde warmup. It's the Straight Across Flanders race! Now, with occasionally straight roads, though not really.

Every few years the organizers of most Flemish classics have to stop turning up the climbs and cobbles and backpedal a bit, if for no other reason then because next year they can start turning them up again. And so it has come to pass that the 2014 Dwars door Vlaanderen has one less climb than its predecessor. In place of the Steenbekdries, you get the slightly tougher Taaienberg this time around, with the Knokteberg subtracted to lessen the pain and straighten out the course. This is "Straight Across Flanders," right? Amirite? 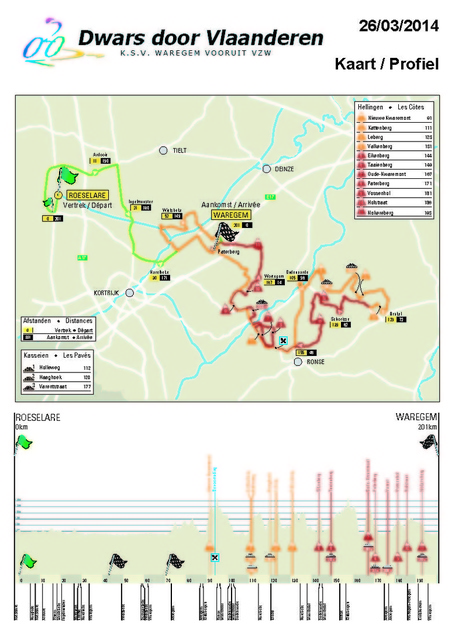 sigh... [And sorry about the quality. Go here for a nicer one.]

The remaining juicy bits are all identical, including the run-in to the finish via the Vossenhol-Holstraat-Nokereberg trio and the Oude Kwaremont-Paterberg duo where you're likely to see some advanced skirmishing. Number of cobbled stretches remain the same as well, with the Holleweg-Haaghoek duo eliminating the poseurs just after the mid-point and the brutal Varentstraat awaiting whoever survives the Paterberg with their hopes intact.

The attention paid to Dwars door Vlaanderen has expanded a bit in recent years, transforming from what was viewed as a small warmup to one more attuned to the whole pre-Flanders cycle. The race itself has always been there, however, and its honor roll starts with Rik Van Steenbergen in 1945 and continues from there. Enough said. It's always been a mid-week special, and was actually a two-day stage race from its inception until 1964 (excepting 1947).

Dwars features climbs closer to the finish than any of the other warmup classics, which is significant given the current makeup of the Tour of Flanders. It's a mere 8km from the Nokereberg to the line, compared to (now) the 14km dash from the Paterberg to glory in de Ronde... over some of the identical roads, albeit in reverse direction. The final climb of E3 is 14km away, matching de Ronde, but in the past the last E3 climb was further away and the Paterberg was a mere 7km from Oudenaarde. Anyway, for good or ill, Dwars is a bit punchier than the other semi-classics.

That said, it's not as selective as E3, with its seven additional climbs, is likely to be. Last year ended with Oscar Gatto taking a small-group sprint. With that in mind, it's fair to say that any sort of finale is possible: bigger groups, more spread out, etc. Weather in Greater Waregem looks pleasant enough, if chilly. Here's last year's finale.

I'm going to take a guess that, in dry conditions, the final climb up the cobbled Nokereberg produces a winner. Yes, you could see complete demolition on the Oude Kwaremont (km 167 of 200), or the Paterberg (km 171), but with no major winds or rain the regrouping possibilities are clear. That leaves the Varentstraat cobbles or any of the final trio of climbs, with only the Nokereberg featuring cobbles. So let's go with that, or a bunch sprint.

Barack Obama. Apparently the President is going to be in Waregem for the finish, and there were some early rumors of him suiting up for Garmin. Ultimately, however, I think the security issues over a 200km course will prove insurmountable, and the race will just have to deal with his motorcade instead. Welcome to life in DC, where nobody's schedule is safe from a presidential motorcade delay.

Beyond De Prez, the name of most interest is Alejandro Valverde of Movistar. OK, and OPQS talisman Tom Boonen too, but that's less of a surprise. Valverde has added some cobbles to his diet this year, in preparation for the Tour de France, and this will be his first appearance on a semi-classic... making this that rarest of moments, a race featuring Valverde that nobody thinks he can win. Except maybe not. For starters, I think he can win, if the other teams aren't careful. Look for OPQS to take note and make sure Valverde's trip across the Varentstraat cobbles is a notably unpleasant one.

OPQS should take care of business. There's nobody else on the startlist who can match Boonen, for legacy or team support (Terpstra, Steegmans and Vandenbergh are this week's Praetorian Guard), unless it comes to a sprint. Then it's presumably Boonen against the likes of Garmin's Tyler Farrar (third here in 2011), Matt Goss or Jens Keukeleire of Orica, newly minted monument winner Alexander Kristoff of Katusha, early-season star Moreno Hofland of Belkin, and defending champ Oscar Gatto of Cannondale. Plenty of the other usual suspects are around for the non-sprint or reduced-sprint action, including former winners Terpstra, Nick Nuyens, and Sylvain Chavanel. Missing are some of the big names of spring, notably Fabian Cancellara and Peter Sagan, as well as Nico Eeckhout, who probably rode this race more times than Sagan has celebrated his birthday. Hopefully the recently retired Belgian Champion and native of nearby Izegem can drop the flag at the start or something. It won't be the same without Rambo.

Boonen. Too much support, not enough competition.