The French Side Show: Critérium International

The Volta a Catalunya has the major Tour de France contenders busy this weekend and who can forget this Sunday is the Ghent Wevelgem? But in the middle, the Critérium International is about to kick off with its fifth trip around Corsica.

Share All sharing options for: The French Side Show: Critérium International

Races with split stages remind me of amateur races, and that is no slight. I remember countless weekend omniums that tossed a time trial and road race in the same day, all because working stiffs can't make it over to a race on Friday evening with enough reliability to make it a three day weekend. Those were pretty rough days, trying to race a road race with a time trial merely hours old in your legs or, worse, trying to do a time trial after playing the breakaway game in the road race.

Every now and then we see the pros do the same thing, though split stages are really a harkening back to the 1980s when even the Tour de France helped popularize them. Now, few examples remain and Critérium International is one of those distinctive races. It's short and lively and were it earlier on the calendar, it would be a spectacular show that might bring in some bigger names in the sport. Last year Chris Froome won and Richie Porte, Cadel Evans, and Tejay van Garderen were along to play. But this year, the start list is looking a little more ragged.

Stage 3 finishes on a real climb, not a more moderate climb of the sort Pierre Fedrigo used to be able to smash up when he was less anonymous. The Col de l'Ospedale is 14 kilometers long and rises at an average gradient of 6.2%. Not too terribly bad, but the penultimate kilometer kicks up at a mean 10.4%. That's some bite and should provide the springboard for the stage winner to make a final selection.

Not much. This is the fifth year the Critérium International is visiting Corsica and without a lot of island to play with, the course is largely the same, especially the summit finish on the 14 kilometer long Col de l'Ospedale on Sunday. That doesn't mean it's not a fun course, though.

A few things, actually. At only two days long, this is plenty short to prompt some very aggressive racing because there is little riders need to save their reserves for. Stage 1 is a rolling but sprinty-looking one, but the last kilometer climbs at an average of 3% and gets a little steeper than that in the final 500m, so it's not an easy sprint by far. It's one for the more robust guys. And, fun fact? The TT stage later in the day finishes at the same place, so riders will get plenty of time to get acquainted with Port-Vecchio. And after a short stage, the climb up the lOstpedale isn't so hard to rule out the more all-round types.

Where Will The Race Be Won?

Stage 3, on Sunday. The first day's sprinty stage plus a minimalist 7km individual time trial means time gaps will be minimal. But the next day, the hills come a calling. Pierrick Fedrigo and Chris Froome have both won the race atop the l'Ospedale in years past. 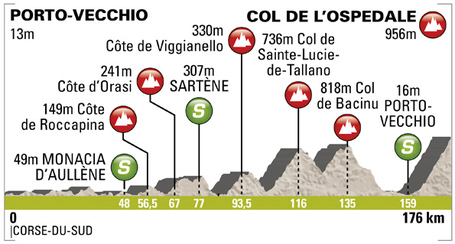 Who Do I Need To Know?

With a short TT, a weak startlist, and a mountaintop finish, this could be when one of the Schlecks finally starts winning things again! Not really, though. Though overlapping with the Volta a Catalunya keeps most of the bigger stage racing and Ardennes guys away, Frank and Andy will have to get past Garmin-Sharp's Rohan Dennis and a strong looking Jean-Christophe Péraud to win. My money is on the latter, personally. Throw in a lot of French guys and you've got your peleton.  Vincenzo Nibali was supposed to race here, but he has decided that a stint in Tenerife would do his Ardennes and Tour de France preparation more good than two days playing in France.