Halfway through the classics... First, let me pay some props to John Degenkolb, winner of yesterday's Gent-Wevelgem. The race itself was nothing special, not warranting a recap. So I didn't do one. Gent-Wevelgem offers us a choice: good weather or good racing. Every year it seems they try to change the calculus and defeat or at least dent the inevitability of a sprint. But the only thing that can take away the sprint is the weather. Today was lovely. So of course we got this: 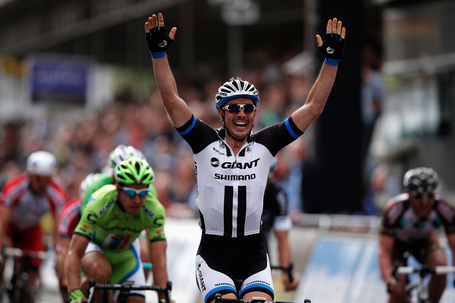 Great win in the end for Degenkolb, who has seemed on the verge of a big one-day victory for a while. He didn't make the B List for nothing. And bummer for several others, victims of the many crashes on the day including worst of all, Andre Greipel. Contrary to reports, Greipel did not break his collarbone -- he damaged ligaments in his shoulder. That's worse. I don't know why I haven't been a bigger Greipel fan, because he's a likeable guy and a great sprinter. Also, he does significant work in the peloton for his teammates when it's not his day. Total cyclist. The coming days and weeks would be better with him around.

Tyler Farrar got away with some cuts and bruises. Geraint Thomas too. Ian Stannard, who tumbled into a ditch earlier on, spent the night in a hospital after cracking a vertebrae. Unfortunately, these will be the lasting images of this edition of Gent-Wevelgem.

OK, with three races in the books, let's see how the bigger teams are shaping up. Might as well start at the top...

It's been an odd run so far for the sport's most powerful Classics outfit, taking one win and a second in three days of racing. That's good, right? Eh... not to a team which defines "winter" as the period from the end of Brabantse Pijl til the start of Milano-Sanremo. And not when neither of those results includes Tom Boonen.

Belgium's mooiste got caught behind some traffic in E3 Prijs and wasn't on hand for the winning split. Two of his teammates were, and one of them -- Niki Terpstra -- seemed like a good bet to do something. Two days prior he had put the wood to the entire peloton at Dwars door Vlaanderen, and on this day he and his teammate had only to put the wood to one rider to have a clear shot at the win. Unfortunately that one rider, Peter Sagan, was able to do what dozens of others could not two days ealier -- track down Terpstra. Even while having to cover attacks by Stijn Vandenbergh, Sagan (and Geraint Thomas) reeled in Terpstra to set up the sprint whose outcome was pre-ordained.

Boonen, meanwhile, had injured a thumb, and didn't appear to be sharp following a sad week in which his partner Lore lost a pregnancy. Hopefully happier days are ahead for the couple, though the well-wishes for Boonen the competitor stop at the door of the Quick Step team bus. If Tommeke, fifth yesterday, gets cranking, this team will be hard to beat. Terpstra is as strong as any Lefevre lieutenant has ever been. Hint hint.

Trajectory: Downward, but with a decent chance of spiking back up.

Sagan isn't the only guy in the picture, but whatever you think of his team support, it's hard to argue that it matters. He obviously handled business himself on Friday, and even with a powerful leadout Sunday (which doesn't happen often in Wevelgem) I doubt he beats Degenkolb most times. The important part, though, is simply that Sagan is Sagan, a terrifying all-rounder with no real weaknesses in his game. Up til then his season was a conspicuous disappointment, with him not winning either the Strade Bianche or Milano-Sanremo. I'm being a bit cheeky here; expecting anyone to win everything is silly. But it does speak to his attention to the classics that his form appears to have just hit his peak. He's all business, and by that I don't mean the Tour of Oman.

Sticking with the winning teams here. Degs was a candidate to get one, and now that's happened. Dries Devenyns is pretty much the only other guy to worry about for other teams, apart from Kittel in the Scheldeprijs. The kids (Janse van Rensberg and Sinkeldam) aren't quite ready yet. Which means Degs has to get into some small field sprints if he's to win a second classic.

Continuing to be all buck and little bang, BMC's best finish so far is Thor Hushovd's ninth yesterday. Not for lack of effort; Van Avermaet tried something on the Kemmelberg, and Sylvan Dillier looks like a future revelation. Back in the present, however, it's hard to see them winning anything. And by that, I'm not merely handicapping, I'm wondering how it's even possible? Obviously Phinney isn't a threat anywhere outside Paris-Roubaix, and if he gets on the track with the leaders, well, Phinney knows what to do on a track. But that scenario is a dream, not a likelihood. He's young. After that, Van Avermaet on a solo attack up the Paterberg? Oss hanging around for a sprint? Thor turning back the clock? None of this sounds better than "theoretically possible".

Trajectory: Down. Or staying there.

I haven't seen a replay but it's been suggested that Farrar was responsible for the pileup at the end of GW. Which would only be relevant to my level of sympathy, and only just, since things happen. But I don't want to be accused of overlooking this.

Up til then, and possibly yet to come, Farrar's emergence has meant a lot to this squad of lottery tickets. Langeveld is their only true consistent factor, and even he has been absent from the late stages. Nuyens is a total mystery and can't be counted on for anything. Van Summeren is only a threat in France. Apart from David Millar's Farewell Footwear Tour, Farrar (with an assist from Jack Bauer) are about all they've had going. And even that depends on how Farrar feels post-crash. But if he's OK, well, the longer Farrar hangs around, the more dangerous he becomes, and the more his presence gives Garmin options.

<>Trajectory: Was upward, now on hold.

You know who else looks like he could Devolder his team captain? Stijn Devolder. Of course, that would only happen if Cancellara himself doesn't track him down (and kill him). Would LOOOOOVE to see Devolder and Terpstra up the road in a break, approaching the Oude Kwaremont. That would get mighty interesting. Thanks to the Dash-Cams now all the rage in team cars, we might even see a few DSs cry. Cancellara doesn't seem otherworldly, but there's still time.

Trajectory: Up, although it's been unusually quiet.

The loss of Andre Greipel was shocking and sad, and the only consolation is knowing that the Tour is still three months away, so maybe his year won't be a total loss. Without their sprinter, Lotto are back where they started, hunting around for a longshot chance. Gallopin is coming on and Roelandts is one of those guys who's always close to the front, but I doubt Quick Step fear either of them.

Trajectory: Down, way down.

His Sep-ness is exactly what you want in a classics leader. Attentive, aggressive, consistent, unafraid. Nice sprint on him too, all things considered. Whatever they just re-upped him with, it wasn't enough. Lars Boom is back, in body at least, and after that it's the same group of useful veterans (Tjallingii, Tankink, Wynants) who are usually in charge of salvaging respectability when Sep isn't around. Vanmarcke hasn't garnered much attention with Sagan, Boonen, Cancellara etc. around, but at this point nobody is sleeping on him either.

Thomas should have his best chance at Flanders glory this weekend, following his surprising surge in 2011, followed by a DNS and last year's decent but not overly notable return. This version is a bit more aggressive, and very, very strong. Sadly, he's lost one of his best lieutenants in Stannard, but Sky are loaded with other strong, veteran helpers like Boasson Hagen and Eisel. Probably still good enough to survive the loss of Stannard.

Trajectory: Upward, in a weird way.

Turgot and Gaudin have taken turns being aggressive but in reality they've been nowhere in the end. Only Yahueni Hutarovich is rescuing them from being completely shut out... but then again, sprint finishes in classics are like that. Which is my way of pleading ignorance as to what comes next. The heat is about to get turned up, but their past two years can't be overlooked either.

Best of the Rest

Matt Goss can't keep getting flat tires at the worst time, can he? Actually, yes, in Flanders he can. Astana's Borut Bozic has to be moved into one of the favorites slots for the Scheldeprijs. No idea at this point what Pippo Pozzato has in the tank for Lampre. He hasn't tipped his hand yet, assuming he has one. Is Alexander Kristoff tired? MSR will do that to a brother. Sylvain Chavanel is almost certainly laying low for IAM, and some of us shall not be fooled for a moment. Arnaud Demare moves up next to or possibly past Bozic for Scheldeprijs chances and could make a splash at Driedaagse De Panne starting tomorrow (or more likely later). Tom Van Asbroeck is earning himself a nice next contract this month.