Belgium had it's big opening weekend last week and now it's time for the spring to arrive in Italy. True their season has already kicked off with the traditional Laigueglia but the combo of Strade Bianche and Roma Maxima this weekend really feels as the first true test. And what a beautiful set of races we have to look forward to.

With every year, with every edition the Strade Bianche grows towards classics status. Now in it's eighth year the RCS has lengthened the race to 200 km. Roughly 45 of them are on the iconic white gravel roads that have become the trademark of this race along with the fabulous hilly Tuscan scenery that the race winds it's way through on the road to Siena. The weekend forecast is for sunny and warm so conditions should be ideal. One can't help but wonder though what a wet and windy edition would look like, it would pose an unique challenge t the peloton for sure. As with Roubaix though we seem to be resigned to dream about muddy editions because we can't escape the curse of good weather.

Roma Maxima has just one year under it's belt in it's current form. Best remembered for the mistaken celebrations of Filippo "Pippus" Pozzato, last year actually offered a thrilling race won by an aggressively riding Blel Kadri . It may be too soon to really say what character this race will take but we should have a clearer picture after this second edition. The course is very slightly altered. An additional 15 km with some more climbing has been added in the middle section of the race, just after the Rocca Massima climb. It shouldn't make a huge difference but it will certainly feel in the rider's legs in the finale if nothing else. Just like Kuurne last weekend Roma Maxima will largely be dependent on the riders to make the race.

The startlists for both races have so far shrouded in a bit of  mystery and Roma Maxima still is. The biggest names of the past editions seem to be returning for Strade Bianche though. Sagan and last years winner Moreno Moser are on the list for Cannondale and they will undoubtedly be the duo to beat. Last year they held the race in a deadly stranglehold that no one had the ability to escape. Had Moser's attack faltered Sagan would have most likely mopped up the win on the final climb to the square in Siena. Cancellara will be back for another try at win number three while Löfkvist, Iglinskiy and Kolobnev will get you better odds should they be able to get their second wins.

Saxo bring the strong duo of Bennati and Kreuziger and they should be animators on this course, Benna at least has been impressive in almost every edition he has taken part in . Most intriguing roster of the day probably goes to Omega Pharma who for reasons beyond understanding have decided that sending Mark Cavendish might be a good idea. Is there a world renowned gelato-truck somewhere on the road to Siena that I'm not aware of? Other than that I'm drawing a blank. On the other hand they're also sending the man of the hour, Kwiatkowski and that could be a very interesting experience. He's never done the race before and this is presumably step one in a slightly different calendar that will see him aimed more at the hillier races whereas his spring campaigns have been on the cobbles in previous years. The final climb might not be his cup of tea but he could wreak havoc on the course before that. If Cancellara wants a playmate in the early attacks Kwiat could be it, the two could throw some serious wrenches in the Cannondale machinery if all goes well.

In the old farts category we have Cadel and Valverde who both could be factors and Cunego and Pellizotti who probably won't. The kids are more interesting. Climbers Aru and Barguil should be too puny for this race but guys like Dumoulin and Amador should be interesting to watch. And then there's Uran Uran Uran and everybody's new darling Diego Ulissi. Those guys could actually win the whole shebang. 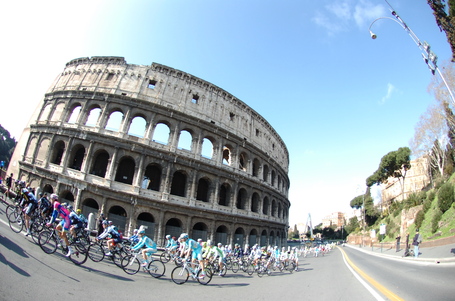 The Roma Maxima passes by the Colosseum in 2013. Photo: Sirotti

The startlists for Roma Maxima are a little erratic, perhaps because the course is new and teams aren't 100% on which types of riders stand the best chance of winning? For the most parts teams go with the same core of teams for both races, in many cases the exact same squads. There are some oddities though as some teams clearly sent their better climbers to Roma whereas a team like BMC  send Evans to SB while former winner Gilbert goes to Roma. Or is that more a case of staying well clear of the path of Sagan for the purposes of self-preservation? Anyways people clearly have different views on how this race may play out as we have guys like Quintana and Anton here for Movistar while Lampre sub out Ulissi from Strade to make room for Modolo in Roma Maxima and that just doesn't seem to add up. On the positive side it's not a bad sign for the versatility of a race that some teams send sprinters and others climbers, it at least hints at the idea that this is a race that can develop in many different directions. Time will tell what kind of race we have with Roma Maxima,