Is there anything more played out now than pictures of riders warming up on the course of one of the major classics? It seems like not long ago when only the local medium could be counted on to cover riders on their day off (sorta), and now it's gotten completely out of hand. Here are some examples.

Here's BMC out training in the pre-Arenberg Wallers secteur, one I remember well. Note the dust. 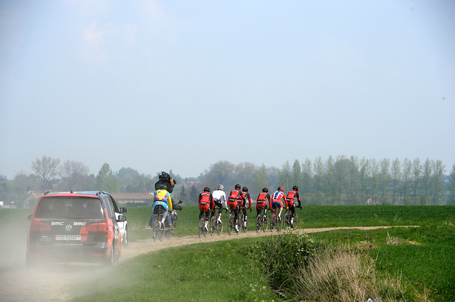 Here are the top OPQS guys. Note, the photo does not display any real perspective on distance; the third rider is just a lot smaller than Boonen and Terpstra. 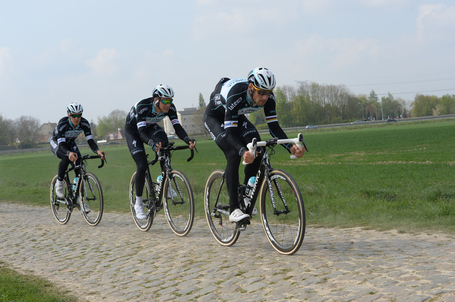 I love this one. Cannondale are riding together, well behind Peter Sagan. This training is highly specialized to resemble Sunday's reality. I am told that their DS was shouting at them during this exercise through race radio to "bridge up or ride back to the hotel." Note the presence of photographers in this photograph. It's like that now. 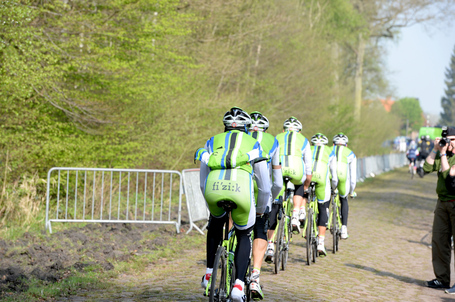 Here are two riders, Manuel Quinziato and Michael Schar, being followed by the media through the Forest of Arenberg. Two riders who are unlikely to get a result, and yet they are being filmed live, and I think being broadcast over Swiss television. Why is this all necessary? 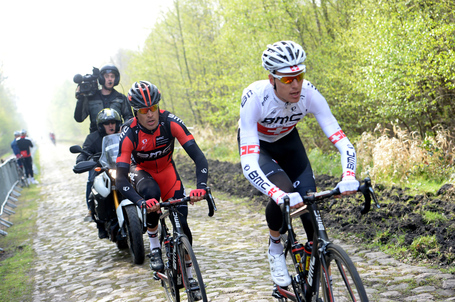 [Actually, Schar is on my list of sneaky picks to do something, which as of hitting "publish" is no longer very sneaky.]

On another topic, the other day I had the chance to be reminded that I hadn't picked Fabian Cancellara to win the Tour of Flanders. This was in the midst of an article where I wasn't picking him to win Paris-Roubaix, furthering a career of forecasting that the Swiss Bear will never amount to anything. Which made me think, why do I keep doing this? [Picking against the obvious favorite, not picking at all or blogging or getting out of bed in the morning. Those questions remain unanswered.]

Cancellara, by all accounts, is like the star quarterback with the beautiful girlfriend who volunteers with sick kids... but in reality isn't secretly an asshole at all; he's nice, funny, patient, generous, etc. And you root against him even more. No matter how many positive attributes he displays, you are unmoved to support him. Meaning the problem isn't him, it's you. Mathematically speaking, Cancellara is the positive numerator and I am the negative denominator, and any combination thereof will result in a negative outcome.

So what exactly is my problem? I don't think I loathe myself; if anything, I probably don't hate myself as much as I should. Do I resent the Man? Most people would say I work for the Man, and rather happily I might add. Maybe it's an ethnic thing, but even that's mostly stupid -- he's more Italian than I am. At least he can speak the language, even if his gnocchi probably can't touch mine.

I guess I just like saying something that hasn't been said before, and "Cancellara will win" has been said about as often during the last several Classics seasons as "beer tastes good" and "Jens is going to get crushed during tomorrow's Paris-Roubaix sportif".

Wait, what? First off, this is the same Jens who made it up the Koppenberg OK, and who constantly says he' hasn't reached his ideal racing weight, but there's a history of big Swedes succeeding in northern France. I think he's been sandbagging this entire time. Therefore, the new "over/under on Jens getting into the sag wagon" is "Mons-en-Pevele," not "Arenberg Trench."

Anyway, back to Cancellara, I think he probably will win, which is why my pick now is... Sep Vanmarcke. Dammit! This thing is bigger than I am...

OK, let's hear from you. To the polls!