Jumping out of Belgium for a quick jaunt over all of the hills in the Netherlands, Sunday's Amstel Gold Race is the "official" start to the Ardennes races after the transitionary Brabantse Pijl. Time to crack open an Amstel and be glad you're not the one climbing all those steep, narrow climbs.

Share All sharing options for: Amstel Gold Race: Time for the Cauberg

I love this race. It's ludacrious, really, with its numerous over-abundance of short, steep climbs. Between scenes of windmills and a multicolored peloton thrashing up a narrow rise like salmon frenetically swimming upstream, Amstel Gold is one of the prettiest races of the spring. It's pretty punishing to boot.

This is a fairly well-settled course each year, starting in Maastrict and drunkenly stumbling towards Valkenburg via four loops of decreasing length. The Limburg province is distinct from the neighboring Belgian Ardennes, but it has plenty of short, steep climbs. Most are 700-1600m long and almost every single one hits double digit percentages in the middle. Oh, and there are 34 of them over the span of 251 kilometers. The climbs only get closer and closer together as the race goes on with a wince-inducing 8 climbs in the last 42 kilometers. Yeow. The finish was changed starting with the 2013 edition, but more on that below. 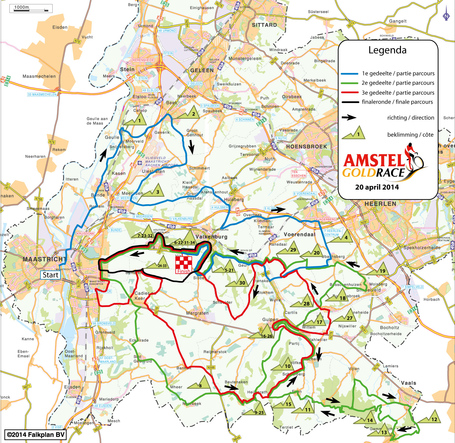 The only major race sponsored by a beer is in the Netherlands, not Belgium. And Amstel totally has the repeating circuit thing figured out with racers climbing through a sea of drunken fans on the fabled Cauberg climb in Valkenburg four times over the course of the day. Oh, you wanted actual race stuff? Well, plenty of that is interesting too, especially the finish.

In the olden days, the race would finish in the middle of Maastrict and usually ended in a tactical small group sprint amongst protagonists. That was the version of the race that Eric Zabel won in 2000. Starting in 2003 the race finished atop one of the race's signature climbs, the Cauberg in the middle of Valkenburg. The uphill sprint on the milder gradients at the top of the climb - after a 12% bout in the middle - is where Philippe Gilbert began making his name as a monster.

The Cauberg finish made the race a little too predictable, though, and as time wore on it seemed to dampen aggression as the favorites waited for one timely surge towards the finish line. So, the organizers moved the line beyond the Cauberg by some 1800 meters. The 2012 World Championships - won by Gilbert - were our first glance of the course. Riders can solo free, like Gilbert did when he won his rainbow stripes, but holding off a charging peloton is hard. A small group stands a good chance, but looking at each other is bound to kill their chances. That is what happened last year with the group racing for second behind Roman Kreuziger. Gilbert attacked, pried free Simon Gerrans and Alejandro Valverde, and then the three futzed just enough to get caught on the line by the reduced bunch sprint.

The finish is well balanced and has just enough tension between the odds of a solo rider or group of riders and a sprint to make it really exciting. That is, if someone isn't up the road from an earlier breakaway like Roman Kreuziger was last year. Don't rule that out, because even in the early days of the Cauberg finish it was often a smaller group contesting the finish.

The 500m after the top of the Cauberg. If a small group gets free, this is where cooperation will be most important, or where an organized peloton will snuff out anyone's chances.

The course tweaks over the past decade have added climbs and made them come closer together in the final hour, hoping to prod a peloton into more aggressive riding, and that's still possible. The constant climbs prompt aggression, and breakaways certainly aren't hurt by the plethora of road furniture along the route. Last year, Roman Kreuziger attacked over the top of the penultimate ascent of the Cauberg to bridge to a breakaway including Lars Peter Nordhaug, Andriy Grivko, Pieter Weening, Giampolo Caruso, Marco Marcato, and Mikel Astarloza, the last survivor of the day-long breakaway. Kreuziger hit out from the group with under 5km to go and held off the peloton, but much of that can be attributed to teams playing chicken in the final 10km, waiting for Peter Sagan's ragged Cannondale team to do the work to bring back the break. But really, it's still all about the Cauberg, all the time.

The three ways this race can play out, even if everything is together over the final ascent of the Cauberg, mean a host of riders can win. The biggest names are 2x former winner (3x if you count 2012 Worlds) Philippe Gilbert, former winner EnricoGasporato, Michael Matthews, Simon Gerrans, Alejandro Valverde, Michal Kwiatkowski, Tony Gallopin, Diego Ullisi, Tom Jelle Slagter,  and Nathan Haas, and that's just the ones with good sprints. Phew. If you want to see aggressive riding, Dan Martin, Jurgen Van Den Broeck, Rui Costa, Roman Kreuziger, Bauke Mollema, Joaquím Rodriguez, Daniel Moreno, Carlos Betancur, and Tom Duomolin will be among the names to watch for.

Michal Kwiatkowski. The Omega Pharma - Quickstep rider has a fearsome sprint (he was in the top 5 of bunch kicks on stages 2, 3, and 7 of last year's Tour de France) and you won't be dropping him on the hills. Tactically astute, too.