La Flèche Wallone: Lots of change, but the same Mur

A host of changes are on tap for Flèche Wallone this year, but the racing should stay the same as it ever is.

Share All sharing options for: La Flèche Wallone: Lots of change, but the same Mur

At only 199km, La Flèche Wallone is the baby of the Ardennes races. And with its finish on top the murderously steep Mur de Huy, it is easy to write the race off as one-dimensional, a pot that does not as much as simmer before the final 1.2 kilometer climb to the finish. But the race is hard - the peloton is reduced in half, if not more, by the time it hits the Mur for the final time - and the last kilometer contains a world of nuance.

"The Walloon Arrow" really ought to be named "The Walloon Golf Club" if we want to be true to its shape, but arrows are far cooler so the name lives on. The race starts in Bastogne this year and heads almost perfectly northwest until it nears the town of Huy. From there, it embarks on three loops of descending length through the town and over some of surrounding climbs, always ending atop the Mur de Huy after ascending its famously painted road.

Lots and nothing at the same time. Over the past years, the race has started in Charleroi or Binche, shooting eastward towards Huy before starting the circuits around the town. This year, the start moves substantially, 150 kilometers southeast over to Bastogne. Now, the race runs northwest towards Huy, but once there, the race should feel familiar.

A few years ago the organizers reshuffled the climbs that precede the Mur on the final lap, bringing them closer together and closer to the finish in an attempt to spark more aggressive riding. But the dynamic of the race is the same, year in and year out: wait for the final trip up the Mur. This year the final, short circuit has been brought south of town rather than looping north, but like changes in the past, don't expect it to change the way the race plays out. 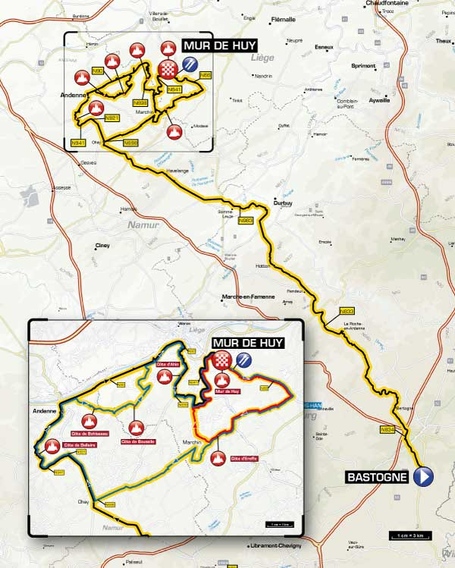 There's a women's race too! I do enjoy Flèche Wallone on its own, but the fact that the women do a World Cup race earlier on the day that goes over the Mur de Huy once before finishing atop it is pretty much the coolest thing on the day. The women's races here are generally more exciting than the mens, with wins coming out of small breakaways not too uncommon, like when Evelyn Stevens won here in 2012. Check out Sarah's interview with Emma Pooley that previews the women's race here. 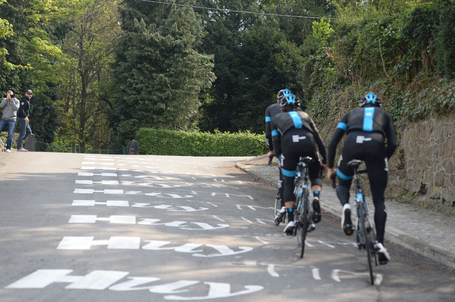 Yep, here. Or, specifically, 150m from the finish, which is a little further up the climb than these Sky boys are. Try as they might, the race organizers are not going to be able to prompt the sort of aggression that will see the race decided before this point. Two years ago, Ryder Hesjedal joined forces with Lars Peter Nordhaug in an audacious move inside the last 15 kilometers. The two cooperated beautifully and the bunch didn't react immediately, though they did keep them on a short leash. The duo hit the final kilometer - just after the base of the Mur - with close to 15 seconds in hand. But, that gap disappeared almost instantly when they got to the first properly steep pitches.

You see, the Mur is steep. Way steep. It's "only" 9.2% average for 1200m, but it ramps to 15% in several places, including 26% in one corner. The effort required to climb it fast is so violent that attempting it with hard riding already in your legs is a recipe for disaster and disappointment. Conventional wisdom says you need at least 20 seconds in hand at the base of the Mur to even have a slim chance to hold off a charging peloton, but I would put that closer to 30 seconds. So, the only riders you will see attacking in the last 20 kilometers are those who stand no chance at winning the final dash up the Mur, good riders like Hesjedal who are still below the caliber of the true power climbers like Gilbert and Rodríguez.

Once the peloton hits the Mur for the final time, it's a battle for position and of nerve. It's only a three minute climb to the top, but the race is much more than a pure comparison of watts per kilogram. Take the example of Carlos Betancur, who pluckily jumped away from the leaders with 700 meters remaining. Really, you should look at the video here. He flew up the steepest ramps of the climb, really flew up them. In fact, he hit the final 150 meters with five seconds in hand. But, then came the explosion. The Mur is deceptive in that way, it's all about the timing. Most winners don't launch their moves until 150 meters to go, which is almost exactly where eventual winner Daniel Moreno hit the after burners.

Look further back in time and we can use Cadel Evans as an example. He won Flèche Wallone in 2010, but only after years of trying. Inevitably, in those pre-2010 years, Evans would start his final surge - if you can call it that, on a climb this steep - too early, petering out in the last 50 meters and ceding the lead to a more patient man. Huy - it's tricky, you guys.

If it weren't for the knee injury he sustained in a crash at Amstel Gold, Joaquim Rodríguez would be the favorite to win here. He's built for these things and is a former winner. Also, Rodríguez is one of the few exceptions to the "don't light your jets til 150 meters to go if you want to win" crowd. He'll be racing, but his knee is suspect, as is his recovery leading into the race. Teammate Daniel Moreno won last year and has been improving all spring, and he'll have good competition from Daniel Martin, Carlos Betancur, Michal Kwiatkowski, Jelle Vanendert, and Simon Gerrans.

Of course, everyone's eyes will be tuned to Philippe Gilbert now that he has won Brabantse PIjl and Amstel Gold, especially after the dominant nature of his win on Sunday. Can he pull off another Ardennes triple (or quadruple, if you count Brabantse Pijl)? This is the race that is hardest for him to win - for all his power, he has a larger frame than most winners here.

Jelle Vanendert. He's seriously talented and finally out of a few years of bad luck. Plus, he knows how to be patient and ride to his own strengths, as he showed in Amstel on Sunday when he rode within himself on the Cauberg and then came flying by the chase group to nab second.