Alejandro Valverde won his second edition of La Flèche Wallone with a superbly timed surge atop the Mur de Huy.

We all knew it was going to happen - the sprint on top the Mur de Huy, that is. The attacks that went before the final kilometer's steep pitches, as well intentioned or executed as they were, were doomed. Katusha, who had former winners Joaquim Rodríguez and Daniel Moreno in tow, did the bulk of the work pulling things back together with some assistance from Orica-GreenEDGE in the final kilometers, quickly snuffing out a late attack by Jérémy Roy and setting up a showdown on the double digit percentages resplendent with white lettering spelling out "Huy" and packed with crowds.

Once the peloton - now reduced to about 50 riders thanks to the quick succession of climbs in the final 100km - hit the bottom of the Mur with 1 kilometer remaining, a number of riders were caught out of position due to a crash near the base of the climb, including Dan Martin and 2011 winner Philippe Gilbert. Others, including Damiano Cunego and Frank Schleck, were much further back, losing all momentum in the pileup. It looked like AG2R were bent on setting up last year's revelation Carlos Betancur as Christophe Riblon attacked early, but as his effort petered out on the steepest slopes it was Bauke Mollema and Michal Kwiatkowski leading the charge with Dan Martin, Alejandro Valverde, and Daniel Moreno lurking close behind.

As the race hit the final few hundred kilometers, the waiting game began. Kwiatkowski made the first move, stretching out the favorites several hundred meters from the line as he powered up the hill in the drops. But the young Polish rider, who finished fifth here last year, had hit out too early and was left visibly floundering as Dan Martin began to come around him. Suddenly, though, Valverde shot up the right side of the road clearly at least one cog further down the cassette than his rivals. He had enough room to sit up inside the last 20 meters to celebrate, and enough momentum to keep from falling over before he crossed the line some three seconds ahead of Martin. Kwiatkowski would finish third just in front of Bauke Mollema.

The win was the second for Valverde, who won way back in 2006. In that year, he went on to win Liége-Bastogne-Liége, and with his form clearly superb - he finished 4th in Amstel Gold last weekend - he will go into Sunday as one of the favorites. Dan Martin impressed as well, upending a relatively anonymous start to the season and proving his form is on track for a strong defense of his 2013 title in Liége. 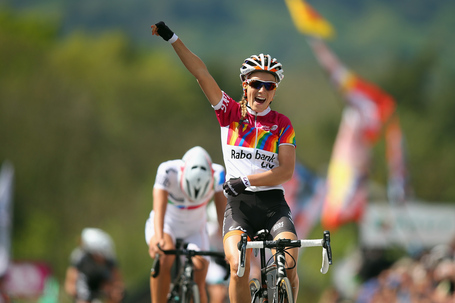 On the women's side, Rabo Liv Women's Pauline Ferrand Prevot out kicked World Cup leader Lizzie Armistead and Elisa Longo Borghini atop the Mur de Huy after 127 kilometers of racing over the same series of climbs in the men's race. The young and talented Prevot got a great deal of assistance in the closing stages of the race from teammate and reigning world champion Marianne Vos, who made her return to road racing today.