The last and greatest of the Ardennes classics arrives on Sunday and makes a return to many of the climbs that have helped define it over the generations.

This is your last chance salon, and the stakes couldn't be higher. Two races into the week of racing through the Belgian Ardennes and the nearby hills in Holland, Sunday offers the last chance for redemption, or confirmation. It's not like the cobbled season, this hilly business. It felt like ages between when Niki Terpstra won Dwars van Vlaanderen and when he rolled onto the Roubaix Velodrome for a solo win. But, to me at least, Amstel feels like yesterday. Over a dozen strong contenders have entered the week and only two have wins, and the biggest win of them all is still up for grabs.

La Doyenne gets a lot of attention for being the oldest of the classics - it was run for the first time in 1892 and two years later the first professional race was run - and it has the stories to go along with that history. There was the time, back in 1957, where both Germain Derijcke and Frans Scoubben won the race. Derijcke crossed the line first, but he ducked under a closed train crossing in his solo break. But instead of relegating him completely, race officials let him share the victory with Scoubben because, with his three minute gap at the finish, Derijcke would have won the race even if he stopped. You can't make this stuff up. And if we're talking about history, how can we forget the time Bernard Hinault won the race in a snowstorm, an ordeal from which his fingers have never quite recovered?

But Liége isn't memorable for the outlier stories like Hinault's snow-shrouded victory. Instead, it's one of the hardest races on the calendar, dealing body blows to the peloton as they hit ten categorized climbs, most of which are in the 1.5-3.0km range, and none with easy gradients. With climbs back-loaded in the 263km race, it's all about who has the stamina to slug it out over six hours or more.

A reshuffling of the route. It's the 100th edition of the race, so they're gunning for a historical sequence of climbs. Well, climbs that evoke the history of the race is more like it, because we didn't get the Côte de Saint-Nicolas until 1992, but over 20 years inclusion is enough to make it historical. The early climbs are the same - the Côte de la Roche-en-Ardenne comes early at 66km into the race and then the Côte de Saint-Roch, Côte de Wanne, Côte de Stockeau, Côte de la Haute-Levée, and Côte de la Vequée between kilometers 123 and 210. That series of climbs is a trusted one, though the roads before and after the Roche-en-Ardenne are switched up a touch. Compared to last year, this replaces three climbs between Haute-Levée and the infamous Côte de la Redoute with just the Vequée. Don't worry, they make up for it later, though!

What gets interesting is the business end of the course. After a few years adding new climbs and dodging roadwork on well-liked ones, we have a fantastic series of climbs from the traditional kicking-off point of the finale, la Redoute, and the finish. Back are the Côte des Forges at 231km (1.9km at 5.9%) and the Côte de La Roche-aux-Faucons at 243km (1.5km at 9.3%). Way back in 2009, this is where Andy Schleck launched his winning move. Finally, there is the venerable Côte de Saint-Nicolas at 257km, a short 1.2km but at a steep 8.6%, rising into the double digits at the base of the climb. Here's your course map, if you were interested. 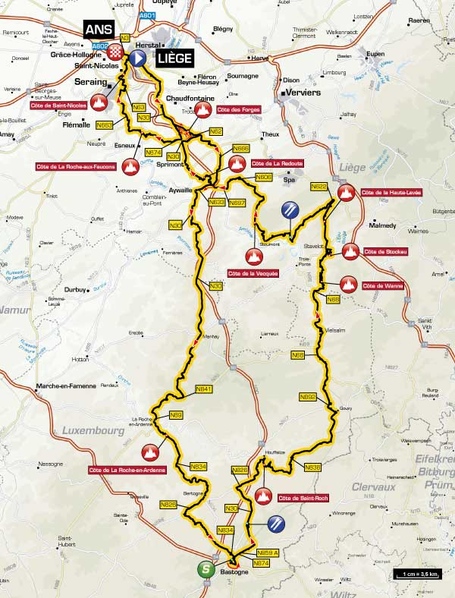 Besides being one of the most awesome one-day races of the year? Well, Liége is one of the rare races where we see the one-day specialists like Philippe Gilbert legitimately go toe to toe with general classification riders. Vincenzo Nibali has been targeting this race all year and Sky is dropping in their grand tour team of Richie Porte and Chris Froome. The results from the past five years show a greater tendency for one-day riders to come out on top, but if you can go uphill well, odds are you won't be left behind here. Nibali has animated the race in the past, and it will be interesting to see how he fares compared to the punchier riders like Gilbert and Dan Martin.

If a small group gets over the Côte de Saint-Nicolas together, the racing on the gradual rise to the finish in Ans is fun to watch. The road climbs for about a kilometer before the final left hand turn at 300 meters to go, but the gradient is not too steep so it's hard to just ride away. Last year, Joaquim Rodríguez jumped away on this climb only to have Dan Martin bridge up shortly afterwards, setting up a showdown that ended when Martin jumped clear as they neared the final bend, all with a group closing in from behind.

The party starts on the Côte de la Redoute, some 45 kilometers from the finish. The middle pitches of the climb hit 14-15% and rather than being followed by a nice downhill where riders can catch their breath and regroup, the punishment continues across an exposed false flat. Conventional wisdom says don't attack on la Redoute - wait until right after the climb when opponents on their limit are trying to recover. But this is just where the selection will be made - the winning move tends to go on or around the Roche-aux-Faucons some 25 kilometers down the road. From there, it's 20 kilometers to the finish and the chasing group won't be very big. Out of a small group, both Saint-Nicolas at 5km from the line and the gradual climb into the finish in Ans are favored launchpads. Really, it's all about attrition in Liége. The selection is as much from the front as from behind as the climbs deliver body blow after body blow.

Everyone will be looking at Philippe Gilbert, Alejandro Valverde, Michal Kwiatkowski, and Dan Martin. Valverde has won the race three times, after all, and Gilbert looked pretty strong in Amstel. But, it's worth remembering that once Gilbert got a gap on the Cauberg, he was aided by a howling tailwind in the last 1.8km to the finish, so the gap between him and others may not be huge. Simon Gerrans looked good in Amstel too and skipped Flèche Wallone to rest up for Liége, which suits him better. Sadly, Joaquim Rodríguez still looks to be suffering from a knee injury he sustained in Amstel Gold. I could rattle off more names like Tom Jelte Slagter, Jelle Vanendert, and Daniel Moreno, but they're more likely to podium than win.

Michal Kwiatkowski. I'll keep picking him til he wins one of these. Also, Valverde is the only one who I think could possibly out-sprint him if it comes down to that, and I'll give the edge to the younger guy.