In the warmer months of 2013 Simon Warren visited France on several separate whirlwind trips with the goal of cycling 100 climbs that had all previously appeared in the Tour de France.

The full title of his resulting book is "100 Greatest Climbs of The Tour de France - A Cyclist's Guide to Riding the Mountains of the Tour."   And, in fact, the meat of the book is one-hundred two-page sections individually reviewing each of these climbs.

What Type of Book Is This?

First, let's be clear, this is not a history book.  There is a short one page "Prelude" primarily talking about the introduction of climbs to the Tour de France (Col de la République  —  1903, Ballon d’Alsace — 1905, big Pyrenées stage —  1910, etc).  After this, expect barely a word of Tour de France history - I counted six passing references to pros over the entire 100 climbs, and most climb reviews contain no reference to the race in any way.  There is nothing wrong with this in and of itself.

Is this a cyclist's guide book as promised in the title? While it pretends to be a cycling guide book,  I will argue below that it fails on this count.

It may surprise you (and perhaps the author?), but I would say that it is primarily a personal adventure book.  It basically documents Simon Warren’s personal challenge to cycle a list of 100 Tour climbs.

The Introduction to the book is entitled "Living the Dream."  Here the author outlines his various trips from the UK to France.  The organisational challenges:  driving, weather, cows, fatigue, etc.  It’s a personal story of his adventure.  Fair enough.  It was a mammoth challenge to accomplish all these climbs.

"Following the drive down from Calais, I climbed out of the car, and an hour later it was one down."  "My dad volunteered to be co-pilot so long as I let him go bird watching at the top of each col."  "We bagged the necessary cols."

The above quotes are just a few examples that hint at how much this book is the summary of a terrific personal challenge undertaken as a tourist ..... rather than a cycling guide book written by an expert of the region.  But more on that below.

After the Introduction — out of the blue — is a two page guide on his experience surviving La Marmotte cyclosportive.  It is interesting enough and has a nice profile of the entire route but is presented with zero context.

The Most Important Question

Are these really the "100 Greatest Climbs of the Tour de France?" (and shouldn't the title start with "The" or "Greatest" be changed to "Great)?"  I am never scared of being labeled a pedant.

I am a little sick of misleading titles.  Warren's self-proclaimed mentor Chris Sidwells recently published a worse book than this sub-titled:  "The Toughest 52 European Challenges."  So I suppose some crazy exaggeration was to be expected.

I’ll answer the question in more detail below.  But in short: "no."  There are many big Tour climbs missing from the list and quite a few irrelevant climbs included (again, more on this below).  But, to be clear, all of the usual suspects are here:  Mont Ventoux, Alpe d’Huez, Galibier, Tourmalet, Aubisque, etc.   And overall, it's an impressive list.

I was feeling forgiving of the title, guessing that his publisher forced him to use an "enhanced" title to increase sales. But then I read the author in his introduction:  "You could argue that the book should have just been called "The Greatest Cycling Climbs of France."  No, you could not!  That is far worse (and just plain silly).  Even the author rates many of the included "greatest" climbs 1 or 2 out of 10.   Bah.

The One Hundred Reviews

OK, let's get to the meat of the book.

The climbs are organised into six regions.  Pyrénées, Massif Central, Vosges, Jura, North Alps, and South Alps.  I assume they are then ordered by the sequence in which the author climbed them, because it confusingly is not alphabetical, and there is no table of contents.  But still, it was nice to see the smaller mountain ranges being represented.

On the right page, the top half is a description of the climb.  This is almost 100% a personal diary of his day climbing. Typical examples:  "I've had the best of legs and I've had the worst of legs on this climb." "The next 4 kilometres are a little tougher," — "once you leave the village behind, things get easier," — "Head into the forest and begin 10 kms of twists and turns," — "I wanted to leave this page blank, as I’d prefer to erase all memory of Superbagnères — it broke me, ruined me".  "I rode Col de Vars on a blisteringly hot day." "If I were a race horse, I'd have been shot."

The majority of the text is like the above, describing the road and his experience riding it.  It reads like a pretty good personal blog of some guy's rides.  Again, there is nothing wrong with that.  He is not a bad writer and seems like a fun guy.  But it is another reason I call this more of a personal adventure book than anything else.

Endless drama like: "when you reach the point where you can't handle the slope for an inch longer,"  "one hell of a tough climb," "there's no end, no break, just endless, unrelenting punishment."  You get the idea.  It's fun enough, to a certain audience. Your reviewer has written far worse sentences many times.  I am not really criticising here, just characterising what you will read.  It's very different from many guide books, and again more like one-hundred short amateur blog posts.

I'd have liked at least a little context:  e.g. Tour de France history (given the title) - but it is almost non-existent.  Or something like the Rapha Great Road Climbs books that often contain interesting non-cycling history for a road:  why it was built, etc.   Or -- most importantly -- how unmissable the other sides of many of the climbs are.

But the lack of information hints at another problem with the format of the book:  Every climb gets the same amount of space.  And with 100 climbs, there is no room for detail.

As my personal blog might indicate, I am a huge fan of exposing new roads to people. But the above are just two of several throw-away stretches of road in this book.  They are not undiscovered gems.  They are bumps that just happened to have been crossed by the Tour.

The bottom half of the right page of each climb review has four boxes.  1. A fact file tells you how to find the base of the climb and lists vital statistics.  2. A profile with the steepest kilometre average % (no gradients per kilometre as per most books).  3. A Map showing climb and nearby towns.  Also occasionally,  a black line showing an alternate side. 4.  A slightly more zoomed map.

Below is an example. Please excuse me, as is clear, I just took a photo of the page.  It is glossy and looks much nicer in "real life."  :) 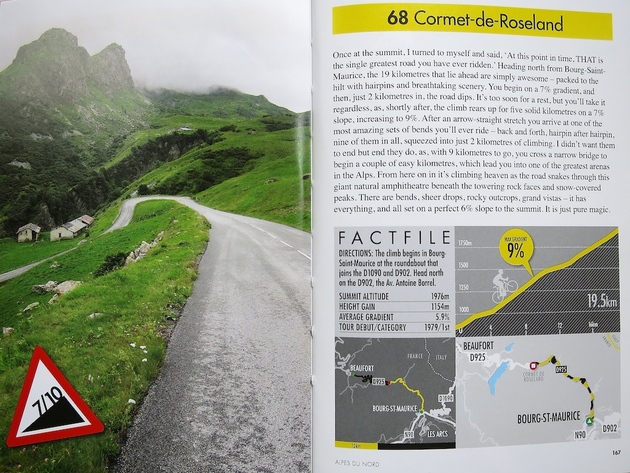 I found it all disappointing.  One of the main reasons why I am such a fan of the Mountain High(er) books is the elegant and complete climb information provided.

Let’s compare only the climbs details for Cormet de Roselend.  The Friebe/Goding books have a clear map showing all three routes up of this stunning climb.  And it includes a detailed gradient chart for all three side.  I have found these books to be fabulous for trip planning.  Whereas, the Warren book, gives just average grade data for one side.

Note, there is much more detail for each climb in the Friebe/Goding book than shown below. Whereas, the above is the entire section for Cormet de Roselend in the Warren book. 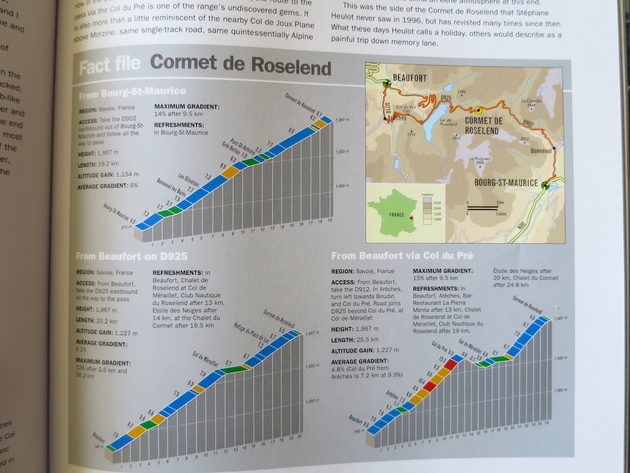 All 100 Climb are Rated from One to Ten

I like this.  It gives the un-initiated a quick sense of the difficulty, beauty, fun, etc. of each climb.  It is a very good idea.

I know, you are waiting for me to argue about the ratings, but generally, I am OK with Warren's numbers, and ratings are subjective (but wow:  Hautacam & Pla d’Adet 10/10 and Cormet de Roselend 7/10, Col de la Croix de Fer, and Col du Glandon 8/10?   What the fuck!).  Sorry, again, generally the ratings are helpful.  Seriously.

To be fair I (twice) read that he survived a lightning storm on Glandon - again, an example that this is a personal adventure book.  He had a tough time on Glandon - it is a good story - and thus perhaps he wasn't able to truly appreciate the views.

There are two bigger problems with the ratings:

Wow.  While I applaud the author’s honesty.  Do those ratings, mostly to climbs I doubt you know, make you want to visit?  Of course not.  Maybe he should have snuck up Puy de Dôme in the middle of the night?

2)  Many of the ratings reveal the weakness of the author only discussing one side of a climb.  Cormet de Roselend (7/10) and Col du Mont Cenis (5/10 ?) are two of the most beautiful big climbs in the French Alps.  Both include huge, truly stunning Alpine Lakes/ Dams.  But, guess what?  The author possibly doesn't know these lakes exist, as he never reached them.  And yes the Tour has climbed the other (better) sides of both these climbs.  A significantly better side in the case of Mont Cenis.

Thus, if you are reading this book trying to plan a vacation, you might dismiss cycling Col du Mont Cenis as a waste of time. Yikes.  There are quite a few examples where including only one side of a climb does a disservice to the reader if they might be trip planning.

I won't go on.  But I hope my point is clear?  This is a deeply flawed guide book - even for the superb climbs listed above.  And "Tour de France" in the title is just a gimmick to get 100 climbs - given how many are throw away roads.

Thus, I keep coming back to calling it nothing but a personal adventure book.

In the middle of the book is a fun 6 page section "The Spectator’s Guide to a Day in the Mountains."  It is basically a collage of Tour de France photos accompanied with advice on how to best view a Tour stage.  It is well done, amusing, and contains some good advice - seriously.  And given that two of the items he wisely suggests bringing to any stage are Leffe and Sauçisson, I suddenly feel absolutely terrible about this review.

Finally, at the end of the book, is a log-book of sorts.  It basically lists the 100 climbs (I used it as my table of contents), with a place to put: "date" "direction" (?), and "time" for each climb if you choose to replicate his adventure.

The book summarises a fairly impressive personal achievement:  A bunch of challenging cycling climbs crammed into a few trips.  The short climb summaries are relatively engagingly written.  It is a decent enough documentation of his personal adventures.  But unfortunately it is not much else and frankly not a great trip guide.

This is just a list of climbs, there is no inter-connectivity at all, no routes suggested, etc.  Thus doesn't it need to act as an expert on each climb if it purports to be a guide book?

I really wanted to like this book.  But incomplete and sparse information for every climb, too many worthless choices, and an almost complete lack of any Tour de France context (given the title), makes me unable to recommend this book as anything more than a tertiary source for cyclo-tourists.  But it is a great collection of memories for the author and his family.