A quick reminder that winter is not yet quite behind us as snow forced the Tour of Romandie to exclude its most majestic (note: humor) climb, the SimplonPass, and race a shortened first mountain-stage. It didn't make the stage any less entertaining though.

With just eight days to go before the Giro is upon us I can't help but look at Romandie with (stylish designer) Italian glasses. With a wide-open Giro without the massive pre-race favorites we keep looking for any signs of who might be bringing some form an serious intentions to Italy.

So far the big deal in Switzerland is not a Giro hopeful though but an Ardennes-survivor. Michal Kwiatkowski is bringing the leftovers of the form that made him perhaps the standout rider in he classics last week. A strong prologue and a shortened stage that probably played into his hands sees him leading the race after two days. His high-mountain climbing wasn't put to the test today though and that's still were we have our doubts. Friday will give us an answer on that and odds are that he loses his lead then as the big boys come out to play. If not, we might be in for an exciting Tour de France for Polish cycling fans. 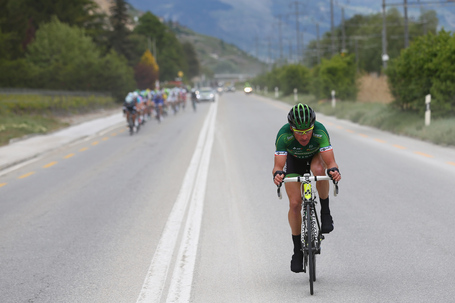 Voeckler once again tries to steal the day.

While the stage today was won by Orica's Michael Albasini who played the finale to perfection, the big animator (except for a token dastardly late attack by everyone's favorite tongue-wagger Thomas Voeckler) was Vincenzo Nibali. After Sky did their dull best to control the one climb of the day it was Nibali who threw caution to the wind by attacking in well known fashion on the downhill toward the finish. On a winding hairpin descent he was able to build a 30 second lead before the flat final 8-9 km. In the end it wasn't enough as there were some focused chasers in the group but it was close enough. What it leaves us with is mixed emotions. Sadness that he won't defend his Giro-win in the weeks to come but also a small ounce of hope that maybe, just maybe, he could be enough of a shit-stirrer come July that he could stop the TdF from becoming a monotonous affair. Heaven knows that we probably need animators more in July, when Sky bring out their Battalions of Boredom, than we do in May. 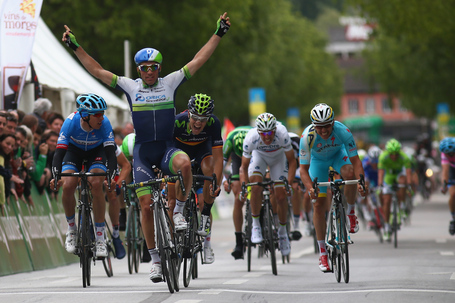 Albasini with his usual power and smarts in hard finales.

So how did  the actual expected Giro GC candidates do so far? Well, there aren't really any standouts. They all finished safely in the frontgroup today without making much noise. A guy like Rafal Majka who has been almost invisible so far this year looked to be right where he needs to be though, as did his teammate Nicholas Roche who even had a bit of a dig to try and bridge to Nibali in the finale. So Tinkoff may actually feel pretty good about their chances even if they don't have an absolute favorite for the Giro win. Another visible rider was Rigoberto Uran who once again went to the front when it mattered to help reel Nibali in. This is the second stagerace where he has worked for his younger Omega Pharma teammate Kwiatkowski. I'm guessing there is some understanding that the roles will be reversed come July but one can't help wonder if things will work out so smoothly? But before we get to that potential soapopera Uran has to get through a Giro where he presumably has high ambitions too. Judging by today he should have little to worry about, the sluggishness of Tirreno seems gone  and he looked like a man with surplus.

Like Majka, Lotto's Maxime Monfort is another rider who has been completely AWOL until now. He's avoided the Ardennes where he usually has a go, in favor of full Giro focus and he looks like he might be on course. He's another one to follow really closely on Friday. If his spring isn't going to be wasted he should probably be a bit of a factor then. Hard to see him doing anything in Italy if he can't stick with the leaders decently in the type of climbs we'll see on the queen-stage here.

Tomorrow is possibly the one day for the few sprinters here. Sadly though, the two perhaps most interesting names rde for the same giant-Shimano team. But, should the course prove too challenging for Kittel, Luca Mezgec will be perfectly place to mop up the win. I'm not saying they will be unchallenged but Ferraris and van Poppels don't really get your knees shaking do they?