Share All sharing options for: Blackburn Design: Busting Out

I was a Blackburn Design customer a decade ago. They were really good at making somewhat expensive, high-quality floor pumps, and for once in my life I had disposable income and a dwindling tolerance for cheap stuff. I bought a double-barreled something-or-other that pumped at two different capacities. It worked for ten years, and probably would have kept working had I not tried to take it apart one day. [In fairness, something on the inside had slipped out of position. So there.]

Nowadays Blackburn, based in Scott's Valley, California, are part of the Easton-Bell juggernaut of sports brands, but as their high-end, rugged cycling parts purveyor. I've been asked to sample a few items, and while the world is full of increasingly rugged, high-quality cycling components, I can think of a few things to say about Blackburn's stuff and the company as a whole.

First off, I've previously mentioned the Ranger Program, where Blackburn are sending adventurous souls off for the summer with some basic provisions and a number of Blackburn products, to test their worthiness over a long, long haul. That seems to be the demographic here, and it's one that probably sells pretty well.

First off, there's the matter of a 500-lumen (re: retina-melting) headlight. 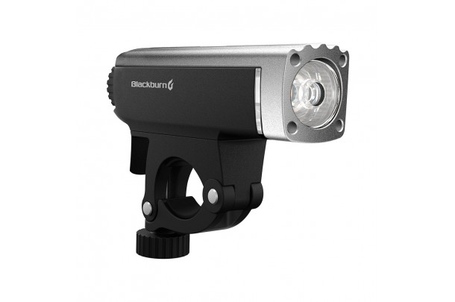 What it is: A commuter light for the year-long riders, and for night-time competitors. It's solid, lightweight, and easily bright enough for me on my sometimes very dark trail home. Its battery will run for 1.5-3 hours on the high or strobe functions, or 12 hours on the Smart function. More on that in a sec. The weight, battery life, and even the look are quite comparable to NiteRider's Lumina series.

What it isn't: An ULTIMATE NIGHT RIDING EXPERIENCE light. If you want 1200 lumens (which will melt pavement), it's not apparent that Blackburn are headed in that direction. They carry a range of "see" and "be seen" lights, this being the best of the former, and the latter being your typical fun flashers. For hardcore ultradistance riders, someone else has your back.

How it stands out: The Smart function, which is an opening at the top of the light through which it senses the presence of ambient light and adjusts the beam down to a battery-saving level, or pops it back up to 500 lumens when the light disappears. This can get you up to an estimated 12 hours of run time on a single charge. Pretty handy for dusk (and maybe dawn?) when you might want to use it in be-seen mode as darkness falls. Smarter is better.

Another shift toward higher performance road gear, the Ligera Saddle is Blackburn's inaugural effort at something that belongs on a serious road bike while providing good comfort in the long run. 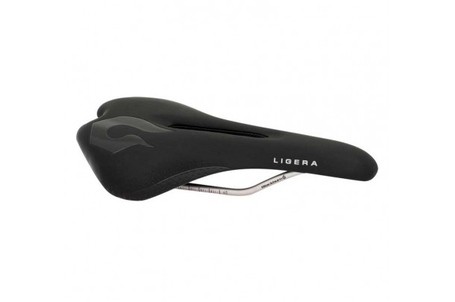 I've been riding this for a few weeks now, and I can say it is a great fit for my commuter bike, which is also my cross bike: 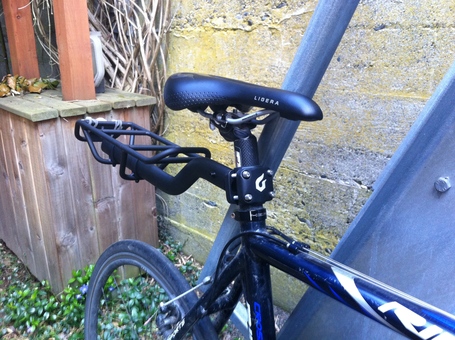 And in the offseason, it's my odd-job bike where it's tasked with anything I don't want my racers to do. A bit heavy duty, and at 295 grams this isn't your ultralight racing saddle. But the flex points have a tiny bit of give to them, making this by far the most comfortable ride I've had on my bumpy CX-bike adventures.

The cutout is nice. I'm not sure everyone's tuckus is the same shape when it comes to saddle fit, and at first I didn't think we were a match. But with some repositioning I got it dialed in. It's very comfy and a nice replacement for the clunker I had there before. I plan to put it through a season of Cross just to see what it can really do. 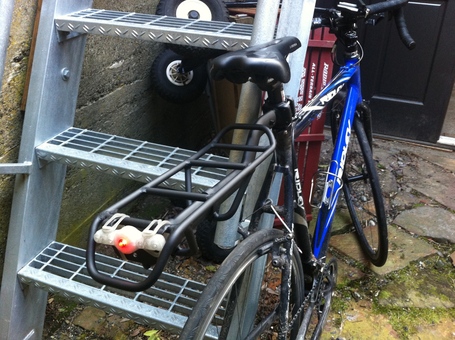 Now, before you say anything, I will be swapping out that carbon seatpost before subjecting this rack to heavier duty. But for someone who uses racks only intermittently, this is perfect. It took approximately 90 seconds to install. It required zero thinking about my temperamental road and/or CX frame connections and their insuitability for racks. Basically, if you have a seatpost (and I think you do), then you can mount this sucker. In 90 seconds. Better still, you can take it off in 90 seconds too.

It weighs very little and can handle up to 22 pounds. Probably not your Ranger-grade material, but for people who have very definite but not extensive racking needs, this is a terrific fit.