Because Holy Week Deserves The Best Stage Race Too: The Pais Vasco Preview

Share All sharing options for: Because Holy Week Deserves The Best Stage Race Too: The Pais Vasco Preview

You got Ronde Van Vlaanderen to start and Paris-Roubaix to end. What about the middle? Stage race! As long as it doesn't overlap. And if you can't stay in Belgium because that country would explode with goodness? The Basque country seems like next place to go. Pais Vasco. Its almost like The Powers That Be for once actually gave real thought to the race calendar. But that's Holy Week for ya. Cycling heaven.

To be honest, not much. But why change a great race? Pais Vasco has got the formula down pat: constant short sharp climbs, some tidbits for the sprinters, not that there are hardly any, the always fun Eibar-Arrate climb (got to be one of the most entertaining climbs in all of cycling) and an ending ITT so as not to give everything to the pure climbers. Compare this race to Catalunya a couple weeks ago: this one wins hands down. It knows that it is to early to climb to the high snow clogged mountains so it doesn't try. But still it's climbs are such that the best climbers get found out here. This race knows that 15km at 5% grade to the finish line to is B O R I N G. Plus the TT at the end is normally hilly so the pure power guys do not have the total advantage for the overall.

The website...I LOVE this website. Check out the top and it has all the stage profiles lined up. How cool is that? For those who are lazy, here's what I'm talking about:

There. All set up for you. But actually be careful cause it is a little misleading. The base line for each stage is the same length but the stages are of course different lengths so you don;t really have all of that flatness at the end of each stage. Like stage 6-that's a 25km TT and ends shortly after the second climb there so all that straight line after isn;t part of the actual race.

- Stage 1 is a Classics type course with six cat 2 climbs plus two cat 3s. The last cat 2 crests at about 6km to go and has a 13% grade in parts. See for yourself: 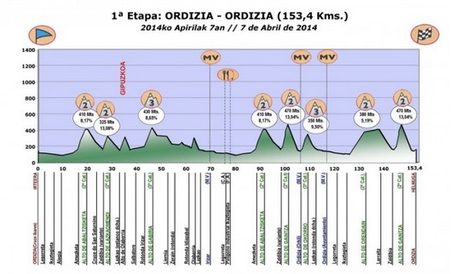 Stage 1 will show us who's serious for this race. The GC boys will have to be super aggressive right out of the gate here.

Stage 2 & 3 are for the sprinters-not that they're flat. Nooooooo. This is Spain after all. Stage 4. Oh I love it: 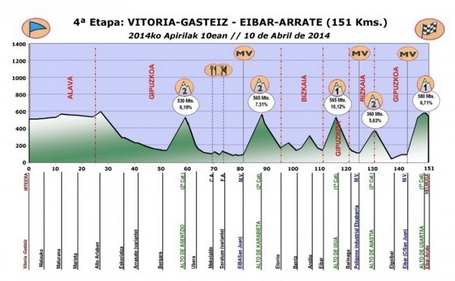 Eibar-Arrate. This is like the perfect climb. Not too long with the last three km flat and twisty for a fast finish between usually 2-4 guys scrambling for extra seconds. Here's the climb closer up: 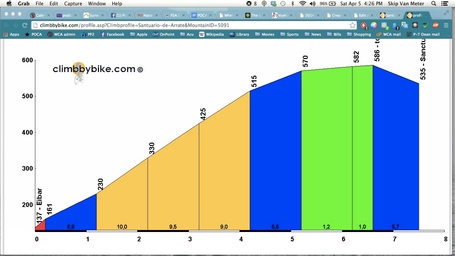 So nice. No death march. Quick and decisive. Winners here are true champions. Remember the 2012 Vuelta where Valverde, J-Rod, Contador, and Froome all finished together? That's what you want in a climb-the cream to rise to the top. And this climb does it fast. Stage four is THURSDAY people. Take off work to see it.

The last stage to decide the GC is the last stage, 6. The ITT. Just short of 26km and with a couple of 6-7% grades in the way with about 7km of climbing in total. If it is raining the descending will be interesting. 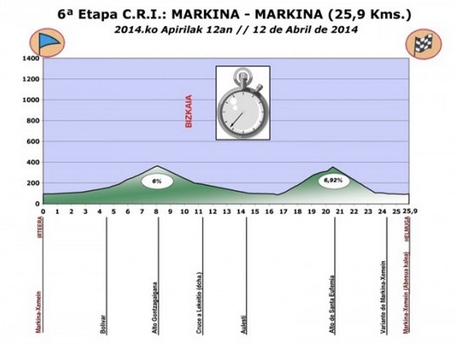 But who are the players for this race? To introduce them I hand you over to...Txirla!

Welcome back my friends! And Chris, Jens, and Majope too! You haven't cooked me yet! Just 118 days till San Sebastian! Until then we have the best stage race in the world!

There's four types of riders here: GC guys, Ardennes fast finishing climby guys, and "sprinters". We have some riders on top form for you this year. I see four top faves with a bunch of guys who could catch fire:

This course screams Bert. Just got to navigate the TT that should be to his liking and he's in like flint.

Yep, Cadel is here too (BMC is bring a deep team including Samu) but if Cadel is the protected rider here then BMC is even dumber than we all already think. Tejay just has to stick near to Bert and Al and get 'em on the final TT. Very plausible what with the form he showed coming off his Catalunya performance. Kwiatkowski has gotten lots of hype but this might be Tejay's year of truly announcing himself as one of the world's GC elite.

Don't know if another rider who's hotter right now. That Big Mig win on Saturday was impressive. That race always ALWAYS comes down to the last climb in the town. Not with Al, not this year. He attacks on the flat out of a late escaping group, plies up a minute advantage and saunters to victory. I mean Cancellara on his best days does that. Add an on-form Green Bullet can pull out a good TT.

Tejay and cadel may be here but this is basically Samu's home course and he's won it before. Could this be his last hurrah?

What may keep Rui back might be the same things that keeps Al back: he's big target is the Ardennes. Otherwise nice course for the World Champ. Eibar will be a big test. Stage 1 will be a big opportunity.

When the cat's away (Nibs), the mice will play. Keep an eye on the Astana rider as for once in a million years he's not riding for anyone here.

Definitely likes the shorter climbs over the long ones so this race is within his zone. It will be interesting to see what he does here. He started the season so strong then literally hit the wall at Tirreno-Adriatico. Took a couple of pulls in MSR and has been out of action since. Perhaps he's building again fro the Ardennes, but if he is really taking a step forward this year, this is the type of race where he should podium and possibly win. Last year he was in Belgium for this week playing the part of a donkey. This year?

Out of the box choice but he's been riding okay, if quietly. He has it in him to podium.

Home country hero will get the crowd behind him.

There's a ton of riders that could pull out something special. Most of them are realistiucally tuning up for the ASrdennes as they don;t have the chops to keep up with the likes of Bert, Al, and Tejay on the serious climbs but on their day can contest the win on almost any stage. Kreuziger might podium even if Contador wins. Cadel, Bobo and Big Bird from Belkin, Peraud and Fat n Slow, Bubble Boy, Slagter and Ryder from Garmin-land, Warren Barguil's been looking good, Pinot, Chernetsky could beat Spilak for team leadership of Katusha, Simon Gerrans is here looking for Old Willunga Hill. Tony Martin will whip the TT course until it cries but won't be able to keep up on the climbs, Txurruka will attack whenever he can.

Sprinters? Ben Swift. And...hmm. I suppose some of the riders who I don't recognize fancy themselves as sprinters but they sure are obscure. So for Swifty, his challenge is to get over the climbs to give himself a chance to edge out the likes of Gerrans and Spilak and Co.

The Giro GC heads of state. This race is too intense for their training a month away from the start. No Quintana, J-Rod, Horner, Niemiec, Ulissi, Porte, Pozzovivo, Scarponi, Dan Martin, Majka, etc.

Pais Vasco. Total goodness. I leave you until August with a story about two of my friends: