Notes From the Cobbles Desk

Share All sharing options for: Notes From the Cobbles Desk

Rider of the Day: 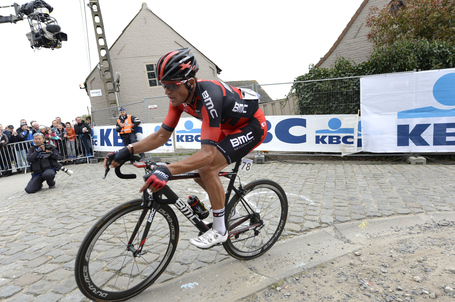 Such a category will always, in any race, have numerous nominees, particularly in a seven-hour slog like de Ronde. You could nominate that Stig Broeckx dude for powering the long breakaway. Or Stijn Vandenbergh, for starting what his team should have been able to finish. Several others too, no doubt.

But I'll go with Greg Van Avermaet. What he lacked in the sprint he otherwise made up for by taking the race to the peloton, in classic Flemish style. He took the big risk rather than just following wheels and made it stick, more or less. He did so smartly, perhaps even realizing that Cancellara was strong but not superhuman, or more likely just assuming that if the Swiss Bear were coming up, he could probably hitch a ride to the podium. And the clincher for me is... nobody's team needed a result worse than BMC. For a day, they were quite respectable. Well, except when Manuel Quinziato may or may not have cuffed a rider on the ground. But otherwise...

Surprise of the Day: 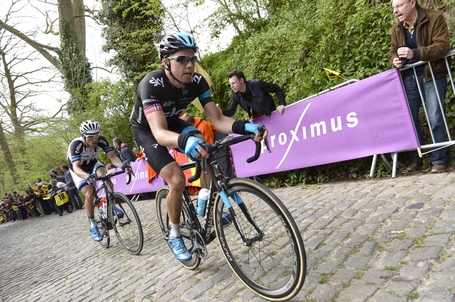 What the...? Did Edvald Boasson Hagen think Thomas was up the road and running low on water? Or did we, finally, see the very talented Norwegian all-rounder ride for himself? Am hoping the latter... and he's not on my FSA DS team this year.

Moment of the Day: 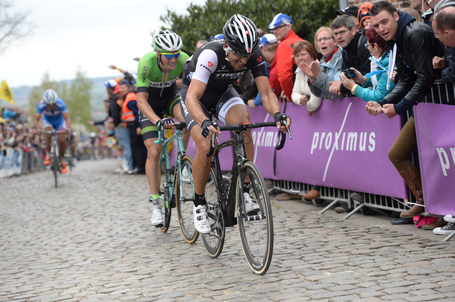 There was only one other moment, apart from Van Avermaet's attack, that defined the race, and of course it came from the rider who I once thought wasn't a good enough climber to win in Flanders. Granted, back in 2007 I never imagined a future where Tom Boonen wasn't as good a climber on the Vlaamse Ardennen as anyone else, raising more questions about "why bother?" than who else might challenge him. And my reasoning back then was that Cancellara's time trialing was the secret to his success, and played better in the Valenciennes area than it did in Greater Melden. Now we all know that power is power, and Cancellara's got more than enough to apply to any obstacle, horizontal or otherwise. Also, knowledge is power, and that's perhaps where the 2014 Edition of de Ronde was truly won.

In this video you can see how Cancellara pulls it off:

Everybody wants that back-of-the-bunch spot, which means any one rider has a one-in-four chance of attaining it. It falls, of course, to Cancellara, due to both patience and anticipation. Cancellara knows everyone is looking at him, hoping to catch on to the back of his sprint and be led home to the win. For that reason he knows he can't go too soon, nor too late, particularly with Niki Terpstra helpfully towing Alexander Kristoff up from behind. He also knows the others would love to stick him on the front. But by not taking charge too soon, Cancellara allows Stijn Vandenbergh to play his only card: a long-range burst, this time from just past the red kits.

When Vandenbergh goes, he makes the race for Cancellara. Van Avermaet and Vanmarcke -- relative strangers to the home stretch of de Ronde -- react to the Vandenbergh move by chasing him down, while Cancellara, who had swung left, reacts to the move by seizing the coveted fourth spot in the final rotation. Whether the other two panicked or Cancellara cooly reasoned that there was no need to chase Vandenbergh is a chicken/egg question. My sense is, they panicked and that was what Cancellara reacted to. Had they let Vandenbergh go, at some point Cancellara probably chases. Once Cancellara sees the deck reshuffled, he moves himself into position. Game over.

Great patience. Did he anticipate a move from Vandenbergh? Perhaps. It's not like the mega-Belgian has any hope in sprinting, or that any of the other three were unaware of this fact. Vandenbergh had to try something from further out. Perhaps Cancellara knew it was coming -- his chance to win was from a long way out, or nothing. If Cancellara expected this, then he was expecting a chance to grab the coveted last position. Either way, he maneuvered himself perfectly.

Somewhat off topic, it will be potentially interesting to see if Johan Van Summeren's collision with a spectator leads to a legal porceeding of some sort -- against the rider. Such are the "rumors" or perhaps "discussions" in the Belgian press. Though perhaps they're just talking amongst themselves. But what if the elderly lady files suit? Or worse, what if the police determine that it's a criminal matter?

The latter seems absurd, at least as far as criminal law generally contains an element of intent, though I'm sure Belgian law has its quirks like any system. I've read that the police made an inquiry into the matter, but that's all so far.

More likely we are talking negligence, but whose? What duty do riders owe spectators? Not to hop onto traffic islands? That may be the basis for a claim. The UCI drew some additional attention this spring to where riders may or may not cut corners during a race. Now into their laps lands a high-profile case with circumstances they may want to review. But from my one look at the video, which I won't be repeating, there is nothing gratuitous about Van Summeren's maneuvers. He seems to be reconnecting with the field coming past a roundabout, with plenty of company around him. When the people sitting on the traffic island come into his view, it's highly unlikely there was anything he could do to avoid them. If he was on the course, and collided with someone sitting on an island in the middle of the course, it's hard to hold Van Summeren at fault. If this was a case of cutting a corner, I don't see it.

Van Summeren apparently is demonstrating numerous signs of deep distress over the incident, and both he and of course the injured woman are in the thoughts and prayers of many. Particularly the latter; if she recovers somehow, that would go a long way to making Van Summeren OK too, logic would suggest. Who knows.

One thing I am willing to guess: those traffic islands will be off-limits to spectators from now on. What's wrong with the side of the road?

So how was your Ronde? Me, I had a parcel of houseguests, which is remarkable considering the race ended at 8am. Each year I send out what I deem "the worst party invite of the year" -- to come drink beer and eat frites and watch cycling at 4am or so. Since we're talking my world, where the recipients all have kids, the suggestion is not generally taken as an invitation to stay out extra late and pull the all-nighter. I promise lattes too. By the time my kids got up, a Rodenbach Grand Cru (which is an anagram for RONDEbach grand cru) was gone, as were half the pastries and two-thirds of the frites. Plenty of Samourai Sauce remained, though, and the remaining donuts had the highest sugar content, so they settled in nicely. Even the dog found things to chew on that, by mid-bottle, I stopped caring about. For a race people here supposedly had never heard of, I thought that was a pretty solid turnout. It did cut into my commenting, but sometimes you have to enjoy what a meatspace Podium Cafe experience would be like.