Paris-Roubaix Preview: One Man Against Them All

Share All sharing options for: Paris-Roubaix Preview: One Man Against Them All

The Cobbles Season effectively comes to an end Sunday, which is my way of saying that Brabantse Pijl doesn't have enough cobbles for my tastes. Does anything? Well yes. This race does.

Paris-Roubaix is an anomaly in the sense that, lacking hills, it invites the strongest of the strong, the biggest of the big, guys whose body type limits them from even contemplating victory in about 95% of their race starts. it's a special day for a lot of people in the sport, but for a select few, it's a really special day. Like, their whole season. And it would be a shame if anything were to happen to it.

Fortunately for those riders, the weather promises fewer arbitrary events, looking reasonably dry in Greater Lille from now until past race day. So with that in mind, and a field that is studded from top to bottom with all the sport has to offer in the way of legitimate aspirants, we get perhaps our most interesting Paris-Roubaix edition in several years. Recall, last year Boonen was out and Cancellara's win seemed inevitable (even if it wasn't). The year before, it was Boonen launching from the stratosphere, mainly because Cancellara was out and if he couldn't beat the Swiss Bear straight up, Boonen could at least do battle with Cancellara's legacy. Before that, we were treated to a fascinating episode where poor Gulliver was pinned down by King Vaughters' Minions long enough for one of the Lilliputians to steal the win. And so on. Cancellara, with whom all conversation must begin, has been stellar but not dominant, so while eyes may gaze upon him more than in any other direction, they will not do so to the exclusion of, say, taking a shot at the win. Lots of people can win this one. If they're smart enough and strong enough to pull it off.

I know they call it Hell but it sounds like heaven to me.

Today concludes my Classics preview set, done in the structure you've seen before and in a somewhat longitudinal way. Meaning, rather than tell you what you already know about the who-what-where, we try to find something interesting to say about the race and parcours from a longer perspective. In that regard, Paris-Roubaix falls somewhere in the middle of the variability scale. Most people know the story about how the cobblestones were on the verge of extinction until the 70s, thanks to the tendency of local mayors to look upon the shabby cobbled roads as an embarrassment rather than a brilliant athletic battlefield. But then the race was becoming a snore, and suddenly the loss of that valuable treasure -- a Monument of Cycling -- became an urgent matter, and now, as Alain Bernard of Les Amis de Paris-Roubaix says, mayors come to him with cobblestones.

In the last decade the pattern has been one of modest tinkering. The Millonfosse secteur was introduced and people said it would cause problems, coming so close on the heels of the Arenberg Trench... but its effects were not terribly dramatic, and it's out this year. What we have, all in all, is a fairly stable parcours -- not immune to occasional changes when secteurs fall into disrepair, but even that seems less likely as time goes on and the dollars and volunteers keep coming to the rescue.

Here are this year's cobbled secteurs:

And yes, we will use the French spelling of secteur. Or I will anyway. You can do what you want, no matter how uncool it is. The only novelty here is the insertion of #s 24 and 23 (2000m), which take the place of the Vertain secteur, 2300 meters of three-star cobbles. Nothing too heated happens before secteur 19.

The Cancellara storyline is the dominant one. If he wins, he becomes arguably the greatest cobbles racer of all time. OK, people will argue to the death over that ultimate determination, but three Doubles and sharing the title for most victories in both Flanders and Roubaix with Boonen and others is as good as any record gets. And that's before you start looking at qualitative factors. That's on the one hand.

On the other, this is, as I said above, a less than dominant version of Tony SpartaBear, one who is vulnerable to the very strongest of challenges, or possibly a sprint, though hardly a pushover in either case. Who can mount such a challenge, we'll get to that in a moment.

Weather bears watching, not for rain or a so-called "Real Roubaix" but for wind. As late as Friday the forecast calls for 10-20mph winds from the North -- block headwinds -- but it's too far out to say much more than that. If those conditions hold, the last hour will be desperately difficult for any solo attack.

Oh, and just for fun, here's the oft-overlooked profile for Sunday's action: 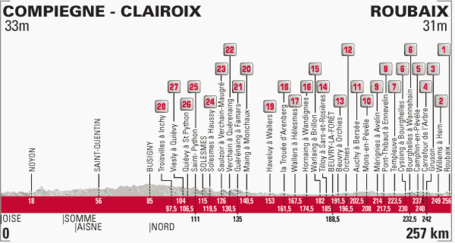 I don't know why, but that always makes me laugh a bit. Profiles...

Whom Do I Need To Know

Every team that has the ability to have multiple cards to play. Cancellara isn't likely to have much help at all, even if Stijn Devolder remains on the startlist. That leaves three scenarios revolving around Tony Spartabear:

For #1, Cancellara can win if there's a tailwind, but if I'm correct about him not being quite as his 2010 level, then this is a very, very risky move. Scenario #2 favors Cancellara, depending on who else is there. Boonen and Sagan would certainly matter, as would former track stars like Phinney and Thomas, since most of the last km takes place on a track. Anyway, Scenario #3 disfavors Cancellara, forcing him to chase too many attacks, which tends to anger him into either refusing to ride or back to scenario #1. Actually, I now know what I'm rooting for. Anyway, here are a few teams who can activate Scenario #3:

A handful of other teams have a shot at putting multiple riders up the road, particularly by being less obvious about it and sneaking guys into an early or mid-race break. These are merely the teams who could, on a nice weather day with fewer solo attacks, expect to have cards to play late in the game. But as I've said, anything can happen here.

Sep Vanmarcke. Cancellara will take responsibility for the race, like he always does. But Sep will be ready this time.