Sunshine and rain from Ireland

Three days of the Giro d'Irlanda are done. Another successful Grande Partenza without a doubt. It's hard to match the excitement of crowds that get a once in a lifetime opportunity to host a Grand Tour. For all the hassles it brings it gives back tenfold in positives. And we got great weather too!

Share All sharing options for: Sunshine and rain from Ireland

A great opening weekend
As said, I think all can agree that this was a good race start. The locals had clearly embraced the event with everything from pink-tinted mayors and city halls to big crowds lining the roads even though there was (great weather) for much of the weekend. But in all likelihood, if these people had a problem getting rainsoaked they probably would have all emigrated on the Titanic a century ago. The courses are what they are, it's the first days of the race and Northern Ireland clearly has no Alps anyway but judging by the landscape we saw the organizers could have thrown in a little bit more challenging roads couldn't they? But RCS probably look for more scenery and sprinters stages for these first days than anything else which is understandable if slightly dull. We'll see how things work out in July when we reputedly will be treated to both exotic foreign locations and hard, challenging courses. Can we handle it all or will we swoon like dainty Victorian ladies at all that excitement at once?

Ag2r
As for the General Classification race we didn't see too much and certainly not of the positive variety. The strong effort of Ag2r in the Team timetrial was a highlight though. If this race is to become anything but a predictable two-horse affair between Quintana & Rodriguez the other contenders really need to step up and avoid un-necessary time losses (because face it, they are going to have a tough enough time of it anyway). On that note it was good to see Ag2r defending their captain who admittedly goes under his new guise a as the timetrialling superhero Der Pozzerwagen but who I fear most of us still see as vulnerable in the TTs. I must admit I have a vision, justly or unjustly, of Ag2r as one of those teams that seem to ride uninspired TTTs that somehow leave their captains with oodles of time to make up before the real race has barely begun. But not so this time, instead they put in a solid mid-level placing that keeps the little dude well in contention. They also managed to keep him out of trouble in the messy roadstages, he didn't join the Astanii on any mushroom-picking expeditions and he didn't go headfirst into some roadsign marked "Tipperary 227 miles" either. Irish mission accomplished for them.

Ben Swift
I'll admit it, I'm pandering to the Sky-crowd here. What else are these poor sods to do, without resorting to drink, to keep spirits up but celebrate the little things? And Swift is quietly putting together a career saving season here. Suddenly it's starting to make sense why Sky would piss everyone off by buying the kid out of his contract back in the day. Suddenly we're seeing glimpses of greatness in him that point to bigger and better things. Too bad though that his sterling effort was thwarted in the last second by big bad Marcel who came thundering over him like a giant Thüringer bratwurst to grab the glory. Better luck next time Grand Tour Team Sky. 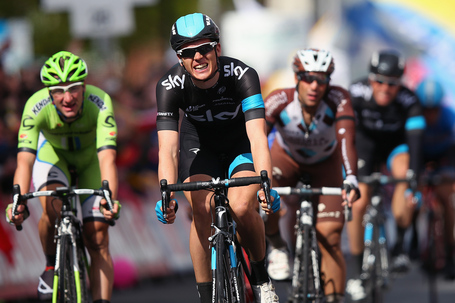 Orica-Greenedge
Is this starting to become their thing? Taking leaders jerseys and handing them around in the team? Well, that part may be a fluke but it is great to see teams making the TTTs a priority and a specialty. The TTTs are controversial for a number of reasons but it is hard to deny how they really serve to highlight the team aspect of the sport and when teams that really put their hearts into manage to win the scenes are spectacular. And there really are some potentially great rivalries here. Right now the back and forth between Orica and Omega Pharma really serves to make these stages highlights.

Dan Martin & Garmin crash
Do Irish people swear at all? Or are they known as meek, timid folk who are hard pressed to take the Lord's name in vain or to use harsh language in any way? I have the sense that I have heard it's the former, I probably read it on Wikipedia or something. Anyway, I think some swearing is in order since that was one of the shittier starts we've seen a team have to a GT. Not only was it complete disaster for the whole team when Martin sat by the road holding his collarbone and Hesjedal lost minutes, it really ruined one of the more intriguing storylines in this race for the viewers. Can Martin, who is clearly a few levels above what he was a year or two ago, be a genuine Grand Tour contender? Can he do the full three weeks, stay with the best in the mountains and not make a complete hash of the timetrials? All of this I thought we were going to find out here in May as he clearly came into the race in perfect condition. Now we're left with a poorer race and no answers. Screw you, Irish manhole covers.

Messy stages again
It doesn't seem to matter where you go these days, first days of GTs in foreign countries are doomed to be littered with road furniture and random crashes. We didn't get too bad victims this time so let's not get our panties in a twist but it is weird that we can't escape this pattern. Maybe the rumored upcoming Dubai Grande Partenza will be the shining exception to the rule? Yay.

Rest day already?
Starting the race way the hell away from Italy is fun and all but it does lead to long transfers. This year's solution, arrived at in cooperation with (or at the request of?) the teams, is to add the third rest day. The rest day we are in the middle of right now. It's too early. I wasn't ready to take a rest from the Giro yet. I still have clean underwear and plenty of food and beer in the fridge.

Raining while the sun is shining

Marcel Kittel dominance
Yup, he did it. He dominated the way we feared he would. So, it's cool to see the emergence of the new man on the "Fastest Man in the World"-throne but he might really turn a lot of these stages into processions if he keeps it up because clearly no one here can match him, Upside: watching Briljance at work is always a privilege. Downside: zzzzzzzzzz .
With any luck the Giant-Shimano train will keep misfiring and the other teams will come up with something (black magic?) to even out the chances. Preferably before tomorrow? That would be awesome, because falling asleep in front of the TV just isn't dignified.