Maglia Rosso Passione: Can a Sprinter Make It to Trieste?

Share All sharing options for: Maglia Rosso Passione: Can a Sprinter Make It to Trieste?

Handicapping the Giro's most Quixotic and flamboyantly-named jersey, the maglia rosso passione, is one of those duties we've kicked around the Cafe Editors' Lounge like an old jar of pickles. "I think that belongs to you." "No idea whose it is, but I'm sure they're still fine, help yourself." And so on. Since 2005 the competition, billed as the "sprinters' jersey" in only the most haphazard way, was never really certain to land on a sprinter by the race's end, a casualty of the Giro's insistence on making the first week interesting to more than just bunch finisher types. Paolo Bettini took a couple home, and after that the sprinters began giving up -- on the competition as a possibility and on the need to hump it over ever more massive mountain passes for the privilege of watching a climber win it in Milan (or wherever). Last year, Mark Cavendish became the first true sprinter to win since Alessandro Petacchi in 2004. Cavendish, who lives in Italy and might even pay taxes there (the nerve!) for all I know, took advantage of his honorary Italian status and reclaimed the jersey with five stage victories, to the delight of the race organization.

So appreciative were they, in fact, that they changed the point scoring this year to practically ensure that a sprinter would take home the prize. Whereas past Giri gave 25 points (scoring down to 15th place) to the winner of each stage, regardless of type, now the 25-point scale applies to the mountain and medium-mountain stages, while the flat stages have seen the point scale double. Today's stage winner Nacer Bouhanni walked away with 51 points on the day, 50 for the win and another point picked up somewhere along the way. RCS have placed a pretty heavy thumb on the scale in favor of a sprinter this year.

So who's in position now? Let's start by eliminating the non-sprinters. Last year's competition was won by Cav with 158 points, while the closest climber, Vincenzo Nibali, was second with 128 points. Previously J-Rod won in 2012 with 139 points, and Contador scored a whopping 186 in 2011 before results were annulled. Cadel Evans won with 150 in 2010. And so on. In other words, during the 25-point-scale era, something between 130 and 180 was what you'd expect from a top climber. 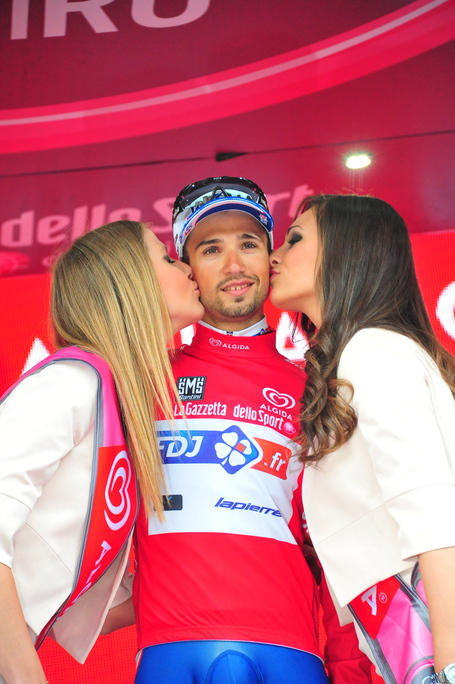 What's left? Stages 10, 13, 17 and 21 are rated pianeggiante, i.e. sprinter-friendly, and there's a medio-montagne stage in there (#11) where one of these guys might score a bonus, provided they can get over some cat-2 stuff. In other words, the sprinters are going to blow past the Contador score and pretty much eliminate the non-sprinters by the middle of next week.

It's fair to call this a four-man race, with Matthews and his medium-mountain abilities an outside shot to get in on the action, particularly if the final week sees some DNSs or time cut victims. And really, Bouhanni is the only guy on this list who didn't finish the 2013 Giro (or any other grand tour), and is therefore a question mark to make it to Trieste. He is French, after all. We're not accustomed to French riders investing massive energy into the Giro. Then again, this probably *is* Bouhanni's season. He's looking for a contract, and on a French team nothing says "you're not doing the Tour" like "Congratulations, you've been selected to ride the Giro!" Two stage wins and counting, not a bad way to parlay a new deal, with FDJ or elsewhere.

Giacomo Nizzolo looks like the next best thing, iwth two seconds and a third, but still seeking his first Giro stage win in his second go-round. He's been steady and fast, and is surely ready to pounce if Bouhanni Falters. Elia Viviani brings pretty decent survival skills to the competition, but his points campaign is more toward the "consistency" approach than the "stage-winning" maneuver. Last year he came second to Cavendish a few times but in this year's Giro he's been no better than third, with tenth today. Roberto Ferrari is the old man in this group, but lacks the speed his surname suggests, and isn't likely to win by any pathway besides "default." Tyler Farrar is clearly not back up to form after a long and decent Classics campaign. Ben Swift is bruised and battered, but could sneak back in if his body heals quickly enough.

I see this as a neck-and-neck duel between Nizzolo and Bouhanni for the next two weeks, to the point where intermediate sprints might even come into play. It's a competition, at last. That's as much as we can ask for.