Giro: Not quite Hail Mary time yet

Share All sharing options for: Giro: Not quite Hail Mary time yet

Let's face it, the Giro GC is a right mess. We've lost two of the main persons of interest in Joaquin Rodriguez and Dan Martin. The big slip and slide on stage 5 made for some completely forked up timegaps that really have very little to do with anyone's abilities on the road. Interesting side-characters like Roche and Arredondo 15 minutes behind because they had to wait for new bikes? It's like a bad joke really. Then there is a sneaky old bastage like Cadel who snuck away with almost a minute on everyone else. All of this in pretty random situations. So here we are with a GC full of pretty big timegaps for a race that hasn't even hit the real mountains or TTs yet. Is this a disaster or opportunity?

First off, lets establish one thing. Most of these gaps won't mean a dang thing very shortly. We've got two mountaintop finishes coming up this weekend and those have a tendency to sort things out pretty neatly, and fast. There's a lot of chaff in the lists right now after some fluke events but come Sunday evening a lot of the mist will have lifted and we'll have a clearer view . Saturday definitely looks like the big day with the evil Cippo di Carpegna and the weird, wacky and irregular Montecopiolo at the finish. 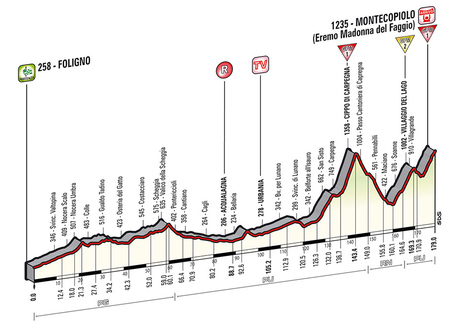 This is an open invite to all the contenders who find themselves longer off the time of the leader they had envisioned. Riders like Scarponi, Niemec and Hesjedal probably have to try and make something of these early days. Scarponi at least is going to get pummeled on the lovely wine-TT to Barolo on stage 12 and if he starts that still 2:28 down on Cadel then he might probably just as well start thinking about his TdF instead. Hesjedal is of course in Hail Mary mode and should go after a stagewin with the possibility to get a boost back into contention (if he was ever in it)  if he is going to salvage anything from this race.

While the timegaps look bigger than we are used to at this point you have to wonder how much they worry the main contenders? Quintana has two minutes up to Cadel and for him the big unknown is probably Barolo. A few years ago we would have assumed Evans to crush most of the guys in this race on such a timetrial , and essentially kill the GC, but this isn't a few years ago and Evans is now an unknown factor. I'm sure Nairo will have no worries going into the TT two minutes down if he thinks he can stay reasonably close to Cadel-14 over those 46 kilometers because he can make those minutes disappear with ease in the final week. On the other hand if he has any worries at all that Cadel might run away with it then he had better make use of this weekend. Otherwise the option is basically to hope or assume that Evans is going to fold like a house of cards in week three. I know it's a popular assumption but I wouldn't bet a single dime on it to be honest. Evans focused and on form, as he clearly is now, could be a nasty surprise for anyone gambling on him falling apart.

As for the others up there, Majka, Uran, Kelderman and Aru for instance, none of them are of the caliber that they can do any gambling. Uran for instance, one minute down on Evans, has to take time whenever he has the legs to do it so for him the coming weekend is crucial. At least if his ambition is to win and not finish in an honorable 3rd or 4th place. Because that's the upside to the tumultuous first week that everything is up for grabs here, even for the ones we would have pegged as secondary contenders before the race. A guy like Majka has a shot at the win at this point, not just a top 5 as he sits just a minute bind Evans.

Sunday's stage to Sestola is a more straightforward affair, it's all about that final climb and it feels like the potential for big timegap is limited since the final climb looks fairly regular. 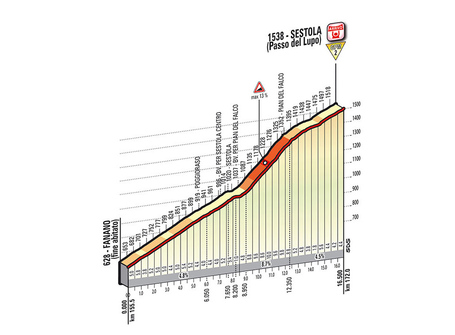 Yes it has a nasty bit  but for the most part it's a controllable climb and one that offers a chance to recover any losses. It might be an interesting barometer to gage the strength of Evans' support in case he takes the Maglia Rosa on Saturday as it looks likely he will. That might become a huge factor in the third week if Evans is as solid as I think he is because as strong as he may be, his successes really depend on a strong support around him. Most of all mentally but he is going to see challenges from all directions if he leads this race after Barolo and he can't control it all on his own. And also he may go nuts if has to try. I'm talking "don't step on my dog"-nuts and no one wants that.

First things first though. Let's first see this weekend if Evans is indeed good enough to need the help of his team. If he is, we're in for a hell of a race.