It was a relaxed day in the Giro. With a fairly light finishing climb the teams were fine with letting a big break fight it out for the stage win. Peter Weening continued Orica's dream-Giro by beating David Malacarne of Europcar for the win. Domenico Pozzovivo was the one GC contender who had ideas for the day. He attacked and gained 30 seconds on all his main rivals.

On a pretty uneventful day the peloton seemed to get a bit of a headstart on tomorrows rest-day. Once the fight to establish the breakaway was done there was calm in the peloton. BMC controlled the gap, not letting it balloon out to huge margins but not really doing much to keep the stagewin within reach for the main group either. They briefly sprung into action on the last major descent of the day but there didn't seem to be a whole lot of strategy behind it. In the end none of the other teams took to the front to close the gaps and get their man in a position to take the stage and it was clear that the stage would be decided among the strongest climbers in the breakaway. 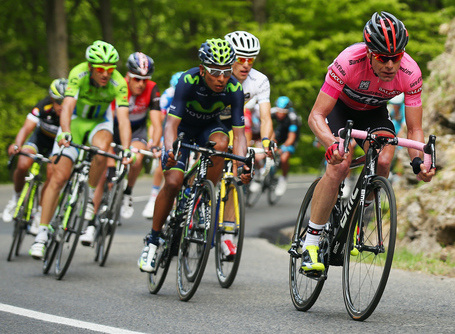 Peter Weening, unhappy with how the group was working, made a decisive attack at the bottom of the final climb and the only one who was able to join him was Malacarne and the two established a cooperation. Enrico Barbin tried to join them but was lost in no-mans land. Tne main contenders swept up the remains of the breakaway as Tinkoff set a strong pace but it was not Majka the Tinkoff captain that capitalized on the work but instead Pozzovivo who tried his luck on the steep midsection of the climb to Passo del Lupo. He quickly opened  up and maintained a 20-30 second lead on the rest and came quite close to catching the two in front.

Weening and Malacarne just had enough though to fight it out between them and after some brief track-tactics Malacarne opened up the sprint in the final 500 meters only to see Weening come around him in the final curve and take a comfortable win, Orica's third in this Giro. Team Belkin was not so lucky with their top lieutenant Steven Kruijswijk forced to abandon the race due to the injuries he sustained in the big crash three days ago.

Next up the peloton takes a rest day on Monday while we gear up for the big GC movements to come. Tomorrow we take stock of the how the favorites are doing so far. I don't want to post too many spoilers but some of them are doing terribly and have even abandoned already.