It was a day we expected the breakaway to stay away for sure but after an odd and hectic stage it was Tinkoff-Saxo Bank's Michael Rogers who snuck away on the final descent to stay away for the win.

Share All sharing options for: Michael Rogers steals the day in Savona

It was a brutal start to the day as everyone was keen to hit a breakaway that everyone thought would have a great chance to stay away. It wasn't until after the first climb and descent that a group of 14 got away and established a lead of 4-5 minutes. Unfortunately for them though Androni Giocattoli had missed the break and their manager Gianno Savio would not accept that as fait accompli. Instead he set his team on the front to chase down the break which they did methodically. By the time the peloton hit the lower slopes of the last climb Julian Arredondo attacked and got a good gap as they started sweeping up the break. Arredondo was joined by others and his attack never looked a danger to stay away but instead looked like a hunt for KOM points to strengthen his lead in that competition.

With a large group together as the started the descent there was a lull in the action which offered an opportunity that Rogers seized to go full gas downhill and open up a gap on a more conservatively riding, BMC led, peloton behind. Near the bottom a few others,feeling the opportunity for a win was slipping away, tried closing the gap but it was a tired bunch with no teams capable of putting in an organized chase that saw the gap drop slightly only to go up again just enough to allow Rogers to celebrate a little as he crossed the line 10 seconds ahead of the chasing peloton. 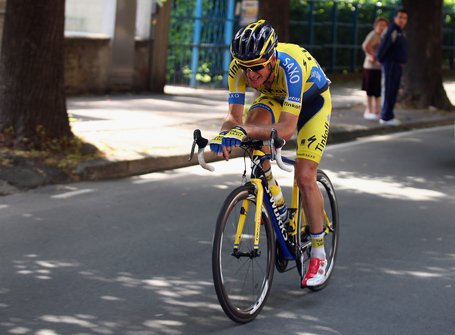 The win was an obvious relief for the recently returned from a shortened clenbuterol-ban Michael Rogers. It was also the first Grand Tour stage win for the team since Oleg Tinkov took over ownership of the team. The Russian was last seen by the teambus on his way to buy "a few magnums of Dom Perignon" to celebrate. Less fortunate on Tinkoff was CA Sørensen who was one of the many who crashed on the first hectic descent of the day. He finished but may be doubtful to start tomorrow with a sprained but not fractured wrist and possible concussion symptoms as he claimed to not remember the 20 kms after the crash, a worrying sign that the team doctors hopefully take seriously.Nastiest injury of the day was Garmin's Fabian Wegman though who was forced to abandon after severering a hamstring in an early crash. Other crash victims included Sky's Salvatore Puccio who looked badly scraped up, Dylan van Baarle and not least Lampre's Diego Ulissi who lost over four minutes on the stage and suddenly dropped from his very promising top 10 place in the GC.

All in all the stage turned out to be anything but the quiet day ahead of the important Timetrial that the GC candidates were hoping for. The racing was full on from start to finish and it will be interesting to see if that impacts on tomorrows performances. There will be some nervous riders tomorrow as we cross the Piemonte wine-country in a hilly and hard 42 km timetrial from Barbaresco to Barolo. It could very well have a dramatic impact on the general classification and it will certainly shape the racing in the mountainstages to come depending on how the timegaps look when it's done and dusted.