before we get into the road race thing, let's talk a little about the time trial. Taylor Phinney earned himself another title. on the women's side, Alison Powers powered (apologies for the word choice) her way to a stars and stripes jersey, putting 30 seconds into last year's winner, Carmen Small, and a minute into Evelyn Stevens. i was there, took some horrible pictures, got a sunburn, left as the first men were hitting the course. all around a good day. 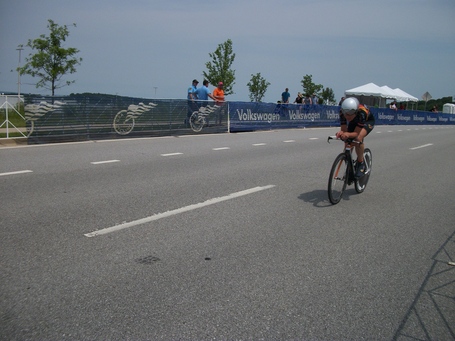 and here's Alison Powers on her way to winning the race: 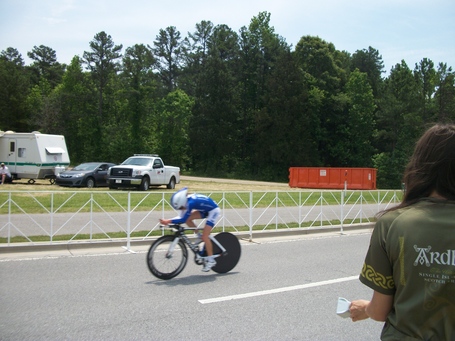 (you have no idea how many pictures of that orange dumpster, with not a rider in sight, i took yesterday. if they had a worst cycling photographer in the USA championship this weekend, i'd be returning home with a stars and stripes UCI vest)

looking back even earlier than yesterday's race against the clock, which didn't seem high on Maura's list of priorities for the year, i asked her what her goals were this season. "I was hoping to go well at the European Spring Classics and all in all, I'm happy with how I did, 6th at Le Samyn des Dames, and 15th at Omloop van Hageland. I'm excited to have finished the great World Cups like Ronde van Drenthe and Tour of Flanders."

"Next up, Optum will be looking to repeat with the stars and stripes at the USPro National Championships in Chattanooga. I'm really excited to race with my Optum teammates in this second half of the season! Another goal will be to get back to Europe later in the year."

now is the next up, the main event of the weekend, the road race, won last year by Jade Wilcoxson and fast Freddie Rodriguez. whether Freddie can once again catch back up with the more climby types coming off the final climb, and Jade can evade a small group in the closing circuits remains to be seen.

one thing both of those wins indicate, is that Maura just might be there when it matters tomorrow. when asked what type of rider she was she replied with "I think so far, I've found that I'm an explosive type of rider who likes power, drag finishes. Long climbs with 5% body-fat girls and bunch sprints with trackies are my weaknesses. I'm somewhere in the middle." but with the returning champ on her team, odds are she will be in a more domestique mode. this is bike racing, however, and who knows how the cookie will crumble once the start gun goes off.

the course profile suggests a climber's race. the climb to the top of lookout mountain is by no means alpine in length or gradient, but it is significant. and with a forecast calling for temps nearing 90 degrees, it could be brutal. the in-town closing circuits temper the climbiness quite a bit. a disorganized group of climbers are by no means safe from a few sprinters or rouleurs catching back up to them and spoiling their finish. this course is fairly similar to that of greenville, SC (previous host of the championships), where we'd seen solo wins and small group finishes. neither seems like a sprinter's course, but Fast Freddie has once before disproved that view, and will hope to do so again this year.

"I really enjoy visiting parts of the world that I would've never known existed, much less seen, if I didn't race bikes: be it a picturesque European town or a nook and cranny dirt trail off the beaten path of a popular climb. I love not only the physically-taxing nature of cycling but also its unique element of mental exhilaration that tactical racing brings. I love the sponsors that really want to promote women's cycling. I love the camaraderie of a team sport as hard as this one."

"I don't love that when I was sitting, pinning my race number before the start of the World Cups this spring, that the huge men's buses would roll up and I would be reminded that the minimum salary for our male-counterparts is 40,000 Euro (and probably more than that if they were selected to race a World Cup) but there are women at these same races making $0. I hope that one day, more female cyclists will be able to become more independent and not have to rely on the financial support of family and friends in order to pursue a profession in a sport they love."

I wish Maura and all her Optum teammates all the best tomorrow, and thank her again for being gracious enough to spend time answering my questions. see you folks tomorrow.