Where the Giro will be won

One week of Giro to go. Four big big stages that all have the potential to wreak havoc on the general classification. Four very different stages with just one thing in common, a metric fark-ton of climbing. Let's look at where this Giro could be decided.

Share All sharing options for: Where the Giro will be won

Going into the final week this is what the GC looks like. Seven minutes within 3 minutes loomks pretty narrow given what the final week looks like.
There's a few dangermen lurking just outside and one or two of them look likely to squeeze into the top 10 before this is over but the main action will be between the ones listed above. So far we've seen strong days and weak from all of them more or less so it's hard to say that there is a standout performer so far in this race. Uran of course has been the steadiest but then again we've seen him be just off the best in the last two stages and in the kind of terrain we're coming into "a little bit off the best" can translate into a lost top spot pretty quickly. 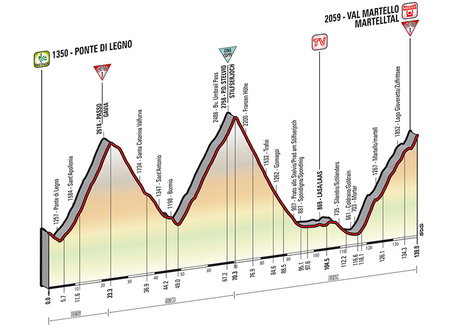 First let's just be grateful that this beauty of a stage looks set to actually take place. It was cancelled last year and after a long period of good weather the stormclouds gathered in the last few days to make it look in jeopardy. It could still run into last minute problems but as it looks right now we're good to go.  Frankly, just one of these beasts would be enough to put fear into just about anyone. The race goes over both and adds a finishing climb that is no picnic either. Anyone having an total off-day tomorrow will fall way out of the top 10, the potential losses are that great if you are unlucky. As well as a challenge for the top riders this is probably a nightmare for the gruppetto as well.  Falling off the pace already early on the Gavia means a long day's fight for survival.

We'd all like to see the long range attack of course but it will take a lot of stones to make a move already on the Stelvio. Expect teams like Movistar and Ag2r to keep the pace brutally high though if their captains are feeling it on the day. Quintana and Pozzovivo both have to put 2:40 into Uran to get on even terms. The fact that OPQS left Uran alone pretty early on Sunday will not have gone unnoticed and there will probably be smiles all round if they can get the leader isolated going into the Val Martello climb.
Likely attackers on the day: Nairo, Pozzovivo (if his cold isn't a factor), Rolland and Aru.
Playing defense: Uran, Evans, Kelderman 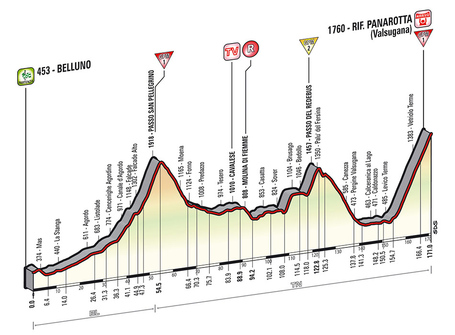 This isn't a Dolomite-heavy Giro. We won't be seeing the most iconic of the climbs but this day is typical for the territory. Three climbs and just a hard hard slog all the way. The San Pellegrino isn't too tough until it comes close to the top and the Redbus is steep but mercifully short. This is really the joker stage where bad things can happen and the unexpected early Hail Mary attacks are likely to come. If some of the dangermen a bit off the pace decide to make it into the early break, this day will offer no rest for anyone. Movistar saw what they could do to a team in the Pyrenees last year and if there was ever a time to do something similar to OPQS and Uran this stage is where to do it. It all depends on how the chips fall on the Stelvio stage of course if there will be teams prepared to go on the offensive in the Dolomites. 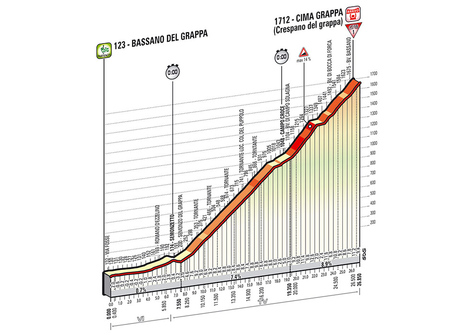 Will is going to tell us more about the mighty Monte Grappa later but seeing as how the first TT went, today is most likely the pivotal stage. The top riders seem fairly evenly matched on the road and maybe, just maybe the TT is where the differences are to be made in this race? Uran of course looked untouchable in the first one but this is a pure uphill TT more or less, and on a hard climb as well, so it's a very different challenge. It seems common consensus s for Quintana to dominate this day and the question is if he can live up to that and how much time he can put into his rivals if he does? Seeing as he lost 2:41 to Uran in Barolo it seems unlikely he should turn the tables so dramatically on him. Lets say a minute to a minute thirty secs of that was attributable to his illness, that still leaves a lot of time to make up and turn around. So a good guess is that maybe Uran just takes a little combined time out of Nairo in the two TTs and that leaves us with ........

Showdown on the Zoncolan 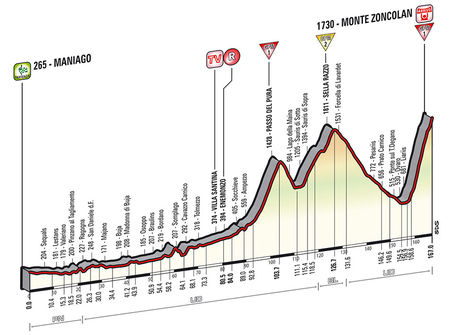 RCS clearly aimed to have the decision here and with the field they got this year it might just have turned out to be a winner. With the fierceness of Zoncolan it's easy to overlook that there is some brutal climbing ahead of it. People are going to be in bad shape already at the bottom of the Zonc and we could see carnage there in the end. Last time we were here there was almost two minutes between first and fifth. That was a week earlier in the race though and the approach was nowhere as hard as this time. It's hard to see that the race for first isn't still in play by the time the race hits the Zoncolan unless Uran goes on a rampage. Any time gap smaller than 2-3 minutes is too small to rely on.
So who handles the super steep stuff best in this field? Well , Uran put serious time into Evans, Aru, Majka, Wilco and Kelderman on Tre Cime last year so I suppose the wild card is Quintana. Is he a man for the super steep or more a climber for the long big climbs? I have to claim ignorance as I don't think we have really seen him on a test like this but the way he looks at his best I'd bet money on his ability to put a minute or two into Uran on Zoncolan if he needs it.