After much anticipation we finally got the Gavia-Stelvio stage and it became every bit as spectacular as we thought. Crazy weather made for extreme conditions up high near the summits. After a confusing Stelvio descent where the race may or may not have been neutralized, Nairo Quintana found himself 1:30 ahead of the Pink jersey group and extended that lead on the final climb to take the stage and the race lead by ultimately distancing Rigoberto Uran with over four minutes on the stage .

Share All sharing options for: Nairo triumphs in glorious Giro-mess

It will be a hotly debated stage for a long time no doubt. Conditions looked sketchy from the start but the decision was made to start the original route anyway. Already on the first climb of the day , the Passo Gavia, the race was split into small groups with only about 30-40 riders at the front. The descent was horrific with rain and sleet hitting the riders in the first kilometers. Some breaks formed on the descent and most active at the front was Sky's Dario Cataldo. The Stelvio was ridden in an orderly fashion without major events. With a few kilometres left to the top word got out through the race radio that TV commentators listen in on and via the race-twitter that the race would be neutralized on the Stelvio descent. Cataldo attacked alone before the summit and started the descent alone.

It soon became apparent that whatever neutralization was taking place had not been communicated to all riders, if any. Cataldo was clearly bombing the descent and at some point a few Movistar riders including Quintana had slipped away from race leader Uran who was seemingly taking the descent rather casually for whatever reason. Perhaps he was under the impression the race was neutralized or perhaps he simply wouldn't or couldn't take as many risks on the sketchy descent as his opponents? As it were Quintana escaped in a group with Rolland and Hesjedal and found himself just under 2 minutes ahead of the other favorites when the flat section to the foot of the finishing Val Martello climb began. That gap held as no teams had many helpers to utilize, Tinkoff used Michael Rogers and Uran had some helpers at the front as well but with little result.

Quintana lays down the law

Quintana, Roland and Hesjedal soon found themselves on the front on the first half of the long 22 km Val Martello climb. Cataldo was the last to be gobbled up as the three, mostly led by Quintana, set a strong pace. It was clear that they were slowly building the gap to the chasers as they hit some of the steeper sections. Behind, Uran eventually had to take the front too as this became apparent but he could do as little as the others to stem the slow leak of seconds to Quintana & Co. Only when riders like Majka and Kelderman attacked Uran to shake the race leader, who looked to be struggling, did the gap seem to stabilize. This was short lived though. Uran managed to bring back attacks as the road flattened out and the gap would soon start to build back up.

At the front it looked for a long while like Garmin's Ryder Hesjedal was about to lose contact with his two companions but when the road his some >10% stretches with a few kilometers to go it was Rolland who was forced to surrender. By some small miracle a visibly suffering Hesjedal managed to stay with the methodical, smooth-pedalling Quintana. Time and time again he looked certain to drop off (and crumble up in a foetal position by the side of the road) only to hang on, to the visible consternation of the Colombian. After a short pull at the front on a flat section the Canadian  was forced to finally give up though and let Nairo away to win by a slim 8 second margin, it was one of the more memorable efforts in this Giro so far.

On the same flat section Belkin's Kelderman also escaped the group behind  where most of the top 10 riders were joined. Cadel Evans had been forced to let slip already but was chugging along close behind. Pozzovivo, Aru and Majka at last managed to use the final steep section to escape Uran too and take some time on the previous leader who after the finish finds himself 1:40 behind Quintana, ironically roughly the same time he lost on the disputed Stelvio descent. 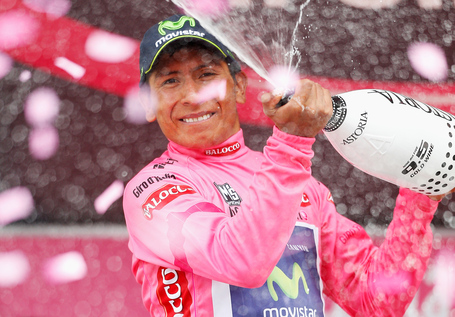 The new leader, Quintana today showed himself every bit as impressive as we had predicted before the Giro. A worrisome time deficit of nearly three minutes has been transformed into a lead with three big stages left to go. His team also looked infinitely more impressive than Uran's Omega Pharma that basically disintegrated in the tough conditions, leaving Uran to fend for himself at the end. His previous best mountain helper Wout Poels finished inexplicably in the gruppetto 44 minutes after the winner. Suddenly what seemed as a good position for OPQS has been turned on it's head by one brutal stage and they now have to go on the attack or hope that Urans uphill TT ability is as impressive as his flatter Barolo TT effort if they are going to reverse the fortunes once again.

It will be curious to see the aftermath of the confused situation on the Stelvio as it had some major implications for the race but ultimately as Quintana put on such a convincing display it may make it harder to dispute the result. We will however get tons of prima Italian polemica (not polenta) in the day(s) to come no doubt.