The Giro d'Italia is a lot of things to a lot of people. For one cyclist, a teenage prodigy whose family fled totalitarianism for Italy, it's a precious circle of memories. Meet Sorinel Ghetau, pictured above in the dark shirt second from the left, who has been reunited with his early passion through one of the Giro's sponsors, Oxfam. After trading in his bike for a career fighting for human rights, Sorinel is following the final stages of the Giro in a van with co-workers, bringing the organization's message to the people in concert with RCS. Let's hear about him, in his own words (translated from Italian):

I was five years old and I lived in Romania when my father bought me a bike from some sellers coming from Poland. I was in heaven. At Ceausescu’s time, having a bike was a luxury that not every child could afford, and that present represented an enormous sacrifice for my family. I zoomed around in town every day.

In 1981 I went with my family to Italy: an history of migration, political asylum, refugee camps (we applied as political refugees). My mother found a job at Del Tongo, which was then a sponsor of the team of Giuseppe Saronni, an historical enemy of Francesco Moser. In the coffee shops were we were staying, people were watching all cyclist competitions, including the Giro d’Italia. All inhabitants shared this passion, which bit-by-bit took along my mother and me. In 1982 Saronni became world champion: his extraordinary final race granted him the name "Arrow of Goodwood"!! I had been following the competition on the screen with my mother and all workers of the factory Del Tongo.

The next year the Giro d’Italia arrived close to my house. My passion went up, so that I decided to join the local cyclist team: I had a new bike, and this time it was fit for the race! From that day on, for more than 12 years, I went on my bike almost every day. The Italian sport newspaper "La Gazzetta dello Sport", after another victory in the youth category, referred to me as "The flying Romanian". Windows of all coffee shops in my town were covered with the page of the article. Competitions, training, and sacrifices: attending the Giro d’Italia had become my brightest dream. Meanwhile, I had become supporter of Francesco Moser, but the people forgave me: I had become their little champion.

When I was 19, I had to choose: university, or cyclism. I choose the first, and from that point on my greatest passion was to fight poverty and injustice. University, Master, and first steps in International cooperation lead me to meet Oxfam Italia, an organization who has the aim to overcome poverty and injustice. For more than 14 years I have been working with Oxfam in international programs to help poor people, farmers who produce food but suffer from hunger, victims of natural disasters and conflicts (While I am writing I am in Beirut, Lebanon, where more than one million Syrian refugees live in refugee camps… I remember refugee camps of my childhood, so far in time but so close in memory).

In these days the Giro d’Italia is again on Italian’s roads, and Oxfam Italia is social partner of this great competition. "Giro fights for Oxfam" and for all women who, in the world, fight hunger and produce food. From May 30th, to June 1st, I will follow the Giro with the caravan of Oxfam Italia, until the final arrival in Trieste. The circle will be closing, the two passions will meet and the old dream of the "Flying Romanian" will come true.

I don't know Sorinel directly but from this you get the sense that his life would make a pretty riveting book. Oxfam is a world-renowned organization fighting since 1942 to end hunger and related forms of injustice, particularly in the developing world. You can read more here. While famine may have motivated the organization's founding in Oxford, in modern times its mission is a bit more comprehensive. Oxfam's five principles are:

Several of those would point one directly to Oxfam's women's campaign. The Giro d'Italia has taken up the cause; RCS described its support of Oxfam thusly:

"The Corsa Rosa stands alongside Oxfam to promote and support projects linked to rural and women’s entrepreneurship development. The pink, the colour of women, embodied in the symbol of excellence of the Giro d’Italia, the Maglia Rosa, brings a strong and clear social message that Giro Fights for Oxfam."

That's the slogan, "The Giro Fights for Oxfam." They have given this slogan some prime real estate. Check out the arm band:

Speaking of real estate, here's the Oxfam van, with Sorinel and co, watching the peloton roll in: 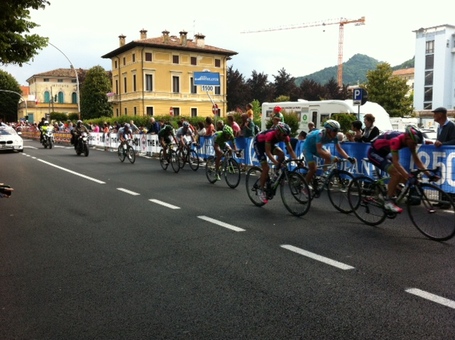 And that, i miei amici, is one more story of how the Giro d'Italia affects lives.