Benvenuti a Podiumcafe! We're just days away from the Giro and it's time to drop everything else and start paying attention. Are your thoughts lingering on how Boonen managed to lose Roubaix? Stop doing that. Is your mind churning, thinking of Froome/Contador duels in July? Cut it out. Focus! Those bums will have their day later. This is the Giro, the best three weeks of stageracing of the year!

Share All sharing options for: It's Giro d'Italia time!

If there is one way to describe this years Giro I think "laid back" is it. It's not an edition of the giant superstars, the GC battle will most likely be an even affair between a group of younger/second tier contenders. There is no hype like we saw last year around the start of Bradley Wiggins. Sure we have the possibly most interesting stageracer in the world right now, Nairo Quintana, going for his first Grand Tour win for real. While he inherited captaincy at the TdF last when Valverde stood by the roadside and enjoyed the crosswinds, this is his first time coming into a GT with 100% focus on the final victory. But it's sort of part of Quintana's persona that there isn't a lot of hoopla surrounding his bid for the win, he isn't the man of big words unlike some others. Odds are though that once this race hits the mountains, his actions will speak louder than words.

Less laid back is perhaps his main competitor, Joaquim Rodriguez. This is most likely his last really big chance at a Grand Tour win after too many near misses. The course suits him with the possible exception of a few TT km too much and the opposition isn't too intimidating. He looked sparkling in his last Giro, right up until the point where he once again let the win slip through his fingers and you have to wonder if he doesn't feel the weight of the possibilities in this race. It's hard not to get thrilled at the thought of him dueling the very evenly matched Nairo right up until the last day on the Zoncolan. It is a very real possibility it happens.

The Tour will have it's Grand Depart in the UK, a much hyped affair where the PR machinery has been going at full speed for what feels like an eternity. Prices are skyrocketing for visitors and it feels like it will be hard to live up to the massive expectations in three short days. The Giro start in Northern Ireland and Ireland has a more familiar, and yes.. laid back, feel though, like much of the race itself actually. We will see some gorgeous countryside and pass through lands where cycling, much like in Italy, has a long history. It should be  a brilliant opening weekend even if we haven't been bombarded with PR about it. 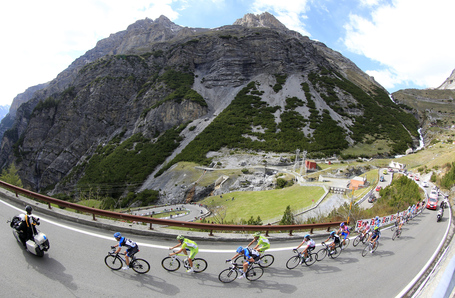 The Stelvio when we saw it last in the Giro.

I'm having a hard time seeing we'll be very laid back about the Giro here at the Cafe though. Chris is already sleeping with his Dino Buzzati book under his pillow seeing as the race will end in Trieste. He will take a rest from reading it for the umptienth time to provide a viewing guide at some point for those of you who have to economize your race watching in the coming weeks. We'll also try and provide all the rider previews anyone could possibly need before the race gets underway and before we reach the mountains we'll fill you in on those as well (hint: they're awesome). As in previous years we have our professional Gironista Susie at the race for the key bits in the second half of the race and she might provide us with some on the scene reporting unless she gets too busy enjoying the countryside, bikeriding and Italian food&wine.........ah, who am I kidding, we'll never hear from her. And then there will be livethreads and post-stage polemica of course. Get your Italian dictionaries out, it's going to be a great few weeks.