Three days in Northern Ireland/Ireland is the peculiar start to this years Giro d'Italia. Three days on the Emerald Isle which has transformed itself into the Pink Isle this weekend especially to welcome the Giro.

A team timetrial in Belfast and two flat stages along the coast is what awaits the riders. The first a loop around Northern Ireland on Stage 2 and then a ride down along the coast of Ireland to finish in Dublin. It's a pretty traditional Giro opening and we can expect much of the excitement to come from the "exotic" scenery and crowd enthusiasm.

The TTT is a straightforward city course in Belfast that should offer some cool passages by the Stormont, the NI parliament building and a pretty uncomplicated course. 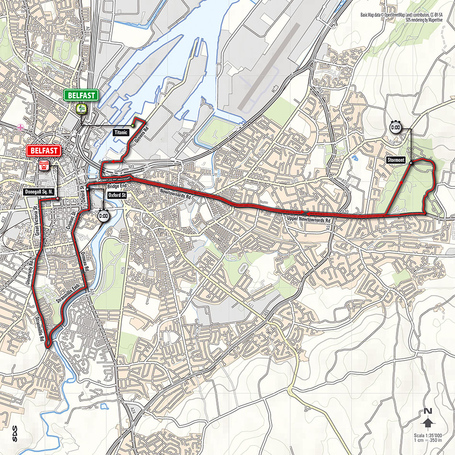 Of course if it rains, which sounds implausible in Belfast I know, any TTT in a city is bound to end up getting tricky some way or other. It's a relatively short 22 km course though so teams won't worry about losing too much time. There are a few teams under pressure though. Katusha and Ag2r really need to avoid putting their captains in too much of a deficit. Otherwise it should be a pretty straightforward win for Orica. They've stacked their team for this day and none of the other teams that traditionally do well in the TTTs have their big engines here. Movistar and BMC look solid but not as well equipped as Orica.

Then we move on to all sprinting all the time. Stages 2 & 3 both promise to be pure sprinter affairs even if some are speculating that we might see some crosswind action, especially on the road to Dublin. But be that as it may,  both of them plus the stage to Bari after the first early rest/transfer day should be for the sprinters. And by sprinters I of course mean Marcel Kittel. 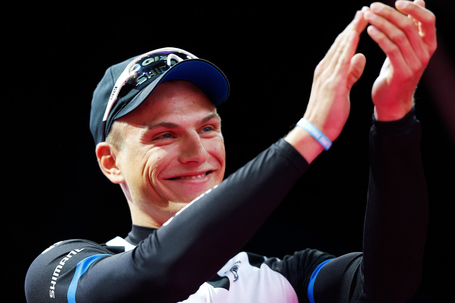 The big assumption here is really that Kittel will be head and shoulders above all the competition in the sprints with no Cavendish or Greipel here. Is this true? Well, lets look at the other possible contenders here. There's an angry Nacer Bouhanni for FDJ who is looking to find a new contract after FDJ have quite clearly indicated that their future lies with Arnaud Demare. Bouhanni besides being fast is a scrappy guy who should find the traditionally messy Giro sprints more to his liking than the order-loving Kittel I would think but of course he doesn't have the raw power of the German. Then there's the obviously in-form Elia Viviani who warmed up by kicking Cav's ass a few times in Turkey which probably did wonders for his self confidence and the confidence of his teammates. Frankly he looks like Cannondale's best shot at a good Giro showing at this point. Moser is an unknown and Basso is........well we all know what Basso will do at this point which normally isn't much even if he generally looks good not doing it. Third threat is Orica's Michael Matthews. Solid in the Vuelta, you have to think that he will be a serious player here after the spring he's had. Probably not as fast as the other three straight up in a sprint but add a little complexity to the finish and it's a different ballgame. Plus orica don't have much else to spend their time on after the TTT but set up Bling. It could get interesting.

Tyler Farrar, Roberto Ferrari, Edvald Boasson  Hagen, Alessandro Petacchi, Sonny Colbrelli, Manuel Belletti Davide Appolonio and a bunch more should probably be involved as well but those are the type of riders that will need a bit of a fluke day to take on the likes of Kittel. Still, I'm going to go out on a limb and say that Kittel doesn't dominate as much as been suggested. Two stage wins feels like a likely haul for him. There's no way he does the last few sprints either. I can't imagine Giant-Shimano think it's a good idea to haul him over the last week mountains if they want to keep him strong for the Tour de France.

As for the Maglia Rossa, the points competition, I'll leave the calculation of those chances to someone less sane than myself. Trying to figure out who has a chance at that thing takes more insight into the loopy and ludicrous than trying to figure out what goes on inside Johnny Hoogerland's mind. So let's leave that mess for later. For now, let's just enjoy Northern Ireland and the fact that the race is on. And to thoroughly enjoy the Giro you really need a good beverage selection to go with it, it wouldn't be Italy without it. Here to help us is amybc.

Wines of the Giro

Rather than engage in a likely to be fruitless search for Irish wine, for the Giro's opening weekend, why not try some whiskey? I naively assumed that I would have no problem finding bottles made along the daily routes. Instead, I discovered, thanks to Serious Eats and several whiskey salespeople, that there are only ten distilleries either operating or under construction, but that two of the ten aren't open yet, and three have whiskey stocks not sufficiently aged for sale. So I opted for as close as possible, which meant skipping a few highly recommended bottles. As always, price is also a consideration, which means no $100 bottles.

So what are we drinking?

Stage 1: Michael Collins, because how could I resist a bottle with a bike on the label? Made at the Cooley Distillery, so at least northernish. The smokiest of the three. Spoiler: I'll be making a cocktail with this one.

Stage 2: Bushmills 10-Year. I had planned this one for the opener, but a quick glance at the map of the second stage shows that they will be riding by on Saturday. Made at what is probably the oldest distillery in the world. Fruity and easy to sip.

Stage 3: Honestly, I should probably just be drinking a Guinness.  Instead, Tyrconnell, also made at Cooley. The company website tells me that this is an historic brand, named after a horse that won a legendary race at odds of 100 to 1. That seems sprint stage appropriate.

Tasting notes and my rambling daily race recaps are always available at http://winebookgirl.blogspot.com/. I'll also link in the threads here when I publish them.

Whiskey? Scarponi-face is skeptical. Don't worry Miki, it's only for a short time before we fly back to Italy. 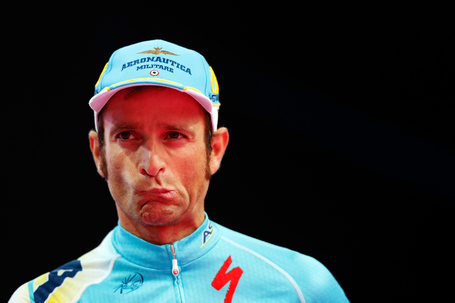