A convincing effort landed 37 year old Canadian Svein Tuft in the pink leaders jersey after the team timetrial. It was an expected win for Orica - Greenedge but in the end their longtime TTT-rivals Omega Pharma Quickstep came within just 5 seconds of the winners. Biggest loser of the day was Garmin-Sharp who lost their Irish captain Dan Martin to a horrific crash that brought down 4 of the teams 9 riders.

Share All sharing options for: Orica triumphs - Heartbreak for Garmin

The 22 km race took place in slightly varying conditions as the rain was on and off during the race. Winners Orica had dry roads for at least the first half while getting rained on toward the end. Second and third placed OPQS and BMC faced wet roads that gradually dried up toward the end. Some of the teams of the bigger favorites Quintana and Rodriguez may have suffered some from riding the whole way in the rain. In the end the shifts shouldn't have had a huge impact on the result. 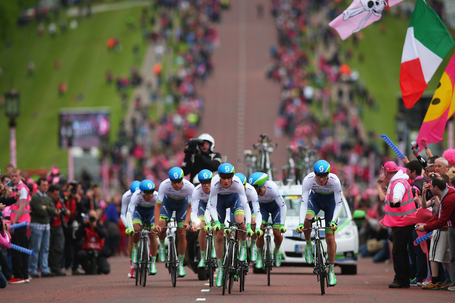 Orica were clearly set to dominate this day. No one had brought a team of as many specialists and strongest of them all might be the race leader Tuft. He has been one of the main engines in the impressive team timetrial results that Orica have had in the last seasons so it was only fitting that he should reap the rewards, especially as it is his 37th birthday today. Behind the aussies both OPQS and BMC rode impressively to protect the chances of Rigoberto Uran and Cadel Evans respectively. The two are usually strong in the TTTs but were without some of their best riders for the event today and still did well. It highlights the fact that the event is one that favors the teams that take it seriously and work on it continuously. 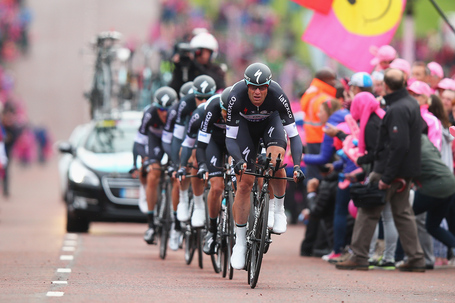 Omega Pharma on their way to challenge for the win

For another traditionally strong TTT team the day was nothing short of disastrous. Garmin-Sharp were on their way to a decent result when their GC leader Dan Martin slipped on a manhole cover, crashed hard and brought down the four behind him in a nasty crash. Martin was quickly recognizable as a non-finisher as he sat by the roadside grabbing his shoulder in a manner that indicated a broken collarbone but the disaster didn't end there. With only four riders  still on their bikes it meant that their second GC hope Ryder Hesjedal was also losing his chances as the badly hurt crashvictims struggled to pick themselves off the road to continue. In the end the team finished with five riders 3:26 down on the winners. With that Hesjedal will be reduced to stagehunting to save his Giro. For the team as a whole the setback will be hard to shake off mentally and thats even before we know how badly injured the crashed riders are.

As for the general classification the day was rough on Katusha's Joaquim Rodriguez as well even if it was far from a disaster. He finds himself almost 1:30 behind the best of the day, Uran and Evans while Quintana is 38 seconds ahead. Otherwise the timegaps should not make a huge impact. Domenico Pozzovivo probably thanked his Ag2r team for a solid effort as he sits comfortably in the middle of the field of GC hopefuls.

Tomorrow sees the sprinters take center stage as the peloton does a loop along the coast of Northern Ireland before (most likely) finishing in a sprint in Belfast. Tuft will most likely have to surrender his Maglia Rosa but Orica might be hoping to keep it within the team.