The North Star Grand Prix (formerly the Nature Valley Grand Prix) kicks off in Minnesota tomorrow and some of America’s top men and women cyclist are lining up to contest what is considered the most prestigious race on the USA Cycling National Racing Calendar.

Share All sharing options for: North Star Grand Prix: pros and amateurs looking for glory at NRC's most prestigious race

The North Star Grand Prix (formerly the Nature Valley Grand Prix) kicks off in Minnesota tomorrow and some of America’s top men and women cyclist are lining up to contest what is considered the most prestigious race on the USA Cycling National Racing Calendar.

The women’s race promises to be a great battle as former Grand Prix champions Carmen Small (Specialized-Lululemon) and Amber Neben (FCS Cycling) take on a strong field of women, including 2013 runner up Jade Wilcoxson (Optum) and UnitedHealthcare’s Alison Powers and Lauren Tamayo.

The race starts Wednesday, June 11 with the morning time trial route along Saint Paul’s Mississippi River Boulevard and an evening criterium surrounding downtown’s Rice Park. It continues with a road race in and around Cannon Falls on June 12, followed by an evening criterium in the Uptown neighborhood of Minneapolis on Friday. Teams then travel east to Menomonie, Wisconsin, on Saturday for the Menomonie Road Race. The race culminates on Sunday, June 15, with the Stillwater Criterium, which includes a brutal 24-percent-grade climb up Chilkoot Hill, the most difficult climb in North American cycling.

OPTUm will be sending two Grand Prix veterans; Jade Wilcoxson and Brianna Walle. Wilcoxson, the 2013 US Pro Road Race Champion, came into last year’s Stillwater Crit wearing the yellow jersey with a one second lead over Shelley Olds. She crashed in the final corner of the final lap of the race, and placed second in the Grand Prix. Walle won Top Amateur jersey in 2012.

A new team for 2014, UnitedHealthcare will be bringing three strong competitors, all veterans of the Grand Prix; Lauren Tamayo, the 2012 Olympic Silver Medalist, Cari Higgins, the 2012 and 2013 MN Fixed Gear Classic women’s champion and Alison Powers, an all-arounder who won the 2013 US Pro Criterium as well as the 2014 US Pro Road Race and Time Trial Championships.

North Star Grand Prix is a great event for new pro riders and ambitious amateurs to participate in a high level of bike racing. Anna Grace Christiansen, last year’s Top Amateur winner, is one of those riders.

After a break-out year in 2013, Christiansen has been given some guest riding opportunities with teams like Specialized-Lululemon and FCS Cycling.

At North Star, she’ll be riding with Specialized-Lululemon, with whom she rode the Tour of California criterium.

"Kristy Scrymgeour gave me the opportunity to visit their team camp last January in San Luis Obispo, CA. The riders on the team are so impressive and strong and they have really good attitudes," Christiansen said. "They are truly professionals and I am very grateful for the opportunities Kristy has offered me and I will be racing my legs off for the team this week and loving every bit of it."

And like preparing to race with a world-class team isn’t enough, Christiansen is bringing a team of her own to North Star, made up of amateur riders from the Pacific Northwest who , Christiansen says, have a real chance a taking the Top Amateur spot. 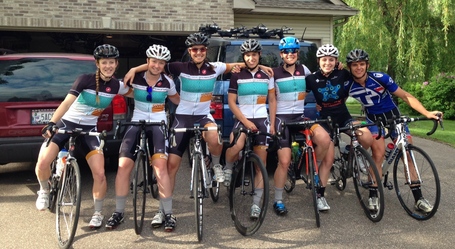 "[Team Presented By Let’s Race Bikes (PBLRB)]  started with a tiny idea to put together a composite team for NSGP. There is a bit of a standing tradition of [Pacific Northwest] women qualifying for the NVPC and going on to race well at NVGP and, in many cases, bringing home the Top Amateur Jersey. I knew there were a lot of Portland women who were targeting this race as a season goal and I wanted to use what little knowledge and experience I gained last year to make their journey to NRC level racing a little smoother," said Christiansen.

The "tiny idea" morphed into the big project of sending a community-supported, composite Elite team to race at the top level.

"If you’re a local rider going well at regional races and want to try your hand at an NRC level race, it can seem like a daunting task. Racing at the top national level presents both a financial and logistical puzzle.  The goal of PBLRB is to take those puzzles away and give riders full support so they can focus on racing their bikes and not stress about the details," Christiansen said.

"The riders were chosen based on who was racing a lot locally, who was really passionate about road racing, and who seemed ready for the next level. NSGP is a very difficult race on many levels. We also invited riders who we think are great advocates of PNW cycling who will represent the Oregon and Washington cycling communities well in Minnesota," said Christiansen. "All the PBLRB riders are very strong and smart racers. I think they each have a good chance of doing well at NSGP."

With her ‘project’ coming to fruition at North Star, Christiansen admits she may be a little nervous but is mostly excited.

"All of the pieces are in place and I am extremely excited to see it all come together. I’m so grateful to the riders, support crew, and collaborators for being 100% on board with the idea, it is absolutely a true team effort," she said. "I have all the confidence that [the team] will race with heart and represent the Pacific Northwest well. I am very happy to be able to give a little back to the sport and community that has already given me so much."

Christiansen herself meanwhile will be racing "her legs off" for Specialized-Lululemon before heading to Cascade Cycling Classic in July with team FCS Cycling team.

"Cascade will most likely be my last race of the season besides some stuff close to home, unless a team needs a good workhorse for a later season race!" she said.

We’ll be keeping an eye on Christiansen and the women of PBLRB and you can, too! Follow all the North Star on Facebook.