As the Critérium du Dauphiné heats up, don't forget that this Saturday, the nine stage Tour de Wiggo Suisse begins.

The Tour de Suisse is of course, along with the Dauphiné, a big Tour de France preparation race.  So it's a star studded field:  Wiggins, Martin, Cavendish, Sagan, Evans, etc.

Television:  This is a fun weekend for cycling fans, with the Critérium du Dauphiné and the Tour de Suisse overlapping.   On Saturday, don't miss the Dauphiné queen stage -- which has a better Swiss uphill finish than anything in the Tour de Suisse.

Eurosport will televise the Tour de Suisse (although, I am not sure about stage one).  As usual, steephill.tv will have other viewing options listed - see here.

I know, I know, most of you want to talk about Wiggins and Froome. So feel free to use the comments to complain about Sky, Froome, or Sir Bradley.  And, as usual, tell us who your VDS fantasy team is sending to Switzerland.  Me?You heard it here first:  Thibaut Pinot will surprise us all and win.

Thoughts on the Route?

I think it's balanced.  Not too crazy, but not too easy either.  Unlike a couple of Tour de Suisse routes in the past decade where organisers forgot where the Alps were located. This year: the only gigantic mountains are early on during stage 2.  And the three uphill finishes are not terribly tough. But the Time Trials are certainly not flat.  The mid-mountain stages have the potential to be explosive, and the sprinters will likely only have two chances for victory.

Let's take a quick look at each stage:

A 9.4 kilometre Time Trial.  With 2 kms at roughly 7.5%, is this route just a little too hilly for TT power-house Tony Martin?

The stage takes place in Bellinzona, the capital of the Italian-speaking canton (province) of Ticino. It's known for its three Castles (UNESCO World Heritage sites).

Big, big mountains.  This literally passes over the Alps. But is the finish too far from the summits of these monsters? Will the peloton race this stage or just agree to survive? I don't know. But I do know that from a cyclotourist point of view, this is a dream.

From the route map, it seems they will climb the road directly beside the famous cobbled Tremola, one of the more amazing stretches of road in the Alps, on the way up to the St. Gotthard Pass. Next, they will climb the side of Furkapass where a sniper almost killed James Bond in Goldfinger. Near the summit of Furkapass is the Rhône glacier. Here starts the Rhône river: the melting ice runs through Switzerland, into France, all the way to the Mediterranean. The hairpin-filled road down Furkapass then up the easier side of Grimselpass is a beauty to behold.

The view from Grimselpass looking towards Furkapass: 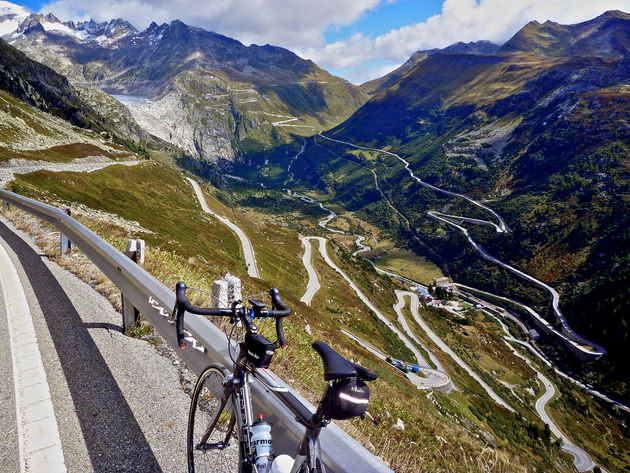 The descent down Grimsel is long and fast.  David Millar made a comment a few years back in a previous Tour de Suisse about the craziness of descending 90 kms / hour through unlit tunnels (or something to that affect).

I'll stop drooling at the route and admit that we probably won't see much of it on TV, and they may be wasted bumps. But it is difficult to imagine any pure sprinters being able to hang onto to contest the finish.

A bumpy stage fully in German speaking Switzerland, north of the Alps.  A day for a break away win while the GC contenders look at each other?

The finish town of Heiden is at the very north-east tip of Switzerland, near Lake Constance and the German and Austrian borders (Far from me).

Mark Cavendish and his gruppetto buddies will have been waiting for this stage.  For Switzerland, this is flat.

The finish town, Ossingen, is the home town of the legendary Swiss rider Ferdy Kübler - one of cycling's true greats. His long list of victories includes the World Road Race, the Tour de France, three Tour de Suisse, among many others. At 94 years of age, wikipedia helpfully notes that he is retired from professional cycling. 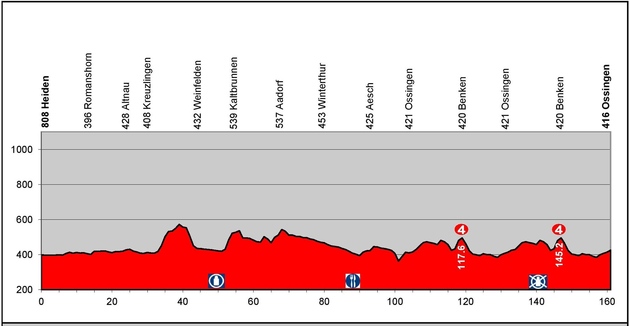 Another opportunity for the sprinters.

This stage runs through much of the German speaking part of the Swiss Plateau - the "relatively" flat part of Switzerland where most inhabitants live - squeezed between the Jura mountains to the north and the Alps to the south.

This stage heads north into the Jura mountains.  The route will pass through the finish town of Délémont (capital of the canton of Jura) 42 kilometres from the finish and then loop back again.  They speak French and make watches here.

This looks like a perfect stage for a large and early break-away.  I fear the later stretches of the stage will require some math, as the peloton calculates when (and if) to reel the break back in. A Sagan stage?

Held in Worb, the official Tour de Suisse site kindly informs us that the town is most famous for a 1954 comedy sketch - "The quickest way to Worb." Youtube link (German).  German speakers:  Let us know if this is funny 60 years later.

Hmmm, I suppose this is the perfect place for a youtube link to the official Tour de Suisse theme song - here.  If you would like to sing along, the words and a fancier version (without dancing though) are here.

Yes, of course, this is the mandatory stage where the route passes by UCI headquarters in Aigle. The stage will start in the Juras, cross the Swiss Plateau, touch the tip of Lac Léman (aka: Lake Geneva), and head back into the Alps, with a familiar uphill finish at Verbier.

Verbier was famously(?) the site of the only stage victory of my long, and lousy career.  In 2008, I finished a good three hours before Kirchen: 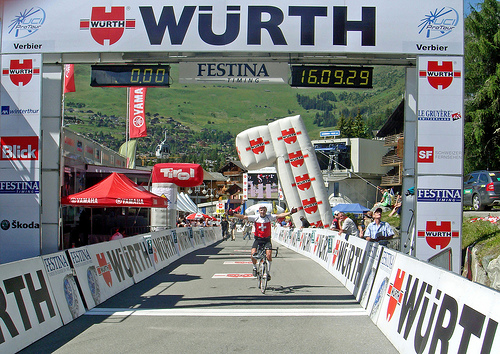 Now is when I do my standard rant that the best part of the climb is above the town of Verbier.  I felt too silly to call this a mountain top finish.  More of a mountain side finish.  Rant over.

This won't be the toughest climb, but there will be opportunities to attack. In fact, there is a commemorative sign 5.5 kilometres from the finish, marking the spot where Contador attacked in 2009.  I can see a break staying a way while the GC contenders mark each other until exactly ....  5.5 kms to the finish.

Oooooooo.  This is a nice final stage.  The route rides through the sunny micro-climate of the canton of Valais.  But while we start in French-speaking Valais, we finish in Germain-speaking Wallis (it's the same canton).

Down low in the Valais, there are lots of fruit and dairy farms.  But it is the also biggest wine producing region in Switzerland. Amy is the Podium Cafe wine expert, but I quite like a good Valais "Fendant."

Of course, the other big industry here is tourism. And the final climb heads due south into the Alps on the road that leads to Zermatt and the Matterhorn.  But it soon turns off into a different valley up to the medium-sized ski resort of Saas-Fee.  It is a long finishing climb, but not the steepest, with the last 20 kilometres averaging roughly 6%.  There are a few kilometres in the 7-8% range but several inside the final 10 kms are not much more than false flats. However, from 3.5 kms out, it does get tougher, although almost flattening out for the last few hundred metres.

For the cyclostourists:  It is possible to go much higher here on a road bike.  Skip the last turn off to Saas-Fee and continue up to the giant hydro-electric dam at the beautiful Mattmark See.

This is a tough, beautiful final stage. Lets hope the GC is still up for grabs, like In 2004, when Jan Ullrich won the Tour de Suisse by a single second

As I said at the start, I give the course a B.  It definitely has the potential for a some lively and exciting stages - and of course there will be beautiful views of the Swiss country-side throughout.

Who is your favourite?  Will Wiggins be on a mission to prove he deserves a Tour de France place?  Will Cavendish search for an airport after stage 5? Will Sagan dominate the mid-mountain stages? Who are the other favourites?  Predictions welcome. 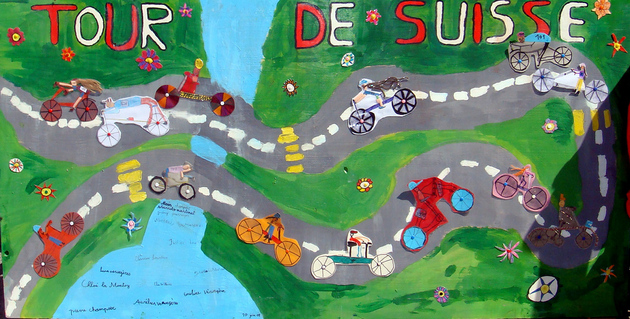