All the talk was about Froome vs. Contador but a wild and anarchic final stage saw Garmin's Andrew Talansky go on an early big offensive and as Froome faltered and Contador fought in vain to catch him, the 25 year old American held on to win the race overall. Mikel Nieve saved an otherwise disastrous day for Sky by taking the stage win.

Share All sharing options for: Talansky takes shock win in the Dauphiné

It was the kind of stage you almost don't believe will happen anymore in today's controlled cycling. It seemed a straightforward enough plotline. Tinkoff had to hold off Sky and Froome an stop him from getting 10 seconds on Contador. The stage profile wasn't too daunting and the final climb didn't look like it would wreak much havoc. And then..... chaos happens. A huge early break formed and it was an incredibly strong break of 23 riders. Riders high on GC like Talansky, Kelderman, van den Broeck and Bardet had company with top Sky and Astana helpers and were allowed to gain 2-3 minutes. How that happened remains to be seen but presumably Tinkoff having Froome as their main focus played a role?

At a point Tinkoff tried to reduce the gap to the leaders but instead a counterattack went with Sky's remaining helpers driving Froome up the road with only a few strong riders managing to latch on to the chase. Contador , Nibali and Kelderman were all isolated with a strong Sky contingent which also had more resources up in the break.

The break on it's part was driven by Ag2r, who had helpers for Bardet, and Garmin's Hesjedal working for Talansky and despite whatever shenanigans going on behind they held their advantage of 2-3 minutes. It wasn't until after Froome made attempts to shake off Contador only to suffer a devastating counterattack by the race leader that the gap began to come down. At that point a group of Astanas, led by Nibali, and Wilco Kelderman had been allowed to wander off from the Froome group without the Sky riders doing much to reel them back. So the situation on the road was chaotic to say the least. Up front Talansky, Bardet and Van den Broeck were driving the pace to keep their time advantage and GC gains. Nibali and Kelderman were in-between and from the back Contador was furiously chasing to catch them all and to open a gap on a rapidly collapsing Froome behind.

Contador made big early gains and looked to be methodically reeling in Talansky who was the virtual Yellow Jersey on the road but eventually he started to run out of steam slightly. When Van den Broeck set the pace the gap held and went up and Contador only ever got within 20 seconds from Talansky on overall time. By the time he crossed the line he was 27 seconds behind Talansky on GC even though Talansky looked to be struggling at the end as he had to see riders ride away from him for the stagewin. Mikel Nieve was the first and strongest attacker and he took the stage win ahead of Bardet and Orica's Adam Yates who once again proved his stageracing talent. Froome limped in five minutes later, thereby dropping out of the top 10 overall. Not the kind of dressrehearsal we have come to expect from Sky captains 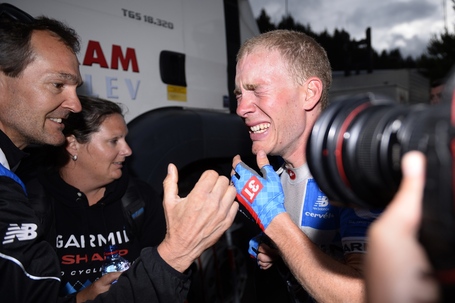 Overcome by emotion at the finish. Photo: LIONEL BONAVENTURE/AFP/Getty Images

This was Talansky's biggest result to date, with two second places in Paris-Nice and Romandie being top of his palmares before today. Once again he and Garmin proved that they can take big results through unconventional aggressive riding. Today they played brilliantly on the staring contest between Sky and Tinkoff to put themselves in a golden position. Once the reaction came from the big opponents it was too late and they paid the price for underestimating the competition. Suddenly Talansky looked like the major US stagerace hope as Tejay van Garderen keeps looking to be struggling to live up to expectations. In a few weeks we'll see if this pattern holds as the two are both set to lead their teams at the Tour de France