And if it's already Wednesday, then Fabian Cancellara is the Swiss time trial champ.

Nats week is always a challenge to the bloggerly inclined. For one, National Championships are organized by national federations who are not as accustomed to publicizing their races online as effectively as, say, ASO. Secondly, it's easy to start -- Belgium! Netherlands!! FRANCE!!! -- but it's hard to know when to stop.

We at the Cafe will be tracking the big events as they unfold. Sure, the World Cup has distracted some of us away from the Polish time trial championships, not that there was live video to begin with, dagnammit. We will comprehensively track the final results, even if we might not have much more to say besides who won, in our usual place: SuperTed's amazing FSA DS Machine!

I'm going to start the previews here, but invite y'all to add more to either this post (Jens, Douglas) or to a new post, as you see fit. Together, we can do this! Power to the People!

I know... but hey, it's always fun, and the information is easy to locate compared to some.

Site: Wielsbeke. What percentage of Flemish towns sound like they could have been named after the bicycle? A lot, I'm sure. Anyway, this is West Flanders. Flat country. 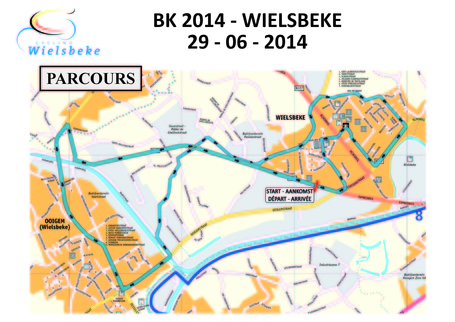 Two-dimensional maps aren't terribly descriptive, but little-known fact: much of West Flanders is in fact two-dimensional! I did a little Google Earth walking and quickly determined that this is a board-flat course. The confirmation comes from the list of street names, none of which have "berg" in them. So, look at the map, imagine a fairly endless string of road furniture, and bam! You've got your BK (Belgische kampioenschaap) parcours.

So who got this? Ah, well now it gets a tad more intriguing. The conversation always starts with Tom Boonen, but he went home from the Tour de Suisse after suffering some discomfort in his hip and knee from a crash a week earlier. Beyond King Tom, the website doesn't have a startlist ready. Not that it matters much, since it's Flanders and the odds are that attacks will be plentiful, so there's no point in handicapping a bunch sprint that is unlikely to ever happen. Philippe Gilbert will be mentioned plenty, if he's in attendance, as will his teammate Greg Van Avermaet. Both can count on a few trade teammates, if the Lotto and Quick Step machines don't take over completely.