Site: Ootmarsum, a village in the far northeast of the country that looks like something I studied in art history. Seriously, what does it take to become Dutch? Just asking.

Course Map: These are possibly the two best parcours graphics I've ever seen. First, the route, inspired by a Playmobil village: 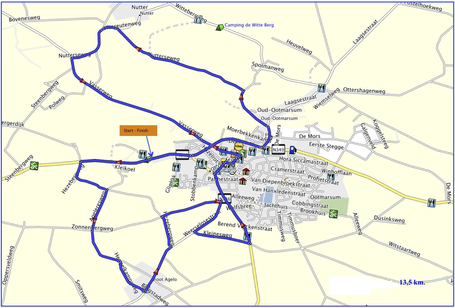 Next, the dreaded profile. 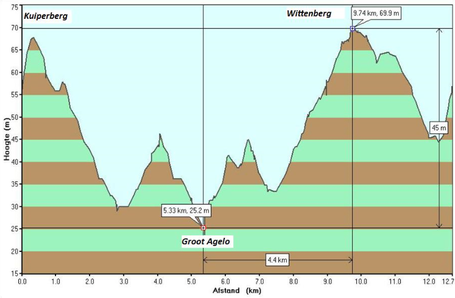 Those top altitudes are meters, while the X axis is in KM. In other words, that horrible stretch from km9 to 10 you gain... 15 meters. But hey, who's counting? The sprinters, that's who.

Less silly is the fact that the course is neither particularly flat nor straight. It weaves and bobs just enough for most of the circuit, sometimes over all-too-tidy cobblestones, to make things interesting. Sure, the pure climbers won't benefit, but they're Dutch, they knew what they were getting into.

So Who Got This? The startlist is pretty packed. My hunch is that the sprinters won't necessarily go away unless the race is aggressive enough, and hey, is that Niki Terpstra entrance music I hear?? [Happy, by Pharrell Williams.] So yeah, a lot can happen. Belkin will be working as a team (cough), what with twenty riders taking the start, including Moreno Hofland who is ideal for such a course. Theo Bos, the nation's winningest rider, tends to excel in less selective events, but he's there anyway. So are sprinters like Kenny van Hummel and the van Poppels. Tom Dumoulin, the crono champion, is probably not someone to take your eye off of, but then a lot of guys fit that powerful non-sprinter role.

Site: Baunatal, smack in the center of the country. I know bubkis about Germany, really. Might have something to do with their tendency to hate on cycling.

No, the Website: Took me a while. You're welcome. What the site lacks in typical(ly comical) profile graphics, it more than makes up for with a GoPro moto video recon, featuring some awesome German techno.

That was fantastic. As you can see, it rolls very gently, and threatens riders more with road furniture than gradients.

So Who Got This? Hm, no clue. Does anyone know the German word for "startlist"? If you do, please inform us as to whether Kittel, Degenkolb or Greipel are in attendance. My guess is yes to all three, and Kittel would come in as the favorite. Tony Martin is there and apparently won the time trial. And if this isn't his start music, then I just don't know anymore.

Site: Futuroscope, a theme park about the future as it was charmingly envisioned in 1987. It's located near Poitiers in the Poiteau-Charentes region, just south of the Vendee. 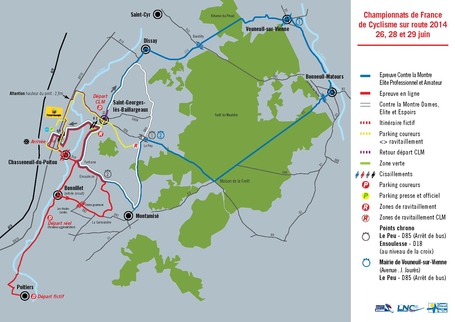 My horse sense tells me that this is yet another modestly rolling course, finishing in the river valley which virtually guarantees a flat section there.

So Who Got This? Startlist time. So maybe I am wrong about the sprint possibility, since Arnaud Demare and Nacer Bouhanni are both skipping the event. Chava? Voeckler? Those would be the usual suspects, but the challenges can come from any number of riders.

Site: Male and Fondo, in the Trentino foothills below the Dolomites. Gibo territory.

No, the Website: Gazzetta has the details. That saves me 15 minutes trying to track down the national federation site. Your basic Italian up-and-down-all-day thing. The details aren't super sharp, but it appears to gain a couple hundred meters in the final stage. So yeah, climbers. Maybe a climber with a finishing kick.

So Who Got This? As we know, Diego Ulissi's not gonna be there, which sucks for him because he and his inhaler would be a lock on this course. Here's your mega-startlist. Nibali is the big name, and yeah maybe, but I can think of others. Sonny Colbrelli has a hot hand. Oscar Gatto is good at this stuff. Moreno Moser has a donut to eat. [That's FSA DS talk there.] Enrico Gasparotto has the chops for this, if Nibali isn't up for it.

Site: Ponferrada, making this a preview and dress rehearsal for the World Championships. I wonder who that favors?

No, the Website: Um sure. Want to read the entire roadbook? I can't find the simplified version.

Course Map: I had to make my own, but whatevs. It's not a complete beast of a course, which means that you might get a number of guys coming to the line together, provided they can climb, which includes 90% of Spanish riders.

So Who Got This? Well, Valverde seems to be in good form after a time trial win. In fact, it's fair to say that a coronation may be going on. Sprint after some climbs? No problemo.