Giro Rosa Stage 8 - mountains and rain on the Queen Stage

The penultimate stage of the women's Grand Tour was 90.3km and ended with a huge climb up to San Domenico di Varzo - 1,000m over 13km, with an average gradient of 8%, but some much steeper sections. This really would tell us who the best climber in the women's peloton is! We'll add the videos, blogs and links as they come - and please do share anything you've liked in the comments!

Share All sharing options for: Giro Rosa Stage 8 - mountains and rain on the Queen Stage

Race highlights, with interviews - including Mara Abbott and Emma Pooley in English

Hour-long highlights, with most of the full final climb in it: 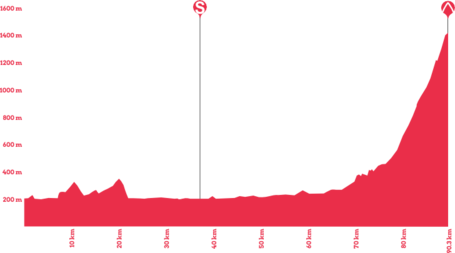 Profile from Velofocus - read his preview of the stage

The first part of the race was very fast - the fastest first hour of the whole race, according to ORICA-AIS director Gene Bates -  with teams and riders trying to get away, but the GC teams were not taking any chances, and it all came down to that final climb.  Up through the cobbled section, the peloton crowding into the narrow roads, with Trixi Worrack (Specialized-lululemon) attacking early on - and you know that's a strong threat when all of Rabo-Liv get on the front to stop her getting away!  Even after they'd neutralised that threat, they stayed massed on the front, with riders like Lucinda Brand working herself into the ground on her turn, to drop as many riders as possible, so that by 10km to go, there were around 16 riders in front, with all the big threats - maglia rosa Marianne Vos and her Rabo team-mates Anna van der Breggen, Pauline Ferrand-Prévot and Annemiek van Vleuten, who'd won the prologue and Stage 3; local girl Elisa Longo Borghini and her Hitec team-mate Ashleigh Moolman-Pasio; defending champion Mara Abbott (UnitedHeathcare) and fellow Americans Evelyn Stevens (Specialized) and Megan Guarnier (Boels-Dolmans); No. 1 in the UCI rankings Emma Johansson (ORICA-AIS); another former winner, Claudia Lichtenberg, née Häusler (Liv-Shimano);   Tetyana Riabchenko (Michela Fanini), who kept attacking, dropping and clawing back; and Stage 6 winner Emma Pooley.

The rain was coming down and the road kept going up - decorated with bikes in gardens and in the trees, ELISA written on the roads to celebrate the local heroine.  Various riders tried attacking - Stevens and Riabchenko both had a go, but they couldn't escape, and it whittled the group down to 10, and then 7 - Vos, Van der Breggen and Ferrand-Prévot from Rabo, Abbott, Guarnier, Longo Borghini and Pooley.  Although Johansson, Lichtenberg and Van Vleuten re-captured them for a while, the climb was just too brutal, and attacks from Pooley, Abbott, and Ferrand-Prévot brought it down to 7 again - these were the contenders, all but Pooley in the top 10 of the GC.

The final attack that worked was Guarnier, who put in a huge "do or die" attempt with less than 6km to go - it was a gorgeous move, and only Van der Breggen could catch her, and there were two races at the front - between the pair and with the chase trying to reach them, Pooley upping the speed and looking like she was out for a pootle to the shops while the others struggled - you couldn't really tell from her riding that she'd accelerated, just from the reactions of the others.

Just before the 4km to go mark, Van der Breggen dropped Guarnier, and behind her Pooley was leading, with Longo Borghini falling off the back.  The gap to the leader was dropping metre by metre, and it was all about attempts to attack - and then Vos cracked, visibly fading as she hung right over the handlebars, pushing herself on by will-power, as her legs were clearly wanting to give up.  Then at 2k to go, Ferrand-Prévot was dropped - and Abbott and Pooley caught Van der Breggen, dropping her just after they entered the final kilometre, and the road got steeper.

It was now a duel - and we haven't seen an Abbott-Pooley duel for years, but it's familiar from 2010, when they battled all the way through the Grand Tours - the Pyreannean Tour de l'Aude, which Pooley won, and the Giro in it's old incarnation as the Giro Donne, won by Abbott.  The lack of real climbing races in the women's peloton, and both riders taking time out at different times (Abbott because of her eating disorders, Pooley to finish her PhD) means we've never had the chance since then to really see them go head to head....  who would win?

No matter how Abbott tried to shake Pooley, she couldn't manage it - and it came down to the last 200m, when Pooley just seemed to speed up, and Abbott couldn't match her - Pooley crossing the line with a yell, no energy even to celebrate!  Here's what she said about it for the Lotto-Belisol website:

"I didn't really attack I just rode harder. It wasn't a sprint at the end, just by raising the pace I apparently had created a gap. I didn't even put my hands in the air, because I was sure she was coming so I didn't have time for that. This victory is really nice for me and the team."

What a beautiful day, starting with this view from the turbo &topped by a #GiroRosa14 stage for @LB_Ladies ... (1/2) pic.twitter.com/AQGQGnJEtC

Pooley had won Stage 6 after escaping early and then again on the climb and Time Trlalling home, but this definitely proved it - despite a terrible start to this race, losing all her GC time after racing Stage 1 with a huge nosebleed, she's most definitely back on top!  Her second Giro stage of the race, and third of her career - pretty damn good second half!

Emma, fifth-placed Megan Guarnier and first-time Giro rider Hannah Barnes all answered some questions for us at the Café after the stage - click through and read what they had to say 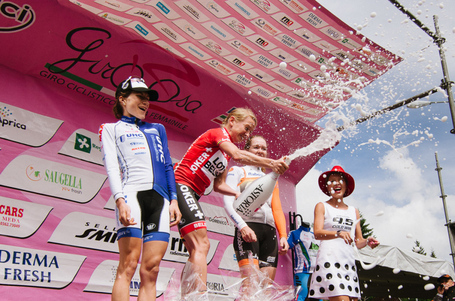 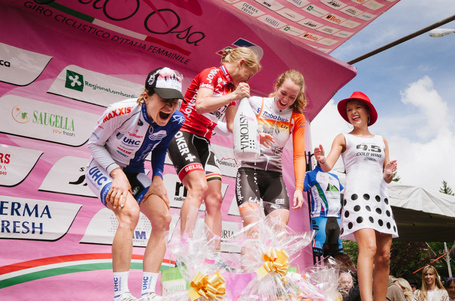 Pooley on the podium - she's not so good with the huge prosecco!  Photos from Velofocos' great Stage 8 gallery - click through to see them all!

Wonder why Pooley won?  She's not Wiggle Honda, but they interviewed her after she won! 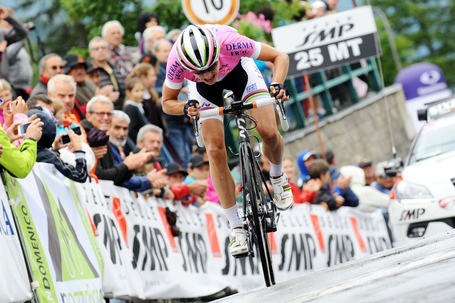 Vos had worked incredibly hard to try to limit her losses as much as she could - and actually lost less time to Abbott this year than last - that was 1:36 over the same climb, although they had ridden the enormous climb the day before back then.  Guarnier had battled with her right to the end - and it was intriguing seeing who had gained time - Emma Johansson, for example.  Longo Borghini crossed the line in 11th, to huge cheers, 2:11 back, dropping down on GC

Even if I'm not the strongest yet, I love mountains, I love my area and I love my friends.

So many "FORZA ELISA" today. Thanks for cheering for me, I didn't expect so much warmth! I really got emotional. #grazie

and the GC was changed again.

How are Rabo-Liv feeling about that result? Vos, Van der Breggen and Ferrand-Prévot tell us in English:

and their video in Dutch

The big question is will tomorrow's final stage being about rivals like Abbott and Longo Borghini making a last-ditch effort to crack the Rabo domination - or will the biggest competition for the maglia rosa come from Vos' team-mates?  It's going to be fascinating, and it's another hilly parcours.  The shortest road stage yet, at 80k, with another uphill finish, the famous Madonna del Ghisallo climb, but it's shorter and not as high - around 500m over around 10k, and while the early stages of the climb gets up to 14%, it eases, with a recovery section and descent before the final climb - so while the start suits Pooley, Abbott and Van der Breggen, there are plenty of chances for Vos to recover and come back.  Can't wait!  Here's Velofocus' stage profile, from his excellent preview: 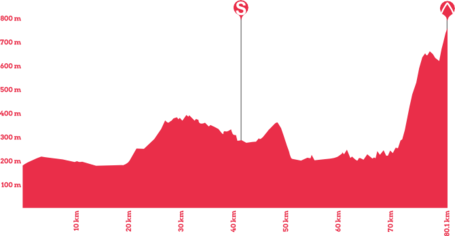 There a great description of the climb on Inrng's blog about it, including the history and the little chapel dedicated to the Madonna of Cyclists at the top - including this profile

So what will happen?  What are your bets, and what do you WANT to see?  Let's talk in the comments, and then chat through the stage as they ride it.  One more day - and it really feels like anything could happen!

Superb photos of the stage from Velofocus -  blogs about the day from Tiffany Cromwell on CyclingTips and Chloe Hosking on her blog.  And Stage 8 had obviously got to the Wiggle Honda staff...  here's their great video!