The final stage of the 2014 Giro Rosa, and the shortest road stage at 80km, with everything - including the General Classification - coming down to the famous last climb, the "Madonna del Ghisallo". True, the top three on GC were all Rabobank-Liv - Marianne Vos in the maglia rosa, with Pauline Ferrand-Prévot just 17" behind her, and Anna van der Breggen at 1:16 - but their rivals were hovering, mountain goat and 2-times Giro winner Mara Abbott at 1:39, and the very clever Elisa Longo Borghini at 1:46. Then there were all the riders out of GC looking for glory.... it was going to be exciting racing, to match the gorgeous stage! And is that a whiff of polemica to discuss in the comments?

Share All sharing options for: A good day for Hat-tricks - Giro Rosa 2014 Stage 9

It was one of those great women's cycling days, when the first attack came less than 5km after the start, with Astana-BePink pair Dalia Muccioli and Simona Frapporti going all "death or gladioli", and once they were caught, a flurry of attacks, including ORICA-AIS' Amanda Spratt. UnitedHealthcare were definitely going for that GC win, pushing on the front - and all the Rabobanks too, of course, with Vos and Ferrand-Prévot leaving nothing to chance by scooping up the additional intermediate sprint bonifications ahead of Liv-Shimano's Amy Pieters

The pace around Lake Como just got faster and faster, especially through the tunnels - and if you want to know about this part of the race, you definitely should read the blogs about the stage from Tiffany Cromwell, on CyclingTips, and Chloe Hosking, on Cyclingnews - and this beautifully evocative blog about riding the Ghisallo climb by Marijn de Vries -  it sounds so fast and furious, so that by the time they reached 15k to go, there were only 25 riders left in front...  and then Rabo's tactics changed up a gear.

Their young climber and first year pro, Kasia Niewiodoma lauched herself off at the start of the climb, taking everyone by surprise, and forcing a chase, because she really can climb!  It was one of those moments of admiration for the mountain domestiques who burn themselves out of the hills, because behind her Sharon Laws was doing everything she could to drag Abbott up to Niewiadoma's wheel before blowing up (she and Niewiadoma then having to suffer up the remaining 10k of the climb - does satisfaction at a job well done help the pain?).

Niewiadoma's attack did her job - only 9 riders left to contest the stage:  Mara Abbott and Emma Pooley, who duelled right to the finish on the Queen stage; 2009 winner Claudia Lichtenberg, née Häusler; another American climber, Megan Guarnier; Elisa Longo Borghini... and 4 Rabos, Annemiek van Vleuten, Pauline Ferrand-Prévot, Anna van der Breggen, and of course, Marianne Vos.  What are crazy-strong group, all but Pooley in the GC top 10!  Both Vos and Abbott had won the Giro twice and wanted a third time - Vos and Pooley are both former World Champions, Pooley in ITT and Vos in road, cyclocross AND track, and of course Pooley has an Olympic silver, and Vos two Olympics golds - while PFP was junior World Champ on Road, ITT and MTB....  All of the race jerseys - of course Vos, but PFP in the Best Young Rider white, AvV in the sprint jersey, Pooley in the green mountains and ELB in best Italian; Pooley, Longo Borghini, Van Vleuten, Ferrand-Prévot and Vos all riders who have won World Cup races, with AvV and Vos both having won the series - I could go on...  it was all talent, all the way.

Now it was time to whittle that group further, and there were all kind of digs, especially from Abbott and Pooley, but Ferrand-Prévot and Van der Breggen raced shoulder-to-shoulder, and kept on the front as the road curved and twisted higher above the lake.  Rabo were completely in control, despite losing Van Vleuten, and Lichtenberg following her - and then it was time for Emma Pooley to make her move - with her very characteristic style of riding, pushing up the pace and opening a gap that was hard to close.  The chase back to her shed Guarnier and Longo Borghini, while Ferrand-Prévot closed the gap, and then, one of the decisive moments of the climb - pulling so close to Pooley's back wheel, but driving her group on the other side of the road, making it clear to Abbott, that she wasn't going to drag across to Pooley - did Abbott want to?

Abbott didn't, or couldn't - and Pooley made the decision for her, by going again, getting up out of the saddle and tapping away, super-fast, making the acceleration look easy, and she was gone.

Now it was all about psychological warfare, Ferrand-Prévot and Van der Breggen playing mindgames with Abbott, while Vos just had to suffer and hold on.  Ferrand-Prévot had eyes everywhere, so if it looked like Abbott was going to try to get away, she'd swing the group across the road, making it clear Abbott had to get around her.  Superb team-work, or unfair tactics?  There's been a fun debate or two on twitter, and I lean to "great tactics", because it didn't look like Abbott was being boxed in, she just couldn't get round - but watch for yourself, and tell us what you think in the comments!

As the climb flattened, Pooley shifted into the ITT mode that won her Stage 6, moving into that special Pooley cadence - pushing hard on the descent section because she knew this was where the Rabos could make up time on her.  At 4k to go, she only had a 12" lead, but she benefited not only from her huge ITT power, but also from her Stage 1 disasters leaving her unthreatening to the GC.  Her gap started growing as she steamed through the flat section, and at 2k to go it was up to 45", and the way she's been climbing this race, the final ascent wouldn't stop that.

The "recovery" section may not have stopped Pooley, but it did allow Guarnier, Longo Borghini, Lichtenberg, and Van Vleuten to catch the chasing four.... just as the road went uphill, and Van der Breggen hit the front for her last serious climb. The last kilometre was full of hairpins, climbing high up the Lake, with gorgeous views and people on every corner, the roadside filling with more and more cheering fans as they neared the top.  If Pooley had looked down, she could have seen her competition, but she was 100% focused, pushing on.

Lichtenberg tried one last bid for glory in the last kilometre, but she couldn't shake the Rabos - and then Pooley was in the last long finishing straight, with time to wave to the crowds, as the bells of the chapel rang her home - her third victory in this year's Tour de France Giro, in the third different style - escaping early and holding off the chase over a 20km descent and run-in on Stage 6, duelling up to the top of the mountain on Stage 8, and now in solo break.  She told us yeterday that her confidence was low after the Emakumeen Bira and the awful race start, but she can't think any of this was a fluke, now - sealing her hold on the climber's jersey!

UPDATE! I interviewed Pooley about how her race went, who she really wanted to win Stage 8, how she learned to love descending and much more.  You'll be able to listen to it on my blog, or you can read it right here.

Behind Pooley, it was fighting all the way to the finish, with Ferrand-Prévot attacking at the end, and crossing arm-in-arm with Vos, both of them delighted, and another hat-trick, as Vos won her third maglia rosa 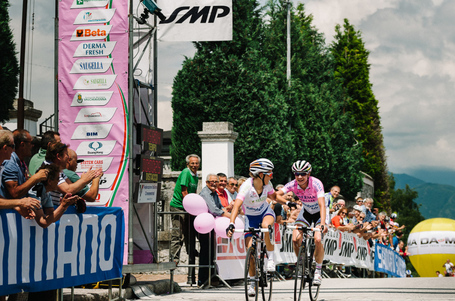 Rabobank-Liv had raced not only the stage, but the entire race, with smart team-work, going in with three GC contenders in Vos, Ferrand-Prévot and Van der Breggen - with Van Vleuten proving that yes, her leg problems have been fixed, and getting back to her amazing 2011 form after a couple of years of operations and disappointments.  AvV's prologue win wasn't a surprise, she's a prologue specialist, but her Stage 3 win was all about clever racing, and her top 10 placing in the mountain stages means she's definitely ok.  And it's not just those four - day after day Niewiadoma, Iris Slappendel, Roxane Knetemann and Lucinda Brand attacked and worked and fought.

Finished my first Giro at 11place! Amazing week with my@RaboLiv Ladies and Staff! I'm so glad to be part of this team pic.twitter.com/EnSRLO5NO4

Because we've lost so many climbing races in the last few years, we haven't had the chance to see how Ferrand-Prévot and Van der Breggen can really climb against the best.  Of course PFP's Flèche Wallonne World Cup win showed us what she can do on steep, hard climbs, but this was different, and I'm longing for the old Emakumeen Bira days of uphill ITTs and the Giro Trentino's old Alpine stages - not to mention the late lamented Tour de l'Aude Pyreannean Grand Tour, so we could see Pooley and Abbott duel, with the young Rabos having more chances to show us what they can do.

And then there's Marianne Vos... she rode race so well, chasing stage wins for the glory and taking four stages out of 10 - Stage 1's crazy hill hilly circuit stage where she took the maglia rosa, Stage 4 and Stage 5's bunch sprint (even if Stage 4 was by accident!) and the long hard drag-race on Stage 7 - fighting not just for the glory, but also for the bonifications they brought her - around a minute of her final lead over Abbott came from podium places.  She is such the perfect all-round rider - and while she was suffering brutally on the long climb yesterday, she was killing herself to limit any losses - while at the same time making it very, very clear if she lost too much time, she'd be more than happy for any of her team-mates to take the jersey from her shoulders.  Devastating!

How did Rabo feel after the stage?

Rabo Dutch video from the stage, including all the jersey wearers visiting the chapel at the top of the climb

and here's Vos talking in the press conference after the stage

Huge thanks to all the Giro Rosa team for all their work, especially on the social media - and as always to our live tweeters, Boels-Dolmans and Rabobank's Richie Steege and Sem Versteeg, and Hitec Products boss Karl Lima.  It was luxury to have so much tv, too - thanks to RAI Sport 2 and Rabo and Wiggle for their videos. Here's the final Wiggle video, with a bit of Last Day madness...

Behind the scenes with Rabo

So we'll be adding all the videos we find to the comments, but a question for my annual "highlights" posts - what's been your best thing from this year's Giro?  Add your favourite things to the comments, or tell me on Twitter!