Remember the race we talked about at the start in Yorkshire? Forget that. That race is dead, this is another race. With both the protagonists in what we assumed would be the duel for the win gone, the dynamic of the race is irrevocably altered. So what is the 2014 Tour de France 2.0 ?

Being a cycling pundit is hard. People have spent the better part of a year building up the big rematch between Froome and Contador as the big fight. Especially after Contador seemed to be on an upward trajectory all year while the Sky captain struggled to live up to his flawless and dominant 2013. So what to do when neither of these jokers manage to stay upright long enough to even contest the first mountaintop finish? Time to rethink obviously.

This is how we ranked and rated the favourites ten stages ago, doe-eyed and naive:

Now clearly this was all based based on the assumption that Froome and Conta would be head and shoulders above the others . Behind, perhaps Nibali coming somewhat close to matching them if he managed to find the GT-winning form that had eluded him all season and Valverde fighting him for third if he could manage three weeks without putting his foot in it at some point. Further down we'd see the usual slow struggle of near-contenders riding conservatively to maintain precious top 10 placings, some of them with higher hopes of a longshot place on the podium than others. That dynamic is all gone now and we're left with a whole new scenario.

Clearly even before Froome decided to break every bone in his arms and  Contador went pothole-spelunking we could see that Nibali would be more of a contender in this race than anticipated. His cobbles gain and obvious authority in the opening stages showed he was here to play. Suddenly now he is catapulted into the same position of "nearly unbeatable" as we saw Froome in from the first climb last year. His nearest rivals are two and a half minute down and didn't look anywhere near threatening on Belles Filles. Several of the near rivals have had a tough opening week as well. Mollema has had illness and is four minutes down, both Talansky and Tejay have hit the deck and suffered as a result. Talansky is out of the top 5 discussion of course after the stage 10 disaster while van Garderen is looking fairly comfy 3.56 down. Equal to, or better than Nibali in the TT he now "only" has to rediscover his climbing form of a few years ago and prove that his latest TdF attempts have been abnormalities. If he does then suddenly he is maybe the podium contender his paycheck indicates?

The mere fact that Nibali's closest rivals at the moment are all riders we've had some pretty serious doubts about highlights just how much of a golden seat the Astana captain is in. Richie Porte has looked like crap all year since he got sick at Tirreno so it's hard to stay confident about his ability to fill Froome's shoes. He's one of the few here though who look capable of taking significant time in the timetrial but to get there in a good position he still has to overcome his penchant for jours sans and hope that his basic form will hold up even if his prep this year has been sketchy at best. None of us know though how well he has gone in training since he elected not to start the Giro. His Dauphine was lackluster  but that might not mean anything?  Valverde on the other hand has had an excellent lead-in to the event and the only one teensy weensy thing he has against him is that he is always slightly crap in the Tour. He keps saying he's going to do better than ever and then somehow it always goes pearshaped anyway. If by some miracle of modern science he manages to put together three focused weeks he could actually win the damn thing. Is anyone betting any money on it? No? Monopoly money then?

And then there is the French factor.
We now have three, yes three, competent Frenchmen in the top ten. On the upside they have all gotten this far with less issues than everyone else in the top except for Nibali, on the downside two of them are barely old enough to even drink the victory champagne should they get so far. Still it's an exciting prospect with two strong young climbers so near the top. Oddly enough Bardet looks the most dependable one of the two after the hype of 2012 and the depths of despair in last years TdF where Pinot's sudden attack of descendophobia sent him out of the race with his TdF-stocks plummeting to an all-time low. How is anyone going to win the Tour with a questionable timetrial and an ability to go downhill slower than you go uphill? It can't be done. So we still have to see if he has put that angst behind him and can be as aggressive in the mountains as we thought in 2012. If he can then the Pyrenées could get mighty interesting. Bardet on the other hand looks like the likely slow slider in this top ten. He might not collapse but it feels likely that he will slowly and certainly lose time in the final week and then there is the small matter of 54 kms of timetrial on stage 20 that will cost the little dude more than most. Along the ride for the slow backwards slide is probably Rui Costa. The World Champ has ridden well under the radar but he too feels just a size too small for what is to come.

What kind of race are we in for?
So yes, Vincenzo Nibali is in a super position right now. Let's just get that established before anything else. The race is his to lose, no one else here has his stageracing pedigree and everyone we thought was well above him in capacity is at home in a cast at this point.
But, and it's a big but, behind him are a pack of riders with a set of opportunities before them that they never thought they'd have. If the respect for Froome & Contador was big enough to inspire the rest to aim for respectable lower placings, Nibali does not  hold that elevated a position. The race has already shown itself to be brutal to race favorites and Nibali is not that dominant to begin with. If there is even a hint of weakness shown from the Astana camp, there are now a pack of riders that can smell a perhaps once in a lifetime opportunity to win a Tour de France. If that doesn't inspire some offensive riding then I don't know what will? 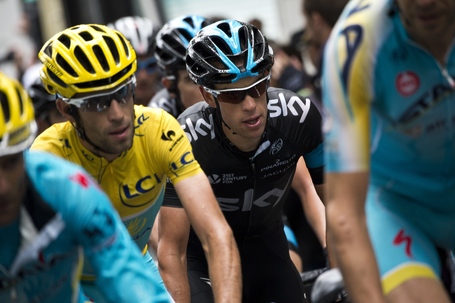 To begin with Sky will definitely have a go . They may end up riding for lower placings in the end but after 2012-13 there is no point for them sitting still and hope Porte ends on the podium. They don't even have to take that much time in reality. If Porte is within a minute of Nibali going into the TT there is no telling the outcome. There isn't really much basis to make comparisons from between the two. Porte has rarely done the long TTs with only his own GC in mind but the general feeling is that while Nibali is solid, Porte has an extra gear if needed. In 2012 when Nibali ended third and obviously went full gas, Porte beat him in the final long 52 km TT by 1:13 though. And that was when he had been hauling Wiggins around for three weeks, so if I were Astana I'd be very weary of giving up any time to the Australian in the mountains.

In the end the race will really be decided by the opponents ability to crack Nibali definitively. Just gaining a little time here and there is really only an option for Sky. The others need to put the Shark in crisis and it's not really the easiest thing in the world, he is a bit badger-like in his ability to hang on and ride just within his limit to stay close in touch with attackers without blowing up.  His undoing might be the sheer number of opponents though? While Astana look strong they do have a bit of a dilemma in that there are several riders within 4-5 minutes and it isn't entirely easy to say which of them pose the greater threat. At some point they may be forced to either gamble on letting people go or tire themselves out controlling everything but it really depends on whether people take the opportunity to ride offensively. If people are happy to ride along and hope that they will outlast their opponents and climb the GC then Astana have already won this. Unfortunately that is what we often see in the Tour. A Talansky and Garmin within striking distance might have been worth gold at this point but who knows, maybe their willingness to throw the race into chaos might still become a factor.