Le Tour Stage 11: Another Day For The Break?

Share All sharing options for: Le Tour Stage 11: Another Day For The Break? 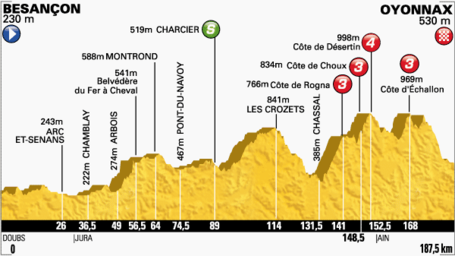 A few lumps, but nothing that should cause problems back in the bunch. The final categorized climb is three kilometers and change at 6.6%, and then there's a gradual looking descent to the line. So without any GC racing on the table, what's in store?

These are the sort of stages that breakaway artists and roulers love. It looks like a perfect chance for a biggish group to get up the road and fight out the stage win honors amongst themselves some ten minutes ahead of the peloton. That is, if it weren't for Peter Sagan not having won a stage yet. After a remarkable seven stages in a row where the green jersey wearer made it into the top five but did not win, a certain Slovakian rider is mighty hungry for a win finally. So, expect Cannondale to keep the break on a short leash and then to ramp up the pace in the last fifty kilometers to make sure Greipel, Kittel, and company get dropped to give their wheelie master an armchair run to the line.

My pick? Sagan is the easy one, but it's also the kind of stage that eats into legs enough to let Orica's Michael Albasini do some smashing of his own. I bet he jumps from early and takes whoever he's with by surprise. He's a sneaky one, that Michael.