Share All sharing options for: Le Tour Stage 12: Can Sagan Finally Win It?

Another transition stage, and another one with the hills back loaded towards the end of the stage. Well, the Col des Brosses and Côte de Grammond don't look nearly as serious as their profiles suggest. The Brosses is 15 kilometers at 3.3% and the Grammond is a shade under 10 kilometers at 2.9%. Hardly the stuff of legends. Then again, the Brosses does look steep in parts, though the Tour website won't give us any climb profiles (which may suggest enough about how difficult they are not...). Anyway, 20km from the final climb to the line spells "just enough time for a sprinter or two to catch back on" to me. 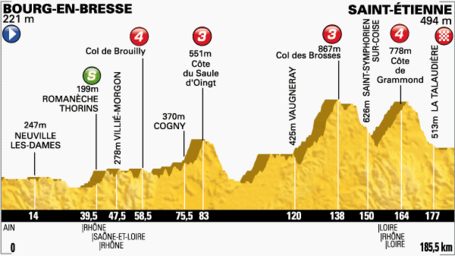 Really, the rouleurs must be hating Peter Sagan now, because if Cannondale doesn't keep things together and inject some serious pace on the final two climbs, I'll eat a pile of dirty socks. But what happens then? Does Sagan follow the inevitable attacks, or does Cannondale finally keep a rider in reserve to help close things down and make sure he's looked after in a reduced group sprint?

My bet is Cannondale is pretty wiped by the top of the Grammond and a few Giant-Shimano boys start winding it up for Degenkolb. He's quite able to get over these kind of lumps and his prior injuries to his posterior seem to have healed just fine, as evidenced by the second place he took behind a solo Tony Gallopin today. Sorry Peter, I'm not giving you this one. But, Simon Gerrans and a few other guys probably have their eyes on this stage, so it should be an interesting sprint to watch with climbing sprinters and sprinting climbers duking it out. Hell, Valverde might even give it a run in the sprint if the group is small enough.