This has been a remarkable Tour in certain respects:

All of those will come to a halt tomorrow, at least to the extent that nobody thinks of Sagan when it comes to this: 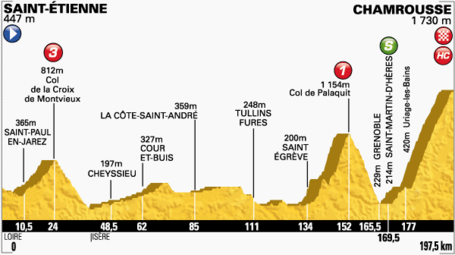 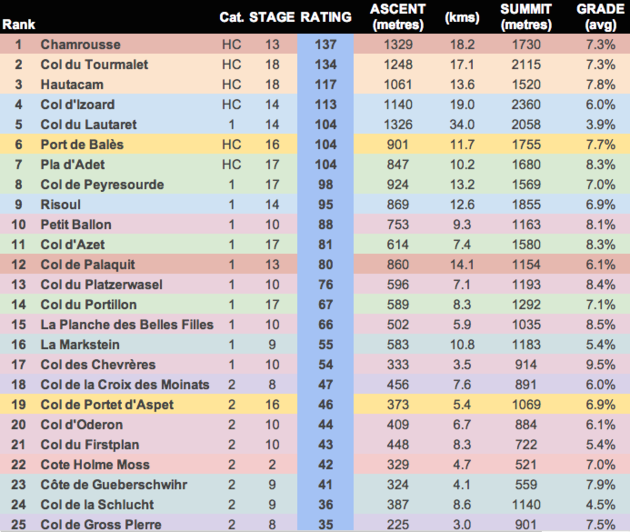 See that top line? The Chamrousse climb, which is the MTF and main attraction tomorrow, is the #1 rated climb of the entire Tour de France! That sounds awesome and scary until you re-read WillJ's mountains preview where he rates it "even my weak legs have never thought of it as particularly difficult (relative to its many neighbours)." Translated into American, it's crap (relative to its many neighbors). [Also, let's give a big Podium Cafe welcome to the Col de Palaquit, making its Tour debut. Welcome!

Anyway, now would be a good time for our annual reminder: the riders, not the road, make the race. If they wanted to, the peloton could make a hard race across the surface of a ham sandwich. [I just like saying ham sandwich.] Racing is entirely relative, so while the famous neighboring climbs might make fans' imaginations soar, Chamrousse will present the GC riders with more than enough chances to do battle, should they so choose.

So will they so choose? I am guessing yes. Saturday's stage is more traditional, including the Col d'Izoard, which serves as the Souvenir Henri Desgranges (highest climb) and one where Italian Tour winners are required to attack, if history tells us anything. But depending on riders' tastes, some or all of them may see a better chance on the Chamrousse, coming after a less daunting approach, and Sunday is a downhill stage, meaning there's no concern about emptying the tank too early (compared to a three-stage Alps fest, where you might want to take it a bit easy at first).

My pick to win? Bauke Mollema. He sits far enough back such that Nibali might not want to cover his every move. And he used the words "good legs" in interviews this week, which is either a good sign or a major blunder in a sport which has taken sandbagging to such an art form.

It wouldn't be a Tour without a Chasselas as they head up the Alps. The producer is on Lake Leman, right across from Switzerland, on a gentle slope facing the lake, in the small village of Marcorens. Both complex and fresh. It is another one of those bottles that makes me wish we could more easily get Swiss wine in the US. I think I might like it.