The Alps may be low on quantity in the Tour this year but there are no complaints about the quality on this one. Three major climbs, one of the the mighty Col d'Izoard where the peloton will stop briefly to shop for Henri Desgrange souvenirs.  After the opening salvos on Chamrousse, today is when even bigger differences can be made. 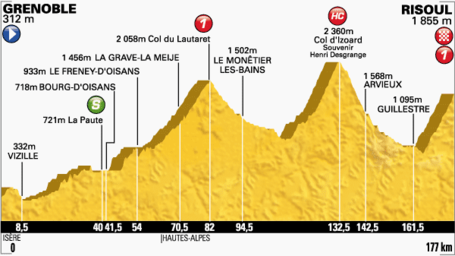 It's a classic Alps profile, it offers just two modes: climbing steeply upward or flying down a descent. It appears they've taunted the riders by putting in a 12 meters or so flat section around the intermediate sprint which comes after just 40 km though. This is obviously an evil way to make sure the sprinter teams make the first hour of racing hell as they will try and shut down all the escape attempts. After that they will call gruppetto and "enjoy" the rest of the day off the back off the race.

At this point we're in Bourg d'Oisans and the riders will probably be wishing that the race would go up to Alpe d'Huez and end the suffering there but this time they are not lucky enough to get away so easy. Instead they go up 40 km to the Col de Lautaret which will serve as warmup for the famous Izoard, playground to Fausto Coppi back in the day. This will be the hardest climb of the day and followed by a long descent to the bottom of the final climb up to the ski resort Risoul. This is an even climb on a wide and unspectacular road. No crazy gradients but every opportunity to make a difference for the superior climbers. The Izoard will be the provider of beauty for the day, Risoul will be all about racing and the Tour might actually be decided here whether it will be by another shark-show or something else. 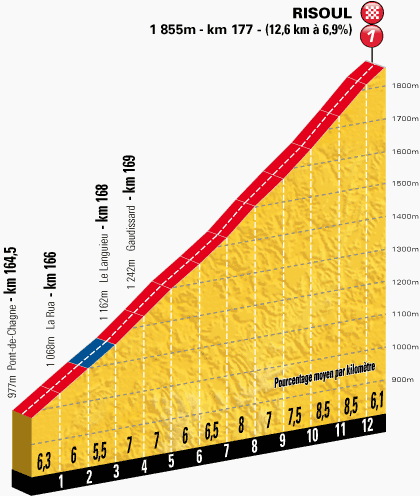 This stage has chaos-potential written all over it. If there are any left who want to roll the dice and make a big play for the GC  and there will be, today might be the day to do it. We could see a brutal start to the stage with Astana struggling to maintain control all the way. We'll see if the close fight for the podium places will inspire attacking riding or if the contenders will be content to wait each other out. If so we'll get another dragrace like the one up to Chamrousse.

My pick to win: Thibaut Pinot

One way to shake of pesky spaniards glued to your backwheel is to attack and attack hard. If anyone looks like he would be willing and also able to make it stick it's Pinot at this point.