Le Tour Stage 15: Back to the Bunch Sprints

Let's just keep predicting a Sagan victory, and delighting in finding out who pips him this time.

Share All sharing options for: Le Tour Stage 15: Back to the Bunch Sprints

Quite possibly the most boring and predictable stage of the Tour, except for one factor... lousy weather. The profile: 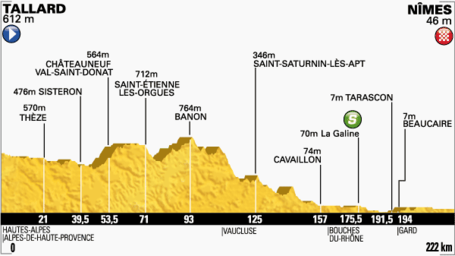 It's a long one, but downhill, which means anyone and everyone will be admitted to the finale. It's also the last stage before the last rest day, and when the Tour resumes it's all mountains to Paris (not literally). So you can count on Giant-Shimano doing its share of the work, or perhaps Cannondale being honswoggled into helping, in their never-ending quest to score Peter Sagan a stage.

Sagan will be the talk of the Tour Sunday... namely, who will beat him this time? Sagan has made absolutely no secret of his boredom with the Green Jersey; stage victories are what he wants. Sure, green is great, but you don't get to do a little dance or wheelie or whatever when you cross the line with an impressive haul of points. Only the stage winner gets to do that, and if that isn't you, then you get to pound your bars or yell at the guy who cut you off, or otherwise project misery instantaneously across the planet. Sure, maybe you think about getting fresh with the podium gals as they award you your ten thousandth green jersey, but ultimately you don't have the energy.

Wearing green means that people will ask you inconvenient questions, particularly "why didn't you win that stage?" Chances are there are about 180 guys who also didn't win the stage, to say nothing of the journalists or the internet forum people or even that bossy prick Bernard Hinault. None of them won anything today, so why should they get to tell you what to do? Why don't they go bother everyone else? It's simple: because people can't stop confusing the green jersey with "best sprinter," and maybe neither can you. It really *is* the best sprinters' jersey, and you're the best sprinter, except you can't seem to win a stage. Even Kristoff beat you, and he couldn't find the front end of a sprint with a GPS. None of it makes any sense.

So you go back to your hotel, eat shitty pasta, and hide out from all the people who are bothering you. Tomorrow you will win. They'll see. Then maybe they'll ask you about all your hard work and all the training for the classics which cut into your training for bunch sprints and which left you pretty exhausted to begin with. They'll also probably start asking you about your next contract, but don't say anything about that. Not if you want to get paid.

Anyway... back to the stage. Weather could be a distinct factor, since rain is predicted with some certainty in the Alps (as I write this at least). The course map shows a reasonably straight procession away from the mountains, with just a few jogs left and right. The road gets twistier later on, but if the showers are confined to the hills, perhaps the latter portion of the stage won't be terribly wet. Given the tendency of stages exiting the mountains to start off a bit lethargic anyway, perhaps the weather won't really affect anything. But after the first week, forgive us if we're a bit skittish about such forebodings.

Château Lascaux is situated in the south of France between Montpellier and Nîmes in the foothills of the Cevennes. It has been in the Cavalier family since the 12th Century, for thirteen generations. Fresh, bright, fruity but balanced with some minerals. So easy to drink. I tend to drink rosé year round here in San Francisco (hello, cool summers and warm falls) but for those in warmer climates, buy this and drink it all summer.