Just when you thought this Tour couldn't get any sweeter for Vincenzo Nibali the organizers throw a downhill finish his way. Because they're just that nice.

Three very different stages in the Pyrénées kick off with a doozy. The longest stage in this year's race at 237.5 km it's going to be a rough introduction to the Pyrénées for those who have bad post-restday legs. The climbing gets gradually worse all day too, they warm up with a couple of cat 4s and then moves up to 2s and 3s only to end with the nasty HC Port de Balès. The cat 2 climb is the easier side of Portet d'Aspet which also means they'll do the difficult descent that claimed the life of Fabio Casartelli in 1995. 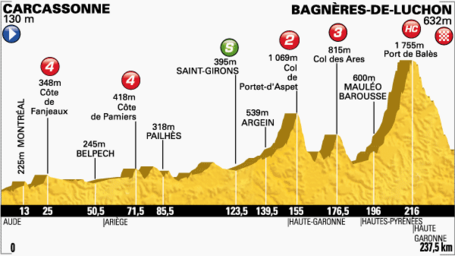 Port de Balès has been a regular feature in the last decade after the small remote road was first repaved for inclusion in the 2006 TdF. It remains one of the harder climbs the Tour choses to use and in this case it offers an evil twist. Twenty kilometers of descent from the summit to the finish in Bagnères de Luchon are going to pose a challenge for everyone in this twitchy field.  Our race leader is a famously excellent descender so presumably people won't be hoping to attack him here unless they're just plain stupid but the drama might lie further down the GC? Ag2r have already signaled their intent to test Thibaut Pinot's questionable descending skills and if there was ever a place to try and push home that advantage then this is it. With Nibali out of reasonable range the battle between the French kids (and old fart Peraud for that matter) is the main attraction right now. They look fairly even matched this year but if there is one possible majr difference between them it could be Pinot's descending if he hasn't solved the issue. He's looked fairly solid so far and his tactic of trying to "attack" to to be able to do the descents on his own terms on the front has looked like a winner. Knowing that Tejay van Garderen is a bit prone to issues on the descents as well could provide further incentive for Ag2r to try an offensive approach here too. The French riders need to drop the BMC captain decisively in the next three stages unless they want to see themselves passed in the final timetrial.

This stage looks like a slow burn. A good bet is that we get two races today, one among the breakaway for the stage win and another among the favorites as they wait until the Port de Balès to open up the hostilities. There are two harder stages than this coming up and one or two people are going to be too wary of the after-effects of the rest day to try anything bold here. So the fight to get in the breakaway today should be fierce. Especially when you look at the quality of riders who sit just outside the top 10 but still with big enough timegaps to not really prove a huge threat to the top 10 riders. Expect guys like Horner, Feillu, Kwiatkowski and Nieve to find their way into the break today along with the usual band of breakaway artists.

My pick for a winner: Mikel Nieve
The guy is basque, he's on a team that desperately needs something to cheer for after Plans A through G have failed and he could drop practically anyone in this field on the Port de Balès.