It's the one-piece companion guide to the race's entire history.

Title: The Complete Book of the Tour de France
Author: Feargal McKay
Publisher: Aurum Press
Year: 2014
Pages: 722
Order: Via Amazon
What it is: A year-by-year capsule of every edition of the Tour de France
Strengths: The top-line story-telling, the author's style, and the vertical narrative around doping.
Weaknesses: Top-line stories are only the beginning of the whole story of the world's most colorful race.

The explosion of books about cycling has been a delightful development for us at the Podium Cafe, for a number of reasons. First off, a lot of us are readers, and not too much beats reading about cycling. Secondly, the collective cycling bookshelf had a long way to go as of the turn of the millennium, at least if your preferred language was English. Now it doesn't. And finally, it launched the freelance writing career of Feargal McKay.

I can't say for sure what McKay was up to as a writer before he clued into the fact that my own efforts to catalogue cycling books for the Podium Cafe was running out of steam, but to say he took up the mantle is to say that Lewis and Clark went hiking one day. Over the past, oh, five years?, McKay has written over 300 articles for our book review project, the Cafe Bookshelf: mostly reviews, as well as author interviews for those occasions when it's time to go extra deep.

And deep is the key to describing McKay's work creating and curating what I believe is the World's best English-language collection of cycling book knowledge, the Cafe Bookshelf. McKay's reviews do what the genre's better works do -- go beyond the subject in some way that both engages the reader and illuminates the subject. I wouldn't characterize the style in any particular way, as his reviews don't fit into a formula, apart from that of demonstrating a great deal of research resulting in a great deal of information about the subject of the book, possibly on par with what you might have gotten from reading the book yourself.

Moreover, anyone who follows McKay on Twitter (@fmk_Rol) knows that he's opinionated and keen to expose the nonsense (doping, sponsorship, and daily dribbles) that often brings the sport down lower. His reviews carry forth in that spirit of courageousness that is fundamental to the art of the book review. From reading them I know that I'm too nice, or more accurately too disinclined to be critical, and have to fight that urge in order to deliver what a reviewer is supposed to deliver: a full and fair assessment of the subject matter. It's kind of bullshit really -- what good is a review that pulls punches? Since McKay took over, the integrity of the Cafe Bookshelf has risen steadily along with the volume of information.

All of this is to say that, as I write this review of McKay's first bound volume of work (as far as I know), I am not especially impartial. But McKay would appreciate nothing less than an honest review of his work. So here goes. 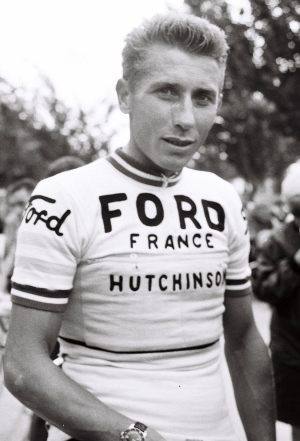 The Tour de France is sold to us as the biggest institution in the sport of cycling, but rarely is it mentioned that it owns that distinction almost by default. It's tempting to think of it like the Super Bowl or Christmas or the rising of the sun each day, as something completely inevitable and endowed upon mankind by the Gods of Cycling, forevermore. The reality is that it's the property of a media holding company and needs to feed on an ever-growing audience to sustain itself, and if it becomes disconnected from this lifeline it can, in fact, whither and die, just like any other race. Fans of our generation (by which I mean rapidly aging LeMond fans) can recall the recent brushes with death, particularly the 1998 Tour with its police raids and rider strikes. Older fans or students of the Tour's history will regale you with plenty of other potential torpedos, like rider deaths, rampant doping, rider deaths from rampant doping, and the whole bit where Henri Desgranges was completely insane and seemed bent on destroying cyclists, as if that somehow wasn't threatening to destroy cycling.

This is why this book is necessary -- if in fact it is. There are literally dozens of books about Le Tour, some of which function as big-picture surveys, emanating from the minds of beloved authors like Richard Moore, Les Woodland and the McGanns. Those are the entertaining narrative histories (and in Moore's case, with photos). On the other end of the spectrum might be something like Mapping Le Tour, a newly released effort to document the route of each Tour, with statistics and maybe a few words (I haven't seen it yet). Everyone looking for their comprehensive guide may have their own idea of how it should be packaged; The Complete Book falls in the middle, with a mix of narrative and facts. Take a gander: 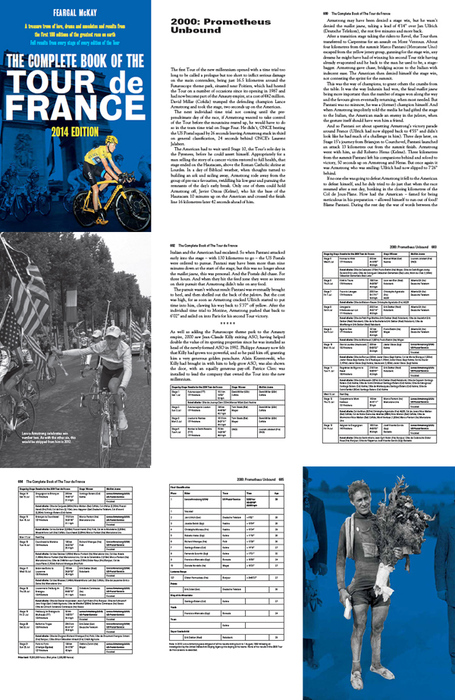 From the graphic you can see the format includes a story of the race, graphical cataloguing of each stage (including notable climbs), and final GC top ten plus other jersey winners. But back to my point: such a book is necessary because the story of the Tour is both the highlights and the lowlights that tell you the real story, warts and all. Each edition is a legendary grind, but so too is the evolution of the race, through thick and thin. The Tour is not a monolithic inevitability. It's a human creation, full of flaws and color, woven in both the stories of soaring victory and mundane failure. You need the whole history to fully appreciate this. That's why this book exists.

The best thing about the year-by-year format chosen for The Complete Guide is that you don't have to read it all, and since I got it I've used it in two different ways: to round up the story of the Italian champions, and to turn randomly to editions I've never given any thought to. Why was the 1927 edition interesting? [Because it launched Nicholas Frantz, whom I had literally never heard of, to two straight victories. Also the first nine stages were team time trials. Read that sentence again.] Each chapter answers the question, why was this edition interesting? All done in McKay's style, literate (the book opens with a quote from Fitzgerald) and sharp-toned with an air of let's-cut-to-the-chase.

The book, of course, runs into its natural limitations, which consist simply of not being able to provide the kind of depth you can get from, say, Étape, by Moore, which goes into detail (including years-later interviews) to tell the story of some of the Tour's most poignant moments. There you can feel just how colorful and fully human the story of the Tour is, not just the top-line story but the every-day evolution of the race. Stages themselves are so often loaded with personality that, if you want to soak in the Tour to that depth, something entirely different from McKay's quick run through history is required. McKay acknowledges this basic reality right away in the Introduction. The book bills itself as "the Essential Companion to the Greatest Cycling Race on Earth," but another way of putting it is a companion to the study of the Tour's history. The Complete Book is like a highway, and books like Étape or Slaying the Badger or Sex, Lies and Handlebar Tape are off-ramps. You can go barreling down the highway and come away with a pretty good feel for a place, but when you've achieved that and you're ready to really dive in deeper, well, choose some of the off-ramps.

The other main criticism of The Complete Book is that it may have been rushed out before the editing process was complete. If you want to pore over every detail, you can find minor things like sentences that should probably be truncated, or punctuation that's missing. Sometimes the story moves faster than it appears, like in the 1966 race when details of attacks across three stages are described like they're all part of one. A few years, like 2002, you get the feeling there wasn't much to say, at least from McKay's perspective, but considering how forgettable the 2002 Tour was, perhaps that's telling enough. Without knowing more, the 2014 reads like the first edition, with a future edition containing a bit more polish. To most readers, these details will barely register, if at all.

Finally, there's the subject of doping, which is interesting in its tawdry details, but the effect of reading about the regular updates spread throughout the book give it a vertical narrative that goes beyond the vision of a comprehensive catalogue. Sure, I like to jump around to random chapters, but doing so risks missing the presence of real storytelling, something McKay's long-time readers won't find surprising. This is a coherent book disguised as a reference guide.

Ultimately, the truly curious reader or Tour de France budding historian will be left wanting more than this book can deliver, taking cues from the chapters which lead them to other storytellings. Why? Because even these truncated tellings are enough to get hooked. For an overview of 100 years of history, you can't ask for much more in terms of entertainment, coherence, and the end result, feeling like you've come to really know this wonderful race.