Maverick was my Mum's favourite T.V show, She absolutely adored James Garner and it was with sadness that I noted his passing earlier this week. Wiki defines the word as 'an unbranded range animal' which perfectly sums me up on my roam across France. It is also the name of Apple's new computer operating system which has been the bane of my existence since it forced it's way on to my lap-top just before I left home last month. Trying to post on Podium Cafe using the old I-phone 5 is nigh on impossible, so up until now my promised Tour de France updates have been but a pipeline dream. Thankfully this morning one of Mr Gates' frequent OS updates have sorted the problem and I can now access wifi....yay!!!

No matter how much you plan and dream, following the Tour around France can be in the lap of the Gods and I must have upset them somehow. A broken bike and a rotten car set me back before the Tour actually started but I made it to the Grand Depart at Harewood House to wave them on their way. 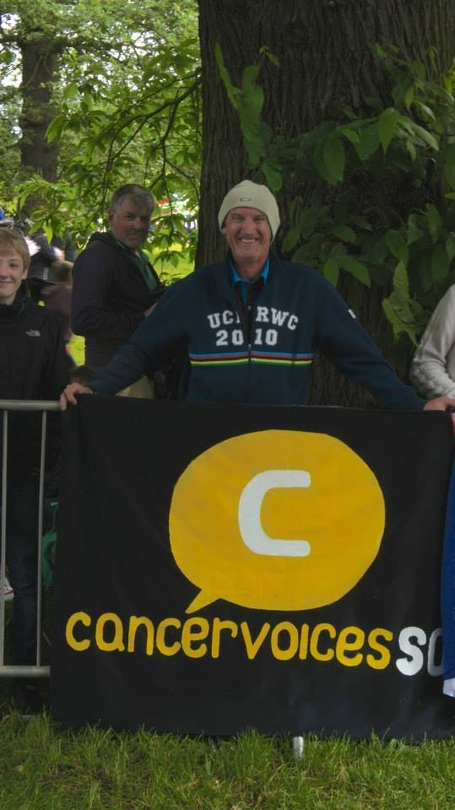 I had planned to be somewhere out on course for Stage 1 but a lack of bike made the plan unfeasible so I decided to head over to the Peak District to get a good spot for Stage 2 and camp the night. The road was closed at Holme Village just out of Holmfirth so that's where I camped but it was worth it. The crowds were amazing and so were the midges. 'It's OK. I'm not reacting to their bites' I said, and I didn't until around a day later when all of my exposed bits started to resemble a Polka-dot jersey. 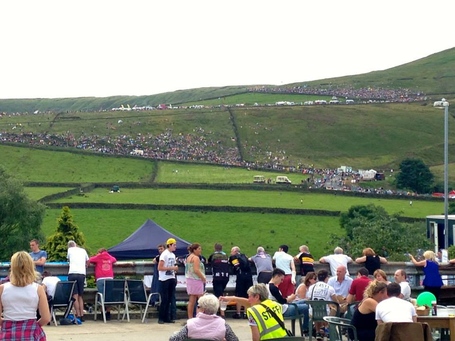 As soon as the Sag-wagon passed my viewing spot I packed up and started the Volvo with Cambridge as the desired destination....sadly the local constabulary had decided that the roads would remain closed until all of the pedestrian and cycle traffic had cleared so I went to the pub and watched the finish instead. Even after that the predicted time of egress was two hours away so after a couple of field crossings and gate openings I was on my way South.

The depart in Cambridge was chaotic but I managed to catch up and have a chat with some of the GreenEdge guys as they prepared for the off. I was booked on the ferry to France that afternoon to miss the rush which was a good job as a problem with the EuroTun meant a three hour traffic jam into Dover 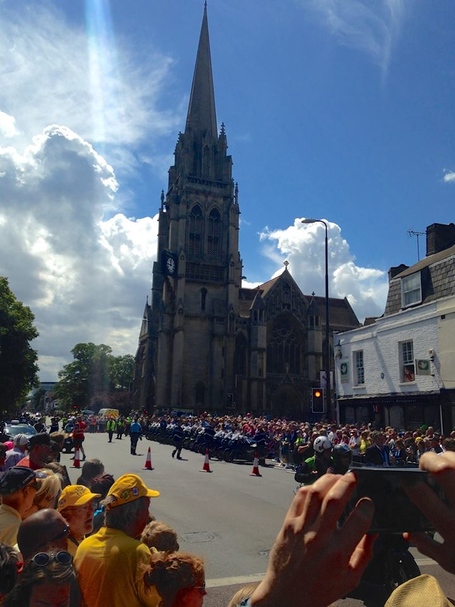 The rain started as soon as I crossed The Channel and didn't let up until I reached Lille. I don't know what had upset me but I found a sudden need to find relief...and if anyone has ever tried to find a public toilet in a French city they'd understand my unfortunate position. Not only that, by the time i'd finished my urgent business I was lost and couldn't find where i'd parked the car so my plans of reaching my Hotel in Villeneuve was dashed. I kid you not, I've never been so disoriented in my life and it took me a good two hours to find the Volvo. I made do with a spot about 6Km from the finish. I was disappointed, wet and feeling unwell and the spray from the Giant Shimano train drenched me even more but a thrown bottle from 'Turbo' Durbo and the GreenEdge car stopping to let me watch the finish on their in car cam made up for it.

I picked up my travelling mate Con at the Lille station the next morning and we headed for the cobbles to meet another mate. Rob who was lending me his spare bike. Once again the heavens opened and I still wasn't feeling my best but watching 180+ cyclists ride over this shit was one of the most thrilling experiences of my life. We didn't see Froome go through and a text from home told me why 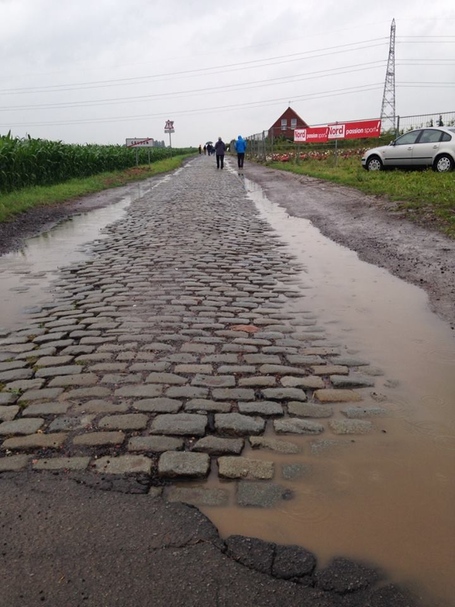 We made haste for the Ardennes with the hope of finding a decent wild camp but constant rain turned us soft and we made shelter in a Hotel. The rain eased by morning so the three amigos ventured out through fields of corn for a long ride. It was good to be out on a bike again. I heard that the mayor of Reims didn't show to present Andre Greipl his winners jersey that evening, after seeing the amount of Military cemeteries in the area I don't think he'd have lost many votes.

Gerardmer was next town on the itinerary. I was feeling better but that's where my technological problems began.. I wiped out 30 Euros of credit on my phone thanks to a change of video download etiquette on FaceBook and was unable to recharge using a 'foreign' credit card and my first attempt at a PdC post was thwarted by the Maverick. Because of the constant foul weather we made do with fleeting glimpses of the Tour caravan and peleton rather than stand in the rain, and to add insult to our misery our camping neighbours (a lovely family from Yorkshire attending their first bike race) were in the exact spot that Gerro's mate Talansky crashed out. They were disgusted at the way he was yelled at to 'get back on his bike' by his DS...not sure if it was Vaughters or Wegelius but they gave him a piece of their mind...bless 'em :-)

We watched the finish in a tent full of smoking Dutch cyclists drinking cheap beer and overcooked sausages.

Another wet night in the tent and the consensus was 'fuck the Tour' so we did a wonderful loop of two of the trois ballons. The scenery in the Vosges/Alsace is to die for (when you can actually see it) and perfect for cycling. We found some nice little lanes with 15% plus gradients to try out the new gearing, most of them led to little old ladies with bent backs tending veggie gardens who gave us strange looks as we passed. 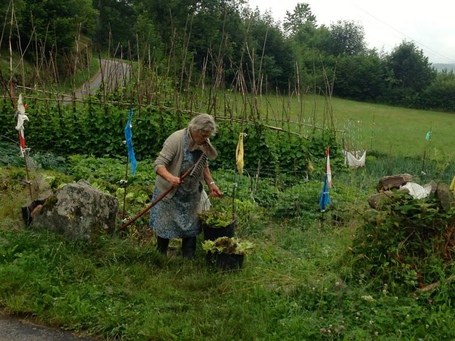 Rob had to head back to work so Con and myself headed South in search of sun. We found Oyonnax but couldn't find a spot to stay the night (it was 'sort of my birthday' and Bastille Day) but we stumbled upon Nantui and spent the night by the lake. At dinner that night we amused a couple of local (and very pretty) girls when I ate Con's entree very slowly by mistake while I was waiting for my main course which didm't seem to be forthcoming. They educated us in local culinary etiquette and translated the dessert menu for us. It was nice of them to put on fireworks over Lake Nantui for my birthday :-) 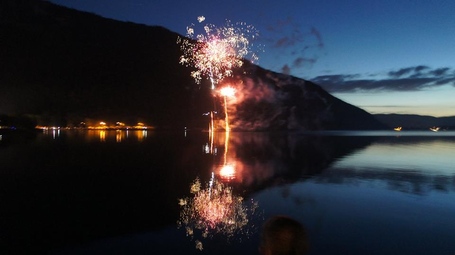 The girls did however provide us with a local cycling route for our morning's ride and unbeknown to us was actually part of the finishing route for the day's stage. We stopped for coffee at a little place called Lac Genin to be told that Greg Lemond was staying there...good job he was still asleep as we both had LiveStrong outfits on. 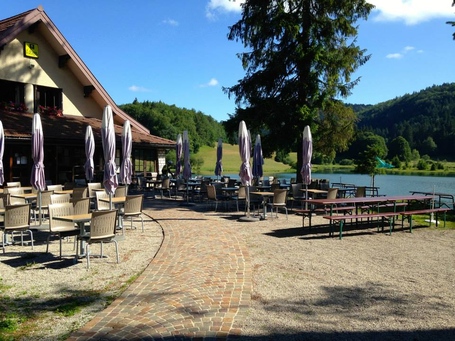 Time to head to the Alps. By this stage I was beginning to realise that the trip I had planned I had planned for one and giving in to my travel mate's wishes was limiting my adventure but as I had asked him along it was only right. There would be no roughing it on stage routes to wave the peleton by and more 'travel where the GPS tells me to go' rather than following sun.stars and the lie of the land....oh well!

En-route to the Alps we stopped at a nice place called Lake Annecy if anyone has ever heard of it. 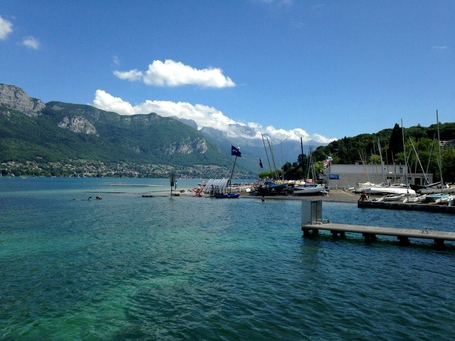 The GPS route from Annecy to Briancon took us on auto-routes and we ended up at a tunnel that was going to cost us 60 euros to pass through. A quick shake of the head and a quick look at my map took us over the stunning scenery of the Col de Telegraph and Col de Galibier...I was so happy I was out chasing marmots and Con was hanging on for dear life as i gave the T5R a fang through the switchbacks.

Briancon is an amazing town with it's history and scenery and a great base for any alpine cycling trip. The next three days were spent riding Cols in the mornings, watching the tour in local bars in the afternoons and walking around to take pictures and find new eateries at night. I rode the Col's L'Eschelle, D'Izoard, Galibier and Lauteret. 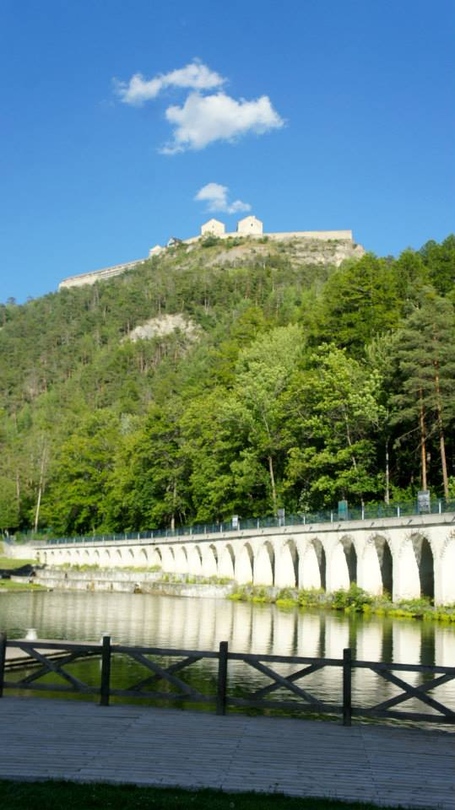 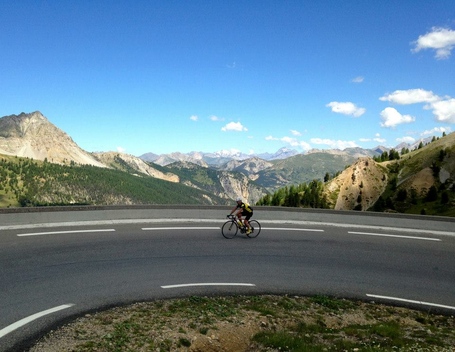 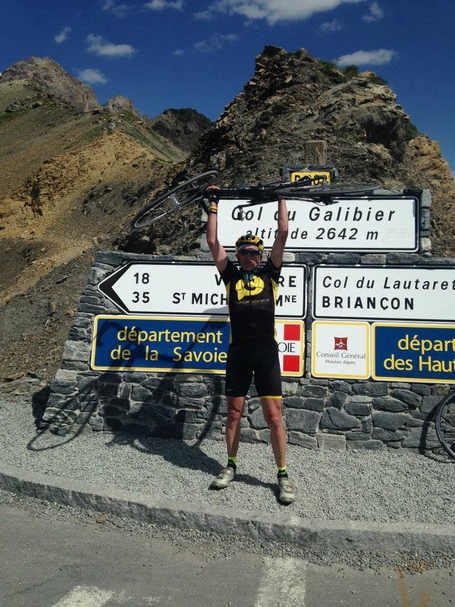 I also got to see some cyclist ride past......but you guys see enough of those pictures :-) 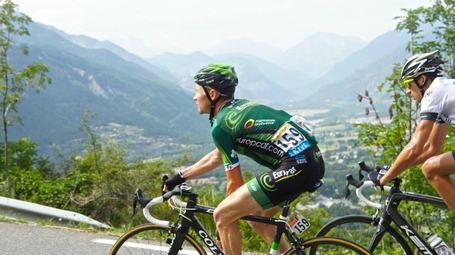 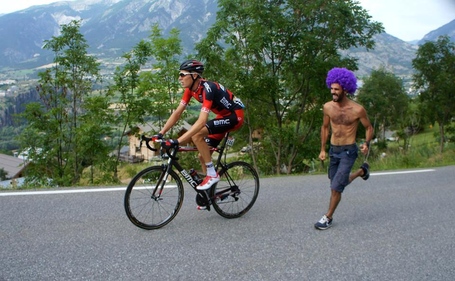 I'm currently in a hotel room in Argeles Gazost laid up with my second bout of Froggy Belly which is how and why I've had time to do all of this.....however, it's not a bad place to be laid up. I can see the camper vans lining up on the Hautacam already. 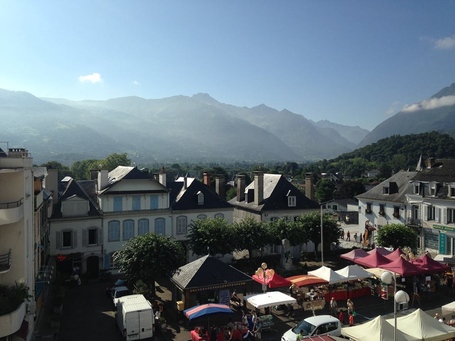