The second stage in the Pyrénées, and what a barn burner this one is. At a mere 124.5 kilometers, it may sound like a walk in the park - after all that's barely longer than the processional stage into Paris. But this one has the most climbing per kilometer of stage in all the Tour. Three category one climbs serve as a mere appetizer for the finish on the Pla d'Adet, a hors categorie ascent of 10.2 kilometers at 8.2% with several kilometers averaging over 10%. The preceding climb, the Col de Val Louron Azet, is no easy one either with three kilometers at the beginning averaging over 9%. In short, nothing about today is easy. 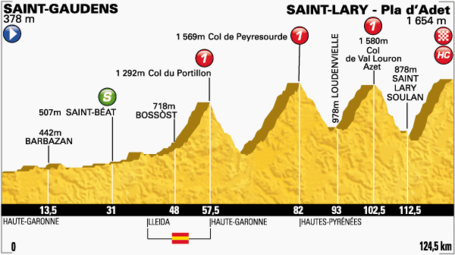 In recent years the organizers of the Tour have opted to begin including shorter stages in the mountains. The hope is that the shorter distances will encourage more aggressive racing earlier out rather than just a showdown on the final climb. With hardly any distance between the end of one descent and the beginning of another climb, tomorrow offers a perfect chance for some early aggression, especially in the four way battle between Alejandro Valverde, Thibault Pinot, Romain Bardet, and Jean Christophe Peraud for the podium spots behind a serenely reigning Nibali. Valverde in particular seems antsy to use his strong Movistar team to crack things open and help secure his second place overall. AG2R could also try to push Pinot's questionable (though, increasingly less so) descending skills as they race towards the final climb. And once we hit the final climb, whatever group remains together will have a knock down drag out brawl, especially if they are *relatively* fresher than at the end of earlier mountain stages.

The odds of the break surviving tomorrow are low with the short distance and motivation of the teams currently sitting 2-5 on the GC. So, my pick for the winner is Thibault Pinot. He seems a little sharper than Bardet and Valverde on the climbs right now, and Nibali might very well let someone else win for a change. With four minutes in hand, he doesn't have incentive to chase that hard, or to attack if he's feeling good. Better to save it for Saturday.

Our grape today is Mauzac. Mauzac is mainly grown in the Gaillac and Limoux regions in the southwest of France.Mauzac buds and ripens late, and was traditionally picked quite late, when temperatures had dropped in Limoux. This allowed for slow fermentation which preserved residual sugar for a "natural" second fermentation in the spring, creating a sparkling wine.