Things are getting desperate for a few guys now with the big ol' nasty 52 km time-trial looming on the horizon. Today offers the last opportunity to build a better buffer to the the more competent time-trialists behind them in the competition. Luckily they still have this to work with: 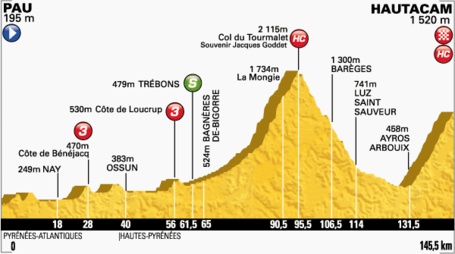 This is a pretty standard template decisive mountain stage. One big HC climb, in this case the Tourmalet, to soften people up followed by a finish on another HC climb. The Hautacam is pretty much a perfect "racing climb" as it is hard enough to offer opportunities for attacking by the superior climbers but it's not crazy-hard in such a way that getting up is merely a matter of slow, grinding survival (Zoncolan, I'm looking at you...). Sadly the Hautacam doesn't bring up the best memories in terms of worthy winners but maybe we can start a new leaf this year? 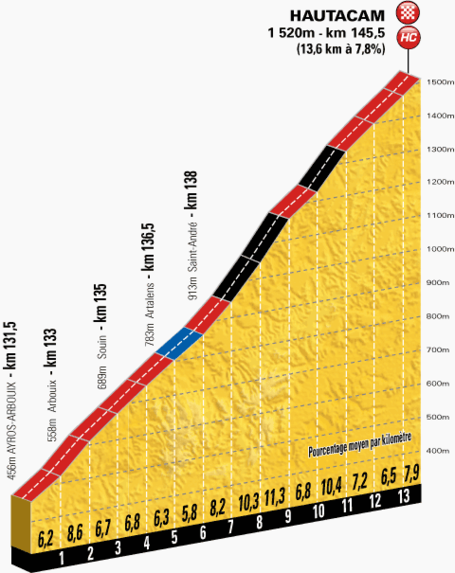 The top half is really where the Hautacam kicks in and unless we have seen someone try something outrageous already on the Tourmalet, this is where the race will be decided. The podium could be won and lost in those last 7 kilometers of climbing in the 2014 TdF. This is where Riis displayed his 60% power to brutalize Indurain et. al to "win" in 1996. In 2000 Armstrong made the process short with Pantani before he picked off all the attackers one by one, just missing Javier Otxoa who survived from the breakaway to "win" the stage and effectively the Tour. Last time we were here the Schlecks put the swords to Cadel Evans setting up the double threat that eventually won Sastre the TdF (and of course Saunier Duval ran away with the stagewin in glorious fashion). That time CSC/Saxo started ripping the race apart already on the Tourmalet and theoretically we could see teams like Movistar or Ag2r trying something similar if the situation really calls for it but at this point the riders really know where they have each other and we'll probably see a more conservative approach.